British Labour: The Future is Ours to Make, Together

Today we are launching the most ambitious and radical campaign our country has ever seen to bring real change to our country.

If you want to live in a society that works for everybody and not just the billionaires, if you want to save our hospitals, schools and public services from Tory cuts and privatisation, if you want to stop the big polluters destroying our environment then this election is your chance to vote for it. 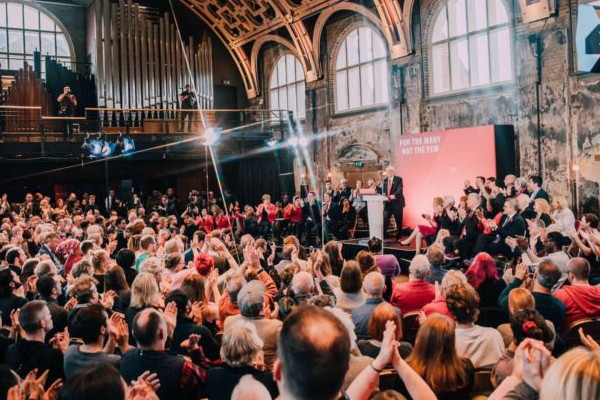 The choice could not be clearer. We put our faith in the British people’s spirit and commitment to community. It’s your country. That’s why we stand with you.

Labour will put wealth and power in the hands of the many. Boris Johnson’s Conservatives, who think they’re born to rule, will only look after the privileged few.

They’ve slashed taxes for the richest and slashed vital services and support for everyone else. But real change is coming.

This election is a once in a generation chance to transform our country, to take on the vested interests holding people back and ensure that no community is left behind.

Some people believe that real change isn’t possible. They say that we’re asking too much. Really?

A health service people can be proud of, where tens of thousands of cancer patients aren’t waiting months for treatment and prescriptions are free. Is that asking too much?

A social care system that doesn’t leave our older people isolated and afraid, but gives them dignity with free personal care. Is that asking too much?

How about a decent pay rise? A real living wage of at least £10 an hour, right away including for young workers from the age of 16. Is that asking too much?

Secure homes that families can afford, rents that don’t break the bank and an end to rough sleeping. Is that too much to ask?

Thirty hours’ free childcare for all two to four year olds. A good education, from cradle to grave, as a right not a privilege and no tuition fees. Is that too much?

Ending the Conservatives’ great rip-off by putting rail, mail and water into public ownership so they work for everyone, not just Tory donors and shareholders in tax havens. Is that asking too much?

What about real action on the climate crisis by creating hundreds of thousands of new, green energy jobs in communities where they’re most desperately needed?

No, that’s not asking too much. Because we have to radically change course now to avoid living on a hostile and dying planet.

This election is our last chance to tackle the climate emergency with a Green Industrial Revolution at the heart of Labour’s plan to transform Britain.

Friends, today is the 31st of October, the day Boris Johnson promised we would leave the EU. He said he would rather be “dead in a ditch” than delay beyond today. But he has failed. And that failure is his alone. You can’t trust Boris Johnson.

After three long years of Brexit division and failure from the Tories, we have to get this issue sorted. We need to take it out of the hands of the politicians and trust the people to have the final say.

Labour will get Brexit sorted within six months. We’ll let the people decide whether to leave with a sensible deal or remain. That really isn’t complicated.

We will carry out whatever the people decide so that we can get on with delivering the real change Britain needs after years of Conservative cuts to vital services and tax handouts to the richest.

Labour is determined to bring a divided country together, while the Tories and the Liberal Democrats only seek to divide us further.

The Lib Dems want to cancel a democratic vote with a parliamentary stitch-up and Boris Johnson’s planned trade deal with Trump will mean yet more National Health Service (NHS) money taken away from patients and handed to shareholders.

Despite his denials, the NHS is up for grabs by US corporations in a one-sided Trump trade sell-out.

Channel 4 Dispatches revealed this week that the cost of drugs and medicines has repeatedly been discussed between US and UK trade officials. Remember Johnson’s famous promise of £350-million a week for the NHS? Well his toxic Brexit trade deal with Trump could hand over £500-million a week of NHS money to big drugs corporations.

We will stop them. Labour won’t let Donald Trump get his hands on our National Health Service. It’s not for sale, to him or anyone.

Johnson’s sell-out deal would lead to years of continuing negotiations and uncertainty. Labour will get Brexit sorted by giving the people the final say in six months.

Britain needs to get beyond Brexit and deal with the damage done to our communities by a decade of Tory cuts and economic failure.

I travel all around our country and listen to people. This is what I learn from them: they don’t see politics like the media and political class do.

After a decade when real wages have fallen, for too many people, what they see is the community they love being run down through years of deliberate neglect. The evidence of a decade of economic vandalism is all around them.

It’s there in the boarded up shops. In the closed library and swimming pool. In youth centres that have closed their doors. The high street like a ghost town. The elderly couple who are scared to walk down their road because violent crime has doubled. The army veteran sleeping under blankets in a doorway. People struggling to make ends meet. The mother and her children eating from a food bank because they’ve been forced onto Universal Credit. That’s the evidence of Conservative cuts. Well I say, no more.

Labour will end damaging Tory austerity and scrap Universal Credit. We’ll tear down the barriers to success that the Conservatives have put in people’s way.

We will invest in every nation and region, rebuild our public services and give our NHS, schools and police the money they need by taxing those at the top to properly fund services for everyone.

We will give people back their pride in their communities and give everybody the quality of life they deserve. And by everybody, we mean everybody.

And you know what really scares the elite? All of us, the British people. What the elite are actually afraid of is paying their taxes.

So in this election, they’ll fight harder and dirtier than ever before. They’ll throw everything at us because they know we’re not afraid to take them on.

And the big question of this election is: whose side are you on? Are you on the side of the tax dodgers, who are taking us all for a ride? People who think it’s OK to rip people off and hide their money in tax havens so they can have a new super yacht.

Or are you on the side of the children with special educational needs who aren’t getting the support they deserve because of Tory and Lib Dem government cuts?

Whose side are you on? The dodgy landlords like the Duke of Westminster, Britain’s youngest billionaire, who tried to evict whole blocks of families to make way for luxury apartments? Or the millions of tenants in Britain who struggle to pay their rent each month?

Whose side are you on? The bad bosses like Mike Ashley, the billionaire who won’t pay his staff properly and is running Newcastle United into the ground? Or his exploited workforce like the woman who was reportedly forced to give birth in a warehouse toilet because she was terrified of missing her shift?

Whose side are you on? The big polluters like Jim Ratcliffe, Britain’s richest man, who makes his money by polluting the environment? Or the children growing up in our cities with reduced lung capacity because of choking pollution?

Whose side are you on? The greedy bankers like Crispin Odey, who makes millions betting against our country and has donated huge sums to Johnson and the Conservative Party? Or are you on the side of working people who create the wealth that’s then squirreled away in tax havens?

And whose side are you on? The billionaire media barons like Rupert Murdoch, whose empire pumps out propaganda to support a rigged system. Or the overwhelming majority who want to live in a decent, fair, diverse and prosperous society?

You know whose side Labour’s on – a Labour government will be on your side. Together, we can pull down a corrupt system and build a fairer country that cares for all.

And we have something that the Rupert Murdochs, the Mike Ashleys, and the Boris Johnsons don’t have. We have people. Hundreds of thousands of people in every part of our country who will make this the biggest people-powered campaign in history.

We’re young, we’re old, we’re black, we’re white, we’re straight, we’re gay, we’re women, we’re men, we’re people of all faiths and none, from the North and from the South. And when Labour wins, the nurse wins, the pensioner wins, the student wins, the office worker wins, the engineer wins. We all win.

Well, I say this: Labour will be out there in every city, town and village with the biggest and most confident campaign that our country has ever seen, bringing a message of hope and change to every community.

Even if the rivers freeze over, we’re going out to bring about real change for the many, not the few. All we need to keep us warm is the thought of removing Boris Johnson’s Conservatives from government – and the chance to rebuild and transform our country.

This is the most radical and exciting plan for real change ever put before the British electorate. Friends, the future is ours to make, together. It is now time for real change. •