California of Fire and Profit

California is burning. This sentence is all too familiar by now, a kind of mantra that is repeated every year with the onset of “fire season,” when live television broadcasts start to show homes threatened by flames and the wails of fire sirens cutting through the sweltering air. 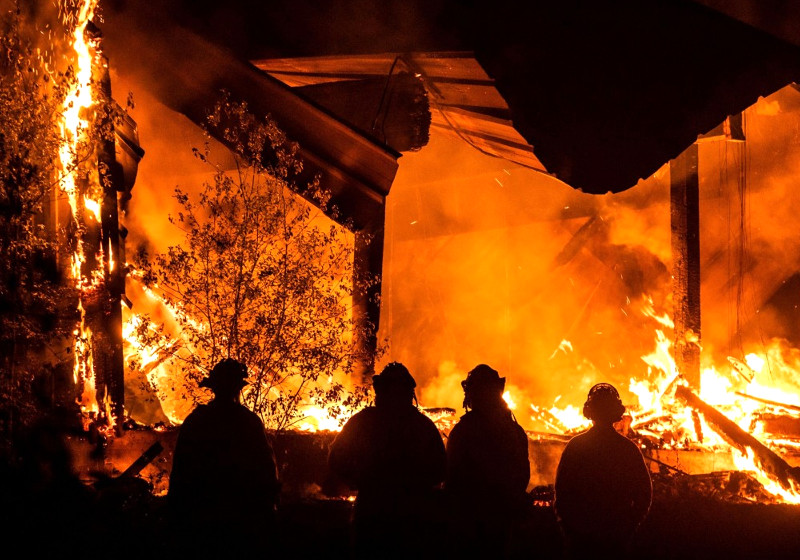 This year as well, the fires have targeted mainly the cities of wine country above San Francisco and the upscale neighborhoods on the west side of Los Angeles. Both regions have been hit by blazes fanned by the desert winds that kick up every fall here, with an ominous rustle of leaves that is a harbinger of more and more devastating disasters.

Two years ago, the “Diablo winds” blowing in the north of the state caused a firestorm that consumed 1,200 homes in Santa Rosa. The fire reduced the town of Snoopy to less than a ghost town, with nothing left but row after row of blackened foundations on gray ash-covered plots, the only remnants of the suburban homes abandoned by the thousands of fleeing residents.

Last year, the Santa Ana winds pushed the flames toward Malibu, sowing panic among the Hollywood glitterati: among the dwellings that went up in smoke were those belonging to Kim Basinger, Miley Cyrus and Neil Young. But the real tragedy took place 500 km further north, in the town of Paradise, which was turned into an inferno worthy of a Stephen King novel, engulfed by a wall of flame which also cut off the only exit road, trapping hundreds of cars that were trying to escape to safety. It was a tragedy that took the lives of 85 people.

The Plains of Id

History keeps repeating itself, worse and worse every time – partly because of human pressures affecting ecosystems in which fires, much like in all Mediterranean-type areas, are part of the ecological cycle of growth, drought and natural fertilization, something to which the local fauna and native vegetation have adapted. This cycle, however, cannot accommodate the permanent presence of villas, SUVs and golf courses (“the Plains of Id,” as the architect Rayner Banham memorably described this architecture born of hubris and wealth).

The evacuations and scenes of mass panic are partly a result of a pattern of consumption-driven urban growth which is simply unsustainable, and whose unsustainability is all the more evident now that these phenomena are being exacerbated by climate change.

The 200,000 displaced persons in California have joined the ranks of all the victims of hurricanes and floods across the world who are suffering the effects of a climate out of balance.

These are alarming symptoms of a climate crisis already taking place right before everyone’s eyes, including the politicians hell-bent on regressive policies, or, as in the case of the current US administration, devoted to militant denialism in the name of development (and the fat checks they get from the industrial lobby). The climate crisis is already here – without the immediate catastrophic impact of a meteor strike, but with the inexorability of a car crash in slow motion – as California’s ashes are unmistakably spelling out.

This year, the fires were accompanied by another, unprecedented problem: blackouts that have left millions of people without power in at-risk areas. The story behind them starts with the fact that in recent years, many forest fires have been caused by damaged power lines. In 2017 alone, 18 blazes were confirmed (and a further 12 are likely) to have been caused by sparks due to short circuits when power lines were brought into contact with trees by the high winds. This year, the power companies tried to get in front of the problem by voluntarily cutting the power supply.

It was an “unprecedented” and desperate measure that highlights the state of deterioration and obsolescence of a power infrastructure that is almost entirely unprotected, consisting of wooden poles and trusses which can be seen across the state supporting tangles of power lines that look almost exactly as they did a century ago (for a total of 40,000 km of high-voltage cables and another 380,000 kilometers of household voltage lines).

These intentional blackouts for prevention purposes have caused countless problems, without being able to prevent the start of new fires. It’s a case which sheds light on the equally untenable condition of capitalism applied to public administration. Much of the state’s power grid is in private hands.

The energy sector in California is organized in a mixed system. Around one third is the responsibility of public companies, such as the Department of Water and Power (DWP), but over two-thirds is controlled by private utilities, such as PG&E (Pacific Gas and Electric) and California Edison: publicly traded companies that have been given the public utility service in concession, in a sector where competition is nothing more than an illusion.

Like every private corporation, these companies have one overarching goal: to maximize their profits. Instead of modernizing the network, for example, PG&E has chosen to pay lavish bonuses to managers and dividends to shareholders, as well as $50-million on lobbying to influence the political authorities. In other words, PG&E behaved exactly like every other corporation with a guaranteed market and a de facto monopoly.

This model of privatized profits and socialized costs is the same one that has allowed Wall Street firms to speculate and reap enormous profits, while always counting on the public coffers to bail them out in a crisis. In the case of PG&E, the enormous damages they have had to pay for the fires caused by their infrastructure have led the company to declare bankruptcy, a condition from which it will have to be bailed out with public funds in order to ensure the continuous supply of electricity.

The logic is the same as that underlying the US system in which public health is left completely in the hands of private insurers (with their hefty profit margins), and it’s the same logic which allows, for instance, Facebook to reap huge profits by providing services that also have profound side effects on public life.

However, the vicious cycle of neoliberalism is rarely as evident as in the case of the entirely predictable Californian disasters: a fatal combination of infrastructural deficiencies, climate change and the privatization of public services, which threatens to bring the state to its knees.

Over the last week, Governor Gavin Newsom – who has declared a state of emergency – has often railed at length against the private companies and the responsibility they bear; however, there’s not much that can be done in practical terms short of nationalizing these utilities. •

Luca Celada is a freelance writer and reporter. Follow his tweets at @lucacelada.