Globally, human societies are veering toward the precipice of a cascading extinction event that is traceable to 20th century wars and to accelerated dangers following the end of the Cold War. This pivotal time could have seen the end of nuclear weapons and the near elimination of greenhouse gas emissions. Instead, the major nuclear weapons states are modernizing their arsenals, and greenhouse gas emissions since 1990 surpass cumulative emissions since the beginning of the industrial revolution. From 1990, transformations of global militarization have proven to be both a cause and effect of interconnected crises. Israeli militarization, inflicted on Palestinian people and territory, has been integral, and at times a groundbreaking catalyst, facilitator, and collaborator in this global disaster. Post-Cold War Israel put its so-called peace process in “formaldehyde” (in the words of Dov Weisglass). 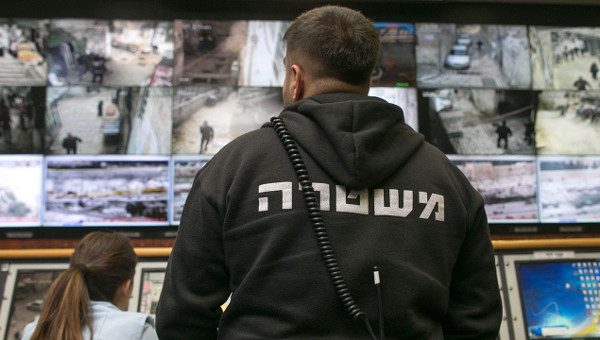 Jeff Halper, a founding member of the Israeli Committee Against House Demolitions, an anthropologist and activist, has long challenged spurious representations of Israel as victim and as a “light unto nations.” He describes Israel’s “matrix of control” and documents the revolution in military affairs (RMA) and Israel’s carving out an indispensable global niche in the sector of securocratic technologies and strategies. The battlescape encompasses the traditional spectrum of the battlefield and also the new dimension of space and the “human terrain,” the electromagnetic spectrum, cyber space and information space. Conventional wars aimed to achieve regional or global hegemony; securocratic wars aim to “securitize everything.” Israel positions itself as indispensable in the areas of nuclear weapons, in securocratic and conventional warfare, and in strategy and law.

The end of the Cold War coincided with shifts in sovereignty and ideology. Twentieth century sovereignty rested principally with nation states, with influential political and economic power distributed unevenly within three socio-economic classes in democratic, communist, and fascist regimes. In contrast, 21st century sovereignty rests especially in a global NATO, in national security bureaucracies, and in financial institutions that cause unprecedented inequity and deprivation for the majority population. Ideology is often reducible to a Manichaean battle between “good” and “evil” in which anything and anyone, the “other,” is a “threat multiplier.” In practice, the powerful are free to assault with disproportionality in the name of security and self-defense.

Despite attempts to establish sovereignty at an international level to “end the scourge of war” through the League of Nations (1920–1946) and the United Nations (UN), the majority world population is still not served by any universal institutions that are able to implement an end to the system of nationalism, capitalism, fossil fuels, racism, and militarism. The very structure of the UN entrenches authoritarianism and militarization: the five permanent members of the Security Council, each with veto power, are the original nuclear weapons states (China, France, Russia, the United Kingdom, and the United States). Seven of nine nuclear weapons states are not members of the International Criminal Court: USA, Russia, China, Israel, India, North Korea and Pakistan.

Navi Pillay, former head of the UN Human Rights Council, spoke of UN Security Council failures to bring peace and to save lives: “I firmly believe that greater responsiveness by this council would have saved hundreds of thousands of lives.” She cited conflicts in Afghanistan, Central African Republic, the Democratic Republic of the Congo, Iraq, Libya, Mali, Somalia, South Sudan, Sudan, Ukraine, and Gaza. “These crises hammer home the full cost of the international community’s failure to prevent conflict. None of these crises erupted without warning.”

Israel’s nuclear weapon secrecy mirrors little children hiding in plain sight, except little children innocently and charmingly believe that no one can see them while Israel’s “secrecy” tauntingly communicates a sense of entitlement to destroy. Israel’s arsenal is variously estimated to be between 80 to 400 nuclear warheads. Israel is not a signatory to the nuclear Non-Proliferation Treaty (NPT), yet Israel was allowed to participate and determine the focus of the 2015 five-year UN NPT conference held during the Ukraine/Crimea crisis. With fears of a nuclear conflagration between the USA and Russia, the aim was to take nuclear weapons off high-alert status, but Israel deflected attention to the purported threat of Iran, and the NPT review conference was a failure as a result.

Post Cold War, Israel plays an indispensable part in the new global securocratic shift from inter-state conflict to pacification of “disrupters.” Described by forensic architect Eyal Weizman, the war on terror is the backdrop that allows “the exchange of technologies, mechanisms, doctrines, and spatial strategies between various militaries and the organizations that they confront, as well as between the civilian and military domains…”

Israel’s “operations” against Gaza involve the “limited use of unlimited force”: a multilayered effort to inflict the greatest damage possible on terrorists and their weapons systems, their infrastructure, support networks, financial flows, and other means of support. Civilian villages are treated as military bases.

Israel, using assaults on Palestinian territory as a lab, sells its “battle-tested” high-tech cyber-security technology, drones, unmanned aerial systems, missiles, radars, and electronic warfare systems. Under “precision engagement,” Israel takes the lead in Unmanned Surface (naval) Vehicles and Unmanned Ground Vehicles, Fighting Robots, and Directed-Energy Weapons (lasers, high-powered microwaves, particle beams and advanced optics). Scientific and “cute” terms for weapons systems that penetrate and desecrate body boundaries are sold at the world’s arms fairs: biometric templates for fingerprints and retinal and facial measurement; joy sticks are remote killing devices used to “Spot and Shoot.” Killer and surveillance drones are called BirdEye, Skylark, Ghost, Bat, and Mini-Panther. Entomopters are bug-sized devices that carry out “precise, deadly strikes without sending its own soldiers into danger”; the Mosquito, weighing only 450 grams, can range up to two kilometers and can activate a “hive” of three JUMPER canisters, each containing eight missiles that can deliver several possible warhead options up to a range of 50 km. Snake robots of varying sizes, equipped with cameras and occasionally explosives, can be deployed in contested buildings for surveillance, “or potentially, to implant poisons or debilitating devices in targeted individuals” (Halper, p 131-33). 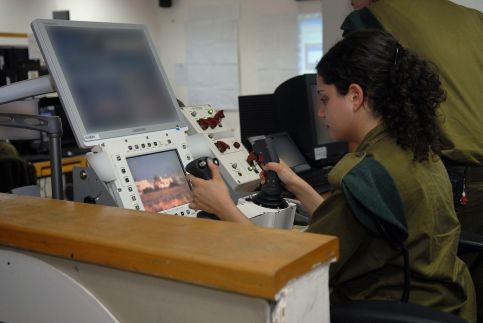 The Israeli systems of civilian pacification and policing are used in Central Asia and Latin America (particularly Brazil) for whom “militarized homeland security fits domestic needs more than a military geared to fighting inter-state wars… [to] pacify and control hundreds of thousands of people from working class” and poor neighborhoods, to control crowds and mass civilian demonstrations. Halper describes “wars of dystopia that assume that ‘perfected’ liberal democracies are threatened by an invisible, infiltrating menace…drug dealers, terrorists, asylum seekers, undocumented immigrants and microbes.”

Israel’s arms exports have increased by 74 per cent since 2008. Some of Israel’s joint projects are with Hindustan Aeronautics Limited and Rafael and Israel Aerospace Industries IIAI) to build an integrated anti-missile system to be deployed against Chinese nuclear and conventional missiles. A Canada-Israel joint project is Frontline Robotics of Ottawa with IAI’s LAHAV division and ODF Optronics of Tel Aviv, and the unmanned ground vehicle Border Protector is a US-Israel project.

Todd Miller, author of Empire of Borders, writes that “borders are everywhere that the ruling classes meet the people, the rich meet the poor, the powerful meet the dispossessed,” and that Israel is a microcosm of the whole world. Israel is selling a security state. In 2014 Elbit Systems received a prime contract from US Customs and Border Protection (CBP) for surveillance along the US-Mexico border, including 53 towers equipped with cameras that can see 7 miles away, ground-sweeping radar systems that feed into command and control rooms, thousands of implanted motion sensors, and a GPS system able to home in on exact coordinates of any border transgression. Elbit Systems surveillance drones fly over US borderlands, and Israel trains border officials and US law enforcement agents.

The military is exempt under the Kyoto Protocol, yet the military is the largest single institutional emitter of greenhouse gases. An ignored source of emissions are the massive data centres (server farms) for sending and receiving information from weapons and surveillance systems.1

Richard Falk, previously UN Special Rapporteur on Human Rights in the Occupied Territories, writes that drone warfare and surveillance have ushered in a new lawlessness; in the global battlefield, wars have no true endpoint, and everyone, including citizens and residents, are potential enemies. New fascistic trends include large investment in secret global surveillance systems in which drones are a no-risk weapon deployed in the name of “security.”

Eyal Weizman writes of a degraded moral category of “least possible evil,” a permissible evil if it prevents an even greater crime. A grim irony is the view that the Nazi genocide was the worst evil because it was uniquely methodical, scientific, and technological, yet Israel’s proclaimed cutting-edge precision methods of control and killing are morally unquestioned. The military aim is full-spectrum dominance over all movement on the ground, air, and sea, and inside body and mind. Most often, what Israeli leaders say and do causes no moral discomfort. Former Israeli Prime Minister Golda Meir’s was able to say, “We can forgive the Arabs for killing our children. But we can never forgive them for forcing us to kill their children. Peace will come when the Arabs will love their children more than they hate us.” Shaul Mofaz is known as the “butcher of the Jenin refugee camp” who “mowed the lawn” of humans, and Shaked publicly called for the slaughter of Palestinian mothers who give birth to “little snakes.” Canada allowed Mofaz to speak and Ayelet to vacation in Canada but refused admission to Israel critic former British M.P. George Galloway and to pro-BDS peace activist US Colonel Ann Wright.

In 2004, over one hundred Israelis signed the Olga Document, expressing shame and guilt: “We are talking of a road that has not been tried hitherto: being honest with ourselves, with our neighbours and particularly with the Palestinian people – our enemies who are our brothers and sisters. If we muster within ourselves the appropriate honesty and requisite courage, we will be able to take the first step in the long journey that can extricate us from the tangle of denial, repression, distortion of reality, loss of direction and forsaking of conscience, in which the people of Israel have been trapped for generations.” Richard Falk speaks of a global morality beyond the nation state: “We as species need urgently to affirm the imperative of serving human interests and to recognize that this can only begin to occur if people are able to create a vibrant global political community that embraces the whole of humanity.” This would be revolutionary but do-able. •