The World Bank’s World Development Report (WDR), published every year since 1978, plays a similar role to that of the state of the union address in the US, in which the president hopes to keep the faith of the Congress and public. Its task is to persuade state leaders, policy-makers and academics, directors of industry and media commentators of the ever-expanding benefits of American-led globalization. Economic growth, liberalization of trade and openness to foreign capital are part and parcel of its project of integrating the world of production, trade and finance. 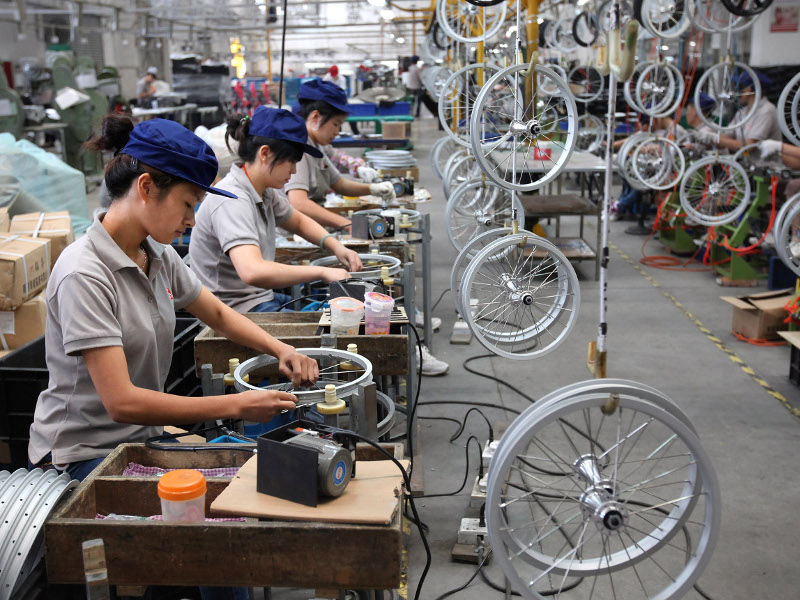 WDR 2020, “Trading for Development in the Age of Global Value Chains” (GVCs) published this month, is no exception. It boldly proclaims that GVCs “boost incomes, create better jobs and reduce poverty.” These positive effects it cites are achieved through two interrelated processes. Firstly, industrial production has become globally dispersed rapidly since the 1990s. Secondly, this dispersal generates novel possibilities for firms in developing countries to integrate themselves into increasingly high-tech international production.

In a world of GVCs, developing countries no longer need to establish entire industries. Through linking up with so-called lead firms, which are usually trans-national corporations (TNCs), they can access best-practice techniques and latest technologies, and match them with their competitive ‘factors of production’ of cheap labour and natural resources.

Since the 1990s, increased production and the trade of intermediate manufactured components has integrated the world economy in unprecedented ways. Hyperspecialization is the novel process, identified in the report, whereby supplier firms access advanced markets by focussing on the production of a limited range of components. This kind of sub-product specialization is organized through GVCs and coordinated by lead firms. By 2008, 52 per cent of world trade occurred under such arrangements.

Take bicycles for example. No longer are leading brands manufactured within one country. The Italian firm Bianchi undertakes its design work in Italy. Its bicycles are assembled in Taiwan and China, using components from Malaysia, Japan, Italy and China and other parts of the world. Each supplier is a component specialist, such as Japan’s Shimano, which provides brakes.

The consequences of this new global division of labour is articulated from a liberal perspective of mutual gains, at the start of WDR 2020: “[P]articipation in global value chains can deliver a double dividend. First, firms are more likely to specialize in the tasks in which they are most productive. Second, firms are able to gain from connections with foreign firms, which pass on the best managerial and technological practices. As a result, countries enjoy faster income growth and falling poverty.”

What could be better? The core message of WDR 2020 is that GVCs generate win-win outcomes – for lead and supplier firms, for employers and for workers, for developed countries (whose populations can access lower-cost goods) and for developing countries (which can, at last, experience the benefits of modern economic systems).

But dig deeper into the report, and the reality of global capitalism looks quite different. World Development Reports, just like state of the union addresses, have a distinctive two-track method of dealing with critiques of their position. The first is to ignore anything that would undermine their core message. The second is to recognize problems – such as poverty and environmental destruction – and pose solutions to them that reinforce their overriding project of global economic integration.

No surprise, then, that WDR 2020 does not respond to radical critiques of GVCs and the World Bank’s role in promoting them. An increasing body of scholarship has demonstrated how GVCs represent mechanisms for powerful lead firms to dominate and capture value from supplier firms. Such globally coordinated wealth transfer requires new mechanisms of labour control. Women workers are often preferred by supplier firms, because they are seen as easy to manipulate. In case after case, these workers do not earn enough to sustain themselves and their families and must engage in excessive overtime, or take other jobs to survive. Throughout WDR 2020 such observations are either ignored, or interpreted as incidental to the proliferation of lead-firm dominated GVCs.

Nevertheless, the report is unable to escape completely from the realities of global capitalism. With a little bit of intellectual digging, WDR 2020’s good news story becomes a revelation of globalization’s rotting sub-structure, justified by a liberal creed increasingly at odds with reality.

A much-vaunted rationale for firms in developing countries to become suppliers of lead firms is integration into productivity-boosting innovation networks, which keeps them at the cutting edge of the world market, delivers economic growth and above average profits. WDR 2020 begins its analysis of GVC firms’ profitability by stating how: “[S]ince the 1980s there has been a widespread rise in firms’ profits. In 134 countries, the average global markup increased by 46 percent between 1980 and 2016, with the largest increases accruing to the largest firms in Europe and North America and across a broad range of economic sectors.”

It might be expected that, given the power asymmetries between lead and supplier firms, the former would pocket the lion’s share of profits generated in GVCs. Indeed, WDR 2020 recognizes that the benefits from participating in GVCs may be distributed unequally. Crucially, however, it argues that the benefits are still greater than for firms that do not participate in GVCs. However, really existing global capitalism tells a different story, which even WDR 2020 cannot hide. It finds evidence that: “Although buyer firms in developed countries are seeing higher profits, supplier firms in developing countries are getting squeezed. Across 10 developing countries, the relationship between markups and forward participation is negative… in the textile and apparel sector.”

Furthermore: “the more intensely a firm is integrated into a GVC… the lower is its markup. As Ethiopian firms become integrated into GVCs, they also experience reductions in their markups’. Likewise, ‘[i]n South Africa, markups charged by manufacturing exporters are on average significantly lower than those charged by nonexporters.”

Such observations of how asymmetric power relations between firms within GVCs ensure value transfer from southern to northern world regions represent a staple of critical GVC analysis but this is never recognized by WDR 2020.

This ignorance of issues that cast a shadow upon the world of GVCs extends, most damningly, to the labour question.

WDR 2020 claims that GVC participation by supplier firms in developing countries can enhance workers’ incomes and livelihoods. The opening lines of the report waxes lyrical about Vietnam’s successful integration into the electronics GVC, recounting how: “Samsung makes its mobile phones with parts from 2,500 suppliers across the globe. One country – Vietnam – produces more than a third of those phones, and it has reaped the benefits. The provinces in which the phones are produced, Thai Nguyen and Bac Ninh, have become two of the richest in Vietnam, and poverty there has fallen dramatically as a result.”

The report ignores Samsung Vietnam’s record of labour rights violations. For example, in 2018 three UN inspectors found widespread maltreatment of its mainly female workforce. Based on in-depth interviews with 45 women workers, “researchers reported testimonies of dizziness or fainting at work from all study participants and high noise levels that violated legal limits. Miscarriages were reported to be common and workers reported pain in their bones, joints, and legs which they attributed to standing at work for 70 to 80 hours a week.”

WDR 2020’s ignorance of this case is a reflection of its big-business bias. It heralds lead and supplier firms as representing dynamic and innovative actors in the world economy. By contrast, workers are portrayed as bearers of labour, a ‘competitive’ ‘factor of production’ which can be used by developing country states and firms to attract foreign direct investment by TNCs.

Misconstruing Data on Productivity and Wages

Perhaps the lowest point of WDR 2020 is its selective use of data to support its win-win portrayal of the world economy. A core argument in the report is that participation in GVCs enhances supplier firms’ productivity and wages.

The report claims that the productivity of Labour increases because supplier firms receive technical assistance from TNCs. New production technologies and techniques lead to a higher level of output per worker. The increases in Labour productivity translate into rising wages.

WDR 2020 reports that “across a sample of developing countries, firms that both export and import pay higher wages than import-only and export-only firms and nontraders.” It supports this claim, citing an article by Ben Shepherd and Susan Stone. The report claims that the article finds that “firms with the strongest international linkages – export, import, and foreign-owned – pay higher wages.”

Not so fast. The purpose of Shepherd and Stone’s study is to provide “evidence on the links between Global Value Chains (GVCs) and labour markets, focusing on developing economies, particularly the OECD’s Key Partner countries (Brazil, India, Indonesia, China, and South Africa).” These countries account for the majority of workers employed in global value chains in developing countries. A positive link with wages is found for a large sample of 108 countries, but crucially, when the study focusses on these developing economies, they find that: “There is… no discernible impact of international linkages on wage rates in these data for the key partner countries… the effects of GVCs may be primarily felt in emerging markets through increased employment rates rather than higher wages.”

The simple message here is that in these countries, GVC integration is not associated with higher wages. As much of the critical GVC literature shows, productivity gains go to capital, not labour. Supplier firms across many developing world regions have drawn upon vast pools of low-cost labour to integrate themselves into GVCs. These workers suffer low pay, very long working hours, and dangerous conditions, as noted above in the example of Vietnamese Samsung workers.

WDR resorts to desperate measures to keep its good news globalization story on the road. Like a stumbling president delivering his state of the union address, it cannot contemplate that reality has caught up with it. WDR 2020 tells us less about trade and development in an epoch of global value chains than it does about the World Bank’s attempts to airbrush reality. •

Dara Leyden is a doctoral student in the School of Business and Management, Queen Mary, University of London. He is researching dynamics of social upgrading in the Thai electronics industry. He tweets at @daraleyden.