The Vilification of Jeremy Corbyn

The vilification of the leader of the UK Labour Party, Jeremy Corbyn, as an antisemite has intensified in the run up to the December 12 election in Britain. What makes this especially troubling, not to say bizarre, is that since he first became a member of parliament in 1983 Corbyn has been the most consistent campaigner against all forms of racism. 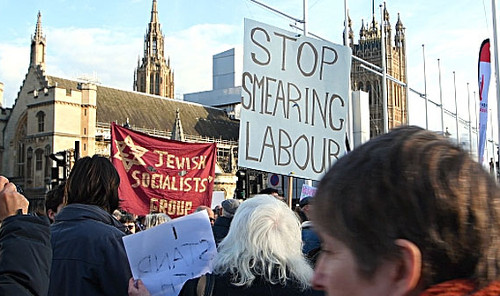 In fact, while still a local councillor in London in 1977 Corbyn had already organized a defense of the Jewish population of Wood Green from a neo-Nazi march. A recent compilation of the number of early day motions he advanced in Parliament to defend Jewish people, alongside other public stances he took to tackle antisemitism – to denounce Holocaust deniers, to commemorate Jewish resistance to fascism, to pressure the police to do more to protect synagogues against vandalism – came to well over 50. And he did all this not only in support of Jewish communities in the UK but also in Iran, Turkey, France, Russia and Eastern Europe. Indeed, the recently retired Speaker of the House of Commons, John Bercow, himself Jewish, unreservedly expressed his belief that Corbyn was in no way antisemitic, having in their 22 years in Parliament together “never detected so much as a whiff of anti-semitism” about him.

Indeed, there is no way that the antisemitic charge can be made any sense of except as a means of deflecting Corbyn’s support of Palestinian rights against actions by Israeli governments. The smear campaign has mainly involved pointing to intemperate language of others who spoke beside Corbyn at meetings about this over the decades. Scraping the barrel for anything he said himself, one comment Corbyn made about pro-Israeli government hecklers at one meeting not getting his “English irony” has been highlighted.

Given the weak reed this provides for the personal attack on Corbyn, attention has been focused on his allegedly not having done enough to weed out “institutionalized” antisemitism in his party, even though a parliamentary committee report on Antisemitism in the UK found “no reliable, empirical evidence to support the notion that there is a higher prevalence of antisemitic attitudes within the Labour Party than any other political party.”

To be sure, there are instances of antisemitic tropes (mainly on the ‘rich Jews’ theme) in some Labour-related social media circles, but much less than in parties of the right. In any case, Corbyn has done more to address this than any previous leader of any party.

Under his leadership, Labour grew to over 500,000 members; yet of some 1100 complaints of antisemitism the party received between April 2018 and January 2019 almost half were found to have nothing to do with the party, while another quarter were lacking in any basic evidence.

In Corbyn’s Own Words

In his leaders’ speech to the 2018 Labour conference, Corbyn spoke directly

“to all in the Jewish community: This party, this movement, will always be implacable campaigners against antisemitism and racism in all its forms. We are your ally. And the next Labour government will guarantee whatever support necessary to ensure the security of Jewish community centres and places of worship, as we will for any other community experiencing hateful behaviour and physical attacks. We will work with Jewish communities to eradicate antisemitism, both from our party and wider society. And with your help I will fight for that with every breath I possess.”

Later in the speech, when dealing with Labour’s foreign policy, he added:

“And let me next say a few words about the ongoing denial of justice and rights to the Palestinian people. Our Party is united in condemning the shooting of hundreds of unarmed demonstrators in Gaza by Israeli forces and the passing of Israel’s discriminatory Nation-State Law. The continuing occupation, the expansion of illegal settlements and the imprisonment of Palestinian children are an outrage. We support a two-state solution to the conflict with a secure Israel and a viable and secure Palestinian state.”

Rather than being traduced, Corbyn deserves to be praised for making it so clear that principled support for Palestinian rights does not preclude principled opposition to antisemitism. •