Two Reports: The British Political Crisis and the Labour Party

Britain’s Political Crisis: Problems and Possibilities for the Left

The British political crisis continues, with the latest developments consolidating the hard right takeover of the Tory Party and government that began with the Brexit referendum in 2016 and is now leading to the development of a potentially mass neo-fascist movement. This is taking place against the backdrop of similar developments across Europe and beyond.

The suspension of Parliament – a key stage in the UK process – has been defeated but Boris Johnson’s trajectory remains on track. The unanimous verdict of the Supreme Court, announced on Tuesday 24th September, was that Boris Johnson and the Tory government had acted unlawfully in proroguing parliament from the 9th September to the 14th October. It was for most an unexpected verdict and represented a deepening of the split within the establishment. The judiciary, or at least its most significant component, had sided with parliament against the government.

The most obvious and immediate effect was that parliament returned on 25th September and did not enter a recess for the Tory Party conference. This was a significant setback for the strategy of Johnson and his special advisor Dominic Cummings, and an opportunity for the Labour Party – not through their own efforts but through an individual’s legal challenge backed by other opposition parties.

The first instinct of the Johnson cabal has been to double down and attack the judiciary through the Tory press and in parliament. Johnson’s key ally Jacob Rees-Mogg has also attacked the judges calling their verdict a ‘constitutional coup’. No doubt this will harden their base in the Tory party, the Home Counties and the Northern leave areas, but it also creates a serious problem for them.

An important section of the ruling class are not yet disposed to attack the judiciary in this way and recognise the dangers for their class in the Cummings strategy. Moreover the re-opening of parliament makes the no-deal manoeuvres of the Tory government less likely to succeed. This strengthens the position of the Brexit party which is waiting in the wings. Cummings had hoped to undercut the Brexit party with a general election in the wake of a 31st October Brexit leading to a Johnson victory. The verdict of the judiciary therefore makes a Tory/Brexit Party electoral coming together more likely. It’s unlikely that the Tories now could win a majority in a general election without some kind of deal with the Brexit Party. In the old industrial areas there are sections of the electorate that would never vote Tory but are already willing to vote for Nigel Farage and co. Objectively, Brexit and the Brexit party are the mechanisms to split the working class and prevent a left alternative – Labour – coming to power.

Johnson was at the UN in New York when the Court judgement was announced, but before he came back to London he met publicly and privately with Trump. No doubt yesterday’s strategy – for how to handle parliament – would have been discussed and Trump is in no doubt that some kind of alliance between Farage and Johnson is necessary.

Johnson was forced to return to parliament and gave an aggressive performance in the House of Commons last night in which it became clear exactly what the labour movement – and indeed wider society – is facing. There was outrage at the insult to the memory of murdered MP Jo Cox – Johnson said the best way to honour her (she was a Remainer) was to deliver Brexit – and the taunting of MPs as traitors and surrender merchants. Today neo-fascists across social media have claimed him as their own and it is absolutely clear that he is building a base amongst the neo-fascists and far right. Wider sections of the population are now open to far right arguments.

Notwithstanding Johnson’s attempts to turn it to his advantage, the Supreme Court decision has been very significant as a mainstream blow to Johnson’s disgraceful anti-democratic actions. Of course it does little to alter the fundamentals – economic and political crisis and the shift to the right in British politics. Although it may be true that the mass of the population do not hold judges, politicians or parliament in great esteem we are not yet at the stage where there is a widespread support for dispensing with bourgeois democracy. Those who do wish to do that largely hail from the far right. The verdict has the effect of moving the Johnson cabal further out of the political and establishment mainstream; they will harden a base around them but they are more clearly identifiable for what they actually are. The crucial next step for the left is to confidently press forward, further isolate them and diminish and defeat their base.

Can the Labour Party do this, given its current failure to give a clear lead on key issues? At this week’s Labour Party conference, the atmosphere was relatively low energy, fractious and insular until the decision was announced from the Supreme Court. The conference had started with a ham-fisted bureaucratic manoeuvre to try and get rid of Deputy Leader Tom Watson and was swiftly followed by news of a senior policy advisor’s resignation. The Another Europe is Possible’s (AEIP) anti-Brexit position was lost because the conference was persuaded that it was a Trojan horse for the Blairite right in the party, who also back remain but on a different basis to the left Remainers, like AEIP. Corbyn’s ‘we aren’t either leavers or remainers but socialists’ line won in the hall. The problem with this is that an election campaign conducted on an anti-austerity basis is going to crash into the brick wall of Brexit. In effect it will be a one-issue election and to ignore that reality will be catastrophic.

The great danger is that the labour and trade union movement is proceeding as if nothing much has changed and this underpinned the support for the conference motion which essentially advocated sitting on the fence – the leadership’s preferred Brexit outcome at conference. There is a misguided belief that the coming election is going to be a reprise of 2017 where Labour broke Theresa May’s majority. Labour has now a much more radical policy programme than 2017 but is in a much weaker political position with poor showings in the opinion polls. At least part of this is because it doesn’t have a clear position on opposing Brexit.

So the decision of the judiciary has deepened the split in the ruling class and hardened up the no deal far right around Johnson and Farage. This is very dangerous politically, but it also opens up political space for Labour – which it is vital that it does not squander – and it creates space for political work from the radical left too. Over the past few weeks we have seen massive protests against Johnson’s closure of parliament – under the slogans ‘Stop the Coup’ and ‘Defend Democracy’; these were largely either spontaneous or organised by the anti-Brexit left. At the same time we have seen huge protests, including extensive civil disobedience, on the issue of climate change. Young people have led the struggles here as elsewhere, and now other movements are joining forces to support them.

So this is a period of intensive mobilisation across Britain, with sharper political divides – and a greater risk to our rights and democracy – than have been seen perhaps since the General Strike of 1926. The Labour Party and the radical left must rise to the challenge, in the interests of us all, for much is at stake. We are entering a struggle for the future: not just of this country but across the world. It is a struggle for humanity as a whole – for social justice, equality and economic democracy, to meet the needs of all peoples. •

This article first published on the Transform Network website.

It shouldn’t surprise many of us to learn that the recent Labour Party conference (Sept. 21 – 25 in Brighton, UK) was nothing remotely like the press and media reports. For them, it was a disaster: rival factions were tearing the party to pieces over Brexit and anti-semitism, and Jeremy Corbyn’s leadership was finished. This was not the conference I attended, as delegate from my constituency party. 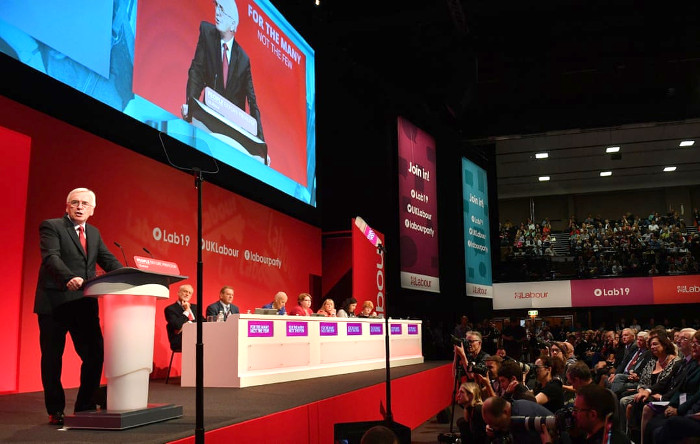 The first thing the media reports omitted to mention was the programme put forward in an advance preview of the coming election manifesto, in successive speeches by Labour shadow ministers including John McDonnell and Jeremy Corbyn. These were the most radical policies by far since 1945, including:

In addition, it was especially encouraging that a conference motion from the floor on immigration was overwhelmingly carried, calling for unlimited freedom of movement and voting rights for all residents.

The trade union delegations, wielding their block votes over the heads of their member activists, as usual played a very conservative role. It was their votes which upheld a draconic new bureaucratic rule providing for fast-track expulsions, and which defeated a proposal to restore Clause Four, the historic socialist clause in Labour’s constitution expunged by Tony Blair in 1994. In both cases, the constituency party delegates had voted overwhelmingly the other way. It was significant that some 60% of constituency delegates voted in favour of restoring Clause Four, compared to less than 1% of the trade union delegations.

The constituency delegates were an inspiration. The conference almost had the feel of a 1970s Labour Party Young Socialists conference. Labour has a genuinely radical mass membership. And since each of the 10,000+ members in attendance represented maybe up to fifty local activists, that could mean half a million people ready to go out on the streets campaigning for a Labour victory on a programme that would not just change Britain but transform the mood throughout Europe.

Having said that, we must face the sober reality: that the prospect of a Labour majority in the coming election is still far from guaranteed; that the ruling class will move heaven and earth to prevent the formation of a Labour government under Corbyn; and that even in that event overwhelming pressure would be exerted to frustrate, sabotage and wreck its programme. What this conference proved beyond doubt, though, is that there is a mass socialist working-class movement coming into being that will be ready to defend its interests. •

This article first published on the Oakland Socialist website.

Kate Hudson has been General Secretary of Campaign for Nuclear Disarmament (CND) since September 2010. Prior to this she served as the organisation's Chair from 2003. She is a leading anti-nuclear and anti-war campaigner nationally and internationally.

Roger Silverman is a member of the British Labour Party and a delegate to the 2019 Party Conference.