As Prime Minister Trudeau makes his first official visit to Mexico, writes Mining Watch Canada, “the Mexican Network of Mining Affected People” (REMA by its initials in Spanish) has issued a communiqué to call on Trudeau to live up to his commitments and stop the devastation of Indigenous and campesino communities that has enabled Canadian mining companies to make big profits.

“Canadian investment in Mexico – the principal destination abroad for Canadian mining investment after the U.S. – is expanding precisely in the most deadly places for anyone to get by on a daily basis, let alone speak out in defence of their land and wellbeing. As the future of the North American Free Trade Agreement is uncertain and Trudeau seeks to shore up a bilateral relationship with Mexico, it’s time to put words into action and answer for lives and livelihoods destroyed or at risk around Canadian mine sites.”

The text of the original communiqué follows. Translation by Mining Watch Canada. Footnotes have been converted to embedded links. The original text can be found here.

On the occasion of Justin Trudeau’s state visit to Mexico (12 Oct. 2017), the Mexican Network of Mining Affected People urges Canadian mining company invasion of Mexico to stop and withdraw.

Canadian Prime Minister Justin Trudeau has presented himself on the international stage as a democrat, a supporter of human rights and freedoms, and committed to fulfilling the UN Declaration on the Rights of Indigenous Peoples.[1] Although on this latter point it is important to mention that the government has taken a weak position, limiting its support for the declaration within the scope of the Canadian constitution, which is not minor, particularly if Canada continues to refuse to ratify Convention 169 of the International Labour Organization[2] and fails to respect the self-determination of Indigenous peoples in practice. 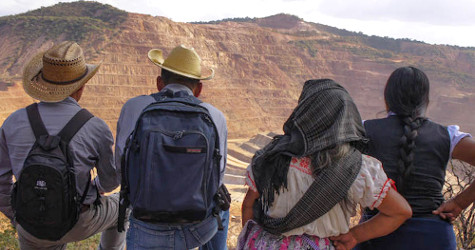 Trudeau’s visit to our country has been announced as an opportunity to strengthen commercial ties between Mexico and Canada, which is bad news for those peoples and communities who have been seriously affected by Canadian mining activities. Today, Canada has become the biggest source of foreign investment in mining around the world and in Mexico, to such an extent that 65 per cent of foreign mining companies in Mexico are listed in Canada. For Canada, Mexico has become the second most important destination for Canadian mining investment abroad, after the U.S., such that 11.3% of Canadian mining assets are in Mexico.

The power that Canadian mining wields in Latin America has been openly and arbitrarily promoted by Canada’s entire diplomatic corp along the lines of its “economic diplomacy” policy through its embassies. Like good colonialists, they continue to propagate racism and hatred toward Indigenous peoples and campesino communities when they encourage mining investment in an area such as Guerrero – where there is tremendous Canadian mining investment – and then issue alerts to Canadian tourists to avoid traveling to the same place, given the violence and risks that people live with there.

The political and financial weight of Canadian mining companies and the government is a reality that has been used to influence the promotion of constitutional reforms, laws and regulations in the extractive sector to help facilitate foreign investment, as well as to weaken and deny redress for harms, tax payments, or any other condition that might affect company profits.

In Mexico, this has led to an unconstitutional legal framework that violates human rights because, among other things, it gives mining priority above all over activities, which despite being undertaken pretty much exclusively by private companies is also considered in the public interest. This has meant dispossession and forced displacement of legitimate landowners, who when they try to defend their rights, these are denied by the very same companies or through the structures of illegal armed groups or in collusion with diverse actors in the Mexican government.

Health harms, environmental contamination and destruction, criminalization of social protest, threats, harassment, smear campaigns, surveillance, arbitrary detentions and the assassination of defenders are the formula for progress and development that Canadian mining investment has brought to our country. To counteract its brutality, in the media and among the spheres of power, companies gloat about their corporate social responsibility, clean industry certification or safe cyanide use, or their adherence to absurd standards of “conflict free gold” that are supported and certified by organizations largely created by the very same corporate sector.

To substantiate claims of dispossession, pillage, displacement and violence caused by Canadian mining companies, it is enough to visit the communities of Carrizalillo and Nuevo Balsas in Guerrero, Chalchihuites and Mazapil in Zacatecas, the northern highlands of Puebla, Tetlama in Morelos, or Sierrita de Galeana in Durango, as well as Chicomuselo, Chiapas, where Mariano Abarca was murdered for his opposition to a Canadian mining company, prior to which the Canadian embassy in Mexico was alerted to the risks he faced as they monitored the conflict.

The abuses of Canadian mining companies have been ongoing, repeated, and have violated human rights such as rights to territory, property, a safe environment, participation, consultation and consent, lawfulness and legal security. For example, we have seen the same company (Goldcorp) break the law repeatedly by purchasing collectively owned lands, first in Carrizalillo, Guerrero and then, three years later, in Mazapil, Zacatecas. Today in Mexico, Canadian companies are operating 65% or over 850 mining projects at different stages from exploration through to construction and extraction.

It is important to mention, Mr. Justin Trudeau, that the only thing that mining investment from your country has ensured for us is dispossession and the risk that thousands and thousands of communities and persons could lose their culture and identity as a result of destruction of their territory; the arrival of organized crime (whether or not companies are signed up to the bombastic conflict-free gold standard); as well as the escalation of violence, repression and criminalization of those who defend their territories and life.

In this context, REMA calls on the Canadian government to stop institutional and political support provided through your diplomatic apparatus to enable private Canadian companies to accumulate profits through dispossession. We also demand that you stop promoting policies and weak laws that legalize the activities of these mining companies, among them voluntary codes of conduct known as Corporate Social Responsibility, in place of mandatory compliance. Instead, corporate accountability is urgently needed to put a stop to the ongoing atrocities and illegalities that violate the human rights of Indigenous peoples and campesino communities.

In addition, beyond the positive accounts of the business sectors and government officials in defence of the North American Free Trade Agreement (NAFTA), it is important to mention that this pact has only helped to legalize dispossession, enabling more wealth to be accumulated by already wealthy sectors, as well as the gradual displacement of both products and local economies to stimulate a new form of accumulation and control, an increase in the deregulation of land ownership and dilution of protections over the public interest and public good, further enabling private pillage. In sum, the principal objective of NAFTA has been to disappear the countryside and campesino farmers.

Finally, Mr. Trudeau, we would like to remind you that well over a year ago, on April 26, 2016, various organizations including ours sent you a letter in which we requested you to kindly bring your attention to the context of human rights violations of Canadian companies in Mexico and Latin America, just shortly after you had assumed your mandate as Prime Minister when you committed yourself and your party to support human rights. To date, we have never received a response to this letter, nor seen any concrete actions to better protect human rights.

We will fight for territories free of mining!

Postscript: Canada’s role in promoting and defending its mining activities in Mexico, in violation of indigenous interests and rights, has not gone unnoticed in that country’s media. See, for example, this article in the Mexican daily La Jornada, October 13: “Justin Trudeau en México: frivolidad y decepción.”

The author concludes: “Sadly, after two years in power Justin Trudeau maintains a complicit inaction regarding the death and destruction provoked by Canadian mining companies, consistently aided in this plunder by the help they receive from a legion of corrupt specialists in the sale of our biocultural patrimony. Faced with this, the road to follow has been traced by many peoples in Mexico who have organized to declare their territories free of megaprojects of death, including mega-mining. We should expect nothing from Justin Trudeau other than huge disappointment.” (R.F.) •

1. See in particular Articles 10, 28 and 32, which require the “free, prior and informed consent” of the indigenous peoples concerned by projects impinging on their lands, territories and resources. The Supreme Court of Canada has ignored this requirement in some recent rulings.

2. Also known as the Indigenous and Tribal Peoples Convention, 1989.