In May 2019, production at De Beer’s Victor diamond mine on the traditional territories of Attawapiskat First Nation came to an end. In all, more than 8 million carats of diamonds were taken from the giant open pit mine that generating billions in revenues for the mine’s owners. But for many observers, the mine failed to deliver on its promise of prosperity for the near-by community. Indeed, while the company’s “tax and economic contribution reports” are keen to highlight the mine’s local procurement programs and the like, Attawapiskat continues to suffer from widespread poverty, unemployment and crumbling infrastructure. Just two months after the mine closed, the community declared an emergency over water quality. In 2013, documents showed that Attawapiskat’s diamond royalties, earned as part of an Impact-Benefits Agreement with the company, amounted to less than 1 per cent of the mine’s annual revenues. In 2018, the value of diamonds produced in Ontario reached $516-million, while royalty payments to Attawapiskat were just US$1.6-million.

The wider public did not retain a significant share of the diamond wealth either. Giving in to De Beers’ lobbying campaign, Ontario Premier Dalton McGuinty walked back his proposal for a diamond royalty on par with the regime in Northwest Territories, ultimately allowing the company to pay as little as $226 in royalties in 2014. While the company now boasts of having paid $110 million in total royalties to the province, it neglects to mention that this amounts to just 2.5% of the total revenues it earned from the Victor mine.

Promises of spin-off developments also appear to have not gone very far. The government of Ontario imposed a domestic processing condition on the mine, mandating 10 per cent of its output be polished in the province. But the secret diamond polishing facility opened in Sudbury to meet the province’s conditions employed just 45 workers, most of whom were temporary migrant workers from Vietnam.

The Victor mine was fraught with conflict. Now, even after the mine has closed, conflict continues: The company is seeking permission from the Ontario government to construct a third landfill site where it wants to dump the “waste” it no longer needs to turn a profit. Attawapiskat First Nation has every reason to firmly reject the proposal. — Bullet editors

De Beers Canada (DBC) is seeking Ontario Government approval for a third landfill waste site to be built and filled up at the Victor Mine Site, located in a vulnerable James Bay wetlands area, and in a place of critical importance to Attawapiskat. The Victor Mine is now in the closure phase, where decommissioning and remediation are supposed to leave the landscape in a clean and safe state. The mine operated from 2005 to 2019 and with an annual production rate is 2.7 million tonnes a year, or about 600,000 carats a year in diamond grade. 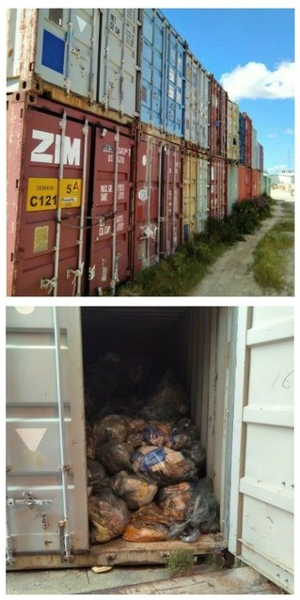 Much of the diamond mine waste that DBC would deposit into such landfill, is reusable and salvageable. Over half of the proposed landfill waste will be powerline infrastructure which has significant value, together with steel, pipe and wood products that can be re-used or recycled. “De Beers could and should be transporting that waste through the winter road it has maintained for the last many years, to markets and facilities south of us, where it can be treated and reused,” says Attawapiskat Chief David Nakogee. “We’re talking about 100,000 cubic metres of material that could be reused or recycled. De Beers unilaterally cancelled the contract for the winter road project because they said they don’t need it. Of course they don’t need it when they have the alternative of turning our lands into their garbage dump instead of building a winter road.”

“A 200,000 cubic metre demolition landfill could fit about four CN Towers. A 100,000 cubic metre landfill could serve a medium-sized Ontario municipality for 20 years or more. A landfill that big requires a Comprehensive Environmental Assessment,” says environmental consultant to Attawapiskat, Don Richardson. “But if Ontario agrees that De Beers can split the demolition landfilling into two pieces of about 100,000 cubic metres each, De Beers can side-step the time and costs involved in planning a big landfill project through a Comprehensive Environmental Assessment. If Ontario lets De Beers do this, I expect a lot of Ontario municipalities will be looking to see if they can follow the same landfill splitting approach, and things will get pretty interesting for people who live around future landfill projects in southern Ontario.”

This comes on the heels of DBC also seeking approval from Ontario to stop key monitoring of water quality at the mine, through exemptions in its permit to take water. And this new diamond mine garbage problem comes while DBC has stored much of its organic waste on the mine site in over 50 large shipping containers while it tries to get an incinerator functioning to burn this mine garbage.

Attawapiskat is firmly rejecting all of this, and letting the Ontario Government know. Whether Ontario will pay any attention remains to be seen.

It was just announced that a rare 102 carat diamond the size of a small egg was discovered at the Victor Mine and is set to be auctioned off by Sothebys possibly for about $30-million.

“De Beers has profited a lot from the Victor Diamond Mine and will profit even more,” says Chief Nakogee. “These expensive diamonds come from my Nation’s homeland, in our backyard, and yet we continue to live in horrendous conditions where we can’t even drink the water here from the taps. We keep watching the wealth of our Traditional Territory, from the waters and lands to the wildlife, get industrialized. We keep watching others walk off with the profits of that industrialization, leaving us to bear the burden and the waste. When De Beers has the money to transport, recycle and re-use materials, and to properly monitor the effects of the mine on the lakes and rivers, they must be required to do so. We will not tolerate excuses when so much is at stake.”

Attawapiskat urges those who care about this environment to research this matter and to contact the Ontario Government to register your concerns about this issue. •