Where are we going as a society? We once proudly invested in our schools, pools, libraries, daycare, healthcare, roads, electricity, water and sewers. Today we’re busy slashing social services and letting our infrastructure crumble. With new technologies in place, families are working longer hours and harder and our resources are demanded all over the world. Yet all we hear about is deficits and austerity measures. 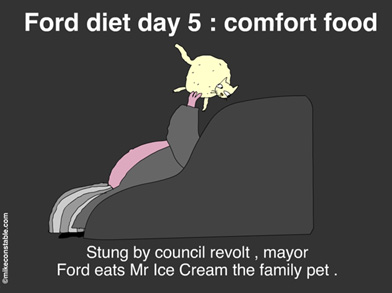 “Occupy” helped bring attention to the top 1 per cent. There is more wealth now than there has ever been. Today our per capita GDP is 50 per cent higher, even after adjusting for inflation, than it was at the start of the 1980s. Where has all the money gone? Over the last 30 years, structures have been put in place to transfer wealth to the wealthy. We’re told these structures are in the public interest. ‘Tax cuts will lead to more investment and jobs’ and ‘all boats will be lifted by the rising tide.’ Only the luxury liners are rising and everyone else is sinking in their wake.

While everyone else’s wages have stagnated over the last 30 years the top 1 per cent have seen their pay and wealth increase dramatically but didn’t like paying all those extra taxes. Governments have been all too happy to accommodate them. In 1980, the top federal tax rate was almost 50 per cent higher than it is today.

In terms of fiscal deficits, according to the latest figures the combined federal and provincial shortfalls are running at about $65-billion annually. To put this in perspective, since 1980 the top 1 per cent has increased its share of the national income from 8.1% to 13.3%. A shift of $67-billion. If taxes had kept their share at the 1980 level, there would be no deficit nationally.

We don’t have a debt crisis.
We have a distribution of wealth crisis.

Tax cuts have created this mess. Privatization and deregulation of our public services and assets is presented as a painless way to solve the debt crisis. Politicians promise ‘increased efficiencies’ and lower taxes. What really happens is that public wealth and profit making opportunities get transferred to the private few. The private sector has been drooling to get its hands on public assets for a long time. Since the crash of 2008 there has been a ‘flight to quality’ for investors and now is their big chance to get public assets at fire sale prices.

By private sector discipline and increased efficiencies are we referring to the likes of Enron, Worldcom, Nortel, Lehman Brothers, AIG, Fannie May and Freddie Mac and the greed of American finance that caused the world’s current financial crisis?

When Mike Harris brought in Hydro deregulation to end 95 years of non-profit power in Ontario he created many profit making opportunities for the 1 per cent. But, the big promise of deregulation was lower rates. Now the rate is an average of 10 cents a kilowatt hour during the day when people need power the most. That’s a 132 per cent higher rate, much higher than the rate of inflation. After the Ontario Electricity Coalition (OEC) stopped Mike Harris’s sale of Hydro One in court most people thought the issue had gone away. But deregulation, the Enron designed electricity market and ‘for profit’ power is still here. Hydro deregulation is one of the main causes for killing manufacturing in Ontario and has badly hurt small business as well as the public sector.

The sale of Highway 407 and the lease of the Bruce Nuclear plant both privatized the profits but kept the debt public. These privatizations only balanced the books for the next election. That stranded debt still appears on your Hydro bill.

Millionaire Mayor of Toronto, Rob Ford, has ‘created a crisis’ in Toronto with his tax cuts and now wants to sell 10 per cent of Toronto Hydro to solve the debt crisis. Selling 10 per cent of Hydro will only last until the next election. Selling 10 per cent of an asset that makes money every year in exchange for 10 per cent of all future profits (that help pay for city services) is not very bright. Freezing taxes when the inflation rate was 3 per cent cost the city about $183-million in 2011 and again in 2012; adding the cancelled vehicle registration tax of $64-million the total is $430-million. If taxes were raised at the rate of inflation, the city wouldn’t have to lay anybody off, raise user fees, cancel any programs or privatize city assets.

All tax cuts, privatization and deregulation do is transfer public wealth to the private few.

Austerity for most of us and transferring more wealth to the top 1 per cent won’t get us to a fair and just society that stewards the planet in a sustainable way. A good start would be returning to more progressive taxation and introducing government policies and oversight that serves the population, not the wealth of an elite few. •