Canadian Labour At The Crossroads?

A wage cut of fifty per cent. An elimination of pensions. Cuts to benefits. These demands have inevitably led to a major showdown at a locomotive factory in London, Ontario between the 700 unionized workers of Electro-Motive Diesel (EMD) and Caterpillar, a massive U.S.-based corporation. The workers, members of Canadian Auto Workers Local 27, responded to the employer’s demands with a positive strike vote of 97 per cent. The employer, Progress Rail, a subsidiary of Caterpillar, locked out the workers on New Year’s Day. 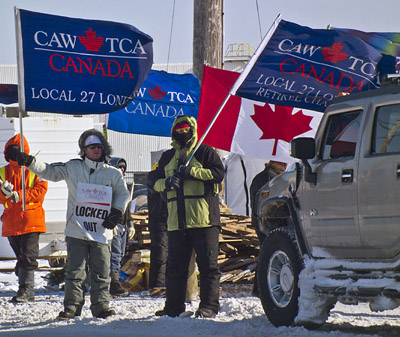 In addition to facing down a notorious anti-union employer who hammered the American United Auto Workers in the 1990s,[1] there are plenty of rumours about Caterpillar closing the London plant and moving operations to Muncie, Indiana. EMD workers in London make $36/hour while their counterparts in Muncie are paid only $12.50-14.50 (Cdn)[2]. Indiana is also on the cusp of becoming the first rust-belt state to introduce a “Right to Work” law, a notorious form of anti-union legislation made possible by the even more infamous Taft-Hartley law of 1947, the long-standing crown jewel of American anti-union legislation.[3]

The response of organized labour to the lockout has been swift. The Ontario Federation of Labour (OFL) is coordinating a mass rally in London on January 21 with buses coming in from numerous cities across the province and as far away as Sudbury and Ottawa. The OFL is anticipating at least ten thousand protesters.[4]

Mainstream media coverage has also been extensive and the shocking nature of Caterpillar’s demands have so far ensured that coverage has been neutral and even supportive of the workers. The story is being covered by all major Canadian dailies, prime-time news hours on CBC and CTV, and has received coverage in the New York Times, Wall Street Journal and now the European and Australian press.

Not surprisingly, the federal government has stayed silent. Since they won their first majority government in May, the Tories have gone to war with organized labour. In June, postal workers were locked out by Canada Post, the state-owned crown corporation. The Tories responded with back-to-work legislation which called for pay increases lower than the employer’s last offer.[5]

Federal Labour Minister Lisa Raitt went further, twice threatening to legislate Air Canada flight attendants back-to-work, even though Air Canada was privatized in 1988. From a party espousing government non-intervention in the economy, Raitt’s reasoning behind intervening in the private sector was that Air Canada was essential to the economy.[6] This absurdity was repeated in October when Raitt floated the idea of defining the “economy” as an “essential service,” thus providing some pseudo-legal justification for further interventions.[7]

The government’s hypocrisy goes further. In March 2008, on the very shop floor of EMD London, Prime Minister Harper announced a billion dollar tax break to industry in 2008, $5-million of which went to EMD London.[8] Two years later, EMD London was purchased by Caterpillar.

Despite its record high revenue and profits in 2011, stemming from sales of its machinery to a booming resource sector (tar sands, mining), Caterpillar is attempting to destroy a union.[9] In addition to their anti-union stance, the threat of roughly two thousand jobs being lost in London,[10] and their profiting off environmental disasters like the tar sands and mining operations around the world, Caterpillar supplies Israel the bulldozers it uses to carry out house demolitions in occupied Palestine.[11]

This leaves labour – and all the political allies of labour – at a crossroads in this high profile, high stakes clash between workers and state-blessed corporate power. The implications for other workers – such as Toronto municipal workers, the locked-out steelworkers of Alma, Quebec, the York Region Transit workers, and all other workers, union and non-union – couldn’t be greater. Since the Tory victory in May, employers, public and private, have received the message loud and clear: the federal government is siding with them in a sustained attempt to hold down wages and benefits, slash them where possible, and break the ability of workers to resist these moves by breaking their only means of defence: unions.

Is labour up to the challenge? The OFL has already moved the rally’s location from the picket lines outside the factory, to downtown London’s Victoria Park eight kilometres away. The move is explained by the OFL as ten thousand being too many for it to be “safe” on the picket line.[12] What nonsense is this? Fifteen thousand pickets peacefully shut down the Port of Oakland last November in an Occupy-initiated general strike.

Holding the rally in Victoria Park will ensure that is a symbolic display of opposition and nothing more. Only a few hundred of the ten thousand will likely take up Local 27’s invite to the picket lines after the rally. Thousands of protesters will be boarding buses after the downtown rally to head back home and won’t have time to make it to the picket lines.

If you’re having deja vu, you’re not alone. Last year, ten thousand people from across Ontario attended the Hamilton Day of Action against U.S. Steel held January 29, 2011.[13] On the steps of Hamilton City Hall, union leaders and labour politicians denounced the lockout and backed the steelworkers refusing to see their pensions gutted by U.S. Steel. A short march made it around a few cold and deserted downtown blocks before returning to City Hall. As one of the hundreds who lined up for union-sponsored buses back to their respective hometowns, I later realized that we had marched past the old Stelco building, U.S. Steel’s Hamilton office, without even stopping to do anything.

The days of action in Hamilton and London may boost the spirits of locked-out workers, but what will it accomplish beyond this? In the wake of Occupy as well as the Capitol Building occupation in Wisconsin last year against the stripping of public sector bargaining rights, the time seems ripe for bolder action. Bold action could galvanize thousands of Canadians angry at the Tories and the one per cent, could overturn the limited range of Canada’s political debates, and maybe just put employers and the Tories on the back foot for once.

“…the time seems ripe for bolder action. Bold action could galvanize thousands of Canadians angry at the Tories and the one per cent, could overturn the limited range of Canada’s political debates, and maybe just put employers and the Tories on the back foot for once.”

The battle at EMD might be lost, but it could still be a turning point for labour by showing a new determination to take more controversial but increasingly necessary actions to counter the “race to the bottom” overseen by an entrenched federal government keen on hammering workers and dismantling hard-won social programs.

Drawing on the Occupy movement, the Spanish Indignados, and the Republic Windows and Doors occupation in Chicago from late 2008, occupying EMD London should be on labour’s agenda. In this sense, moving ten thousand pickets away from the factory is a lost opportunity for initiating the occupation. If this sounds too radical, Egypt and Occupy have changed what’s possible – an occupation could be a galvanizing moment for Canadians and become a worldwide beacon of resistance. And the story of EMD London exposes so clearly the intertwined problems of corporate greed and tax breaks, the war against workers, failing democratic institutions, environmental destruction and imperialism. And what better union than the Canadian Auto Workers, founded on the plant occupations in Flint and Oshawa in 1936 and 1937, to carry this out?

Even if an occupation doesn’t happen but the demand is shouted loud enough – “Occupy EMD!” – it normalizes the idea among networks of workers and activists and lays the groundwork for occupations taking place in inevitable future labour disputes.

The decision to occupy will have to be taken by EMD London workers themselves. But solidarity actions can be carried out across Ontario and beyond. Battlefield Equipment Rentals (which is a Caterpillar dealer) with over 30 locations in Ontario, two in Manitoba and five in Newfoundland. The activist networks built up by the Occupy movement could link up even more with trade unionists to spread the resistance to Caterpillar far beyond London itself. This is what Americans did last August when dozens of Verizon Wireless stores across the country were picketed in solidarity with the communication workers strike against Verizon. The union, Communications Workers of America, even launched an “adopt-a-store” campaign for local activists to show their support, leading to many weekly pickets of Verizon Wireless stores.[14]

Where Battlefield Equipment Rentals can’t be found, pressure can be put on the 166 Tory MPs riding offices in every province, highlighting government complicity with the corporate tax breaks to EMD London. Ottawa labour activists already showed this could be done when they occupied John Baird’s riding office during the postal worker lockout.[15]

In short, the Canadian labour movement needs to reinvent itself and abandon the long-standing attitude toward conciliatory relations with employers, hopeless appeals for government intervention, and a general neglect of the wider, non-union working-class. The lockout in London makes this reinvention both necessary and possible. London could be the place where the labour movement – or at least a substantial minority of activists, union and non-union – recovers a tradition of militancy on behalf of the whole working-class and sees itself as a collective force for economic and political justice and transformation. •