There is good and obvious reason to celebrate the long history of the African National Congress (ANC): the organization’s marked dedication over one hundred years to the cause of the betterment of the lot of the oppressed African people in South Africa. It has also sustained an honourable commitment to a multi-racial, pan-ethnic outcome to the struggle against the unequivocally racist system that both segregation and apartheid came to represent for so long in South Africa. And, not least important, the ANC is now in power.

Not that the ANC was alone in this struggle. The ICU, the Unity movement, the PAC (Pan Africanist Congress) and AZAPO (Azanian People’s Organization) were, of course, significant heterodox players over many years. Then, in the 1970s and 80s, the Black Consciousness Movement, the range of unions that would soon become COSATU, and the township insurgency that first burst into flame in Soweto and then, spreading dramatically, helped fuel the United Democratic Front (UDF) and the Mass Democratic Movement (MDM) also had vital roles to play. Even more expansive in their import than any some-time ‘internal wing’ of the ANC such assertions have also been linked all along – but such militancy from below marks the present moment in South Africa as well – to a wide range of local outbursts and assertions as part of a genuine mass resistance in South Africa (one not always easily identified as ‘belonging’ to any one or another broader movement). 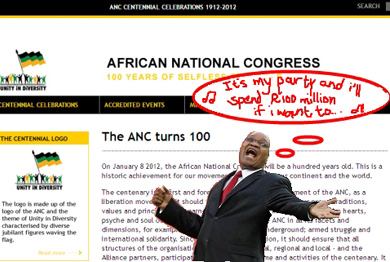 In short, the surge forward in South Africa was by no means monopolized by the ANC, despite the longevity of its existence, its persistence in exile, and its occasional quasi-military appearance within South Africa’s borders. Yet the ANC did manage to translate its popular salience (and that of Nelson Mandela), its international resonance (becoming much more credible in this respect with the virtual disappearance from the scene of its long-time Soviet-bloc allies!), its rather spottier presence on the ground inside South Africa, and its increasing and quite dramatic rapprochement with international capital into a winning hand in the on-going bargaining with the apartheid state. And it did emerge victorious in 1994. Moreover, the fact that it had by the 1990s abandoned any promise of offering a radical alternative to continued subordination to global capitalism (and to its leaders’ own aggrandizement as the new well-rewarded masters of state power) did not, at first, cost it heavily at the polls. It was the party of ‘liberation’ after all.

Indeed, as such, it began merely to absorb other centres of recent and significant public dissent. The South African Communist Party (SACP) was already well within the ANC’s tent of power of course, but soon COSATU felt compelled to yoke itself as junior partner to the political juggernaut that the ANC had become. As for the UDF, many within it undoubtedly did feel the positive pull of ANC legitimacy but the fact is that those who did not were soon sidelined and the UDF disappeared, leaving long-time ANC/SACP stalwart Rusty Bernstein to bemoan, shortly before his death, that:

“The [ANC’s] drive toward power has corrupted the political equation in various ways. In the late 1980s, when popular resistance revived again inside the country led by the UDF, it led the ANC to see the UDF as an undesirable factor in the struggle for power, and to fatally undermine it as a rival focus for mass mobilization. This has undermined the ANC’s adherence to the path of mass resistance as a way to liberation, and substituted instead a reliance on manipulation of the levers of administrative power. It has paved the way to a steady decline of a mass-membership ANC as an organizer of the people, and turned it into a career opening to public sector employment and the administrative ‘gravy train.’ It has reduced the tripartite ANC-COSATU-CP alliance from the centrifugal centre of national political mobilization to an electoral pact between parties who are constantly constrained to subordinate their constituents’ fundamental interests to the overriding purpose of holding on to administrative power. It has impoverished the soil in which ideas leaning toward socialist solutions once flourished and allowed the weed of ‘free market’ ideology to take hold.”

Renewed resistance – this time, increasingly, to the ANC in power – took a few years to jell, of course. But a distinct constituency, one that echoed the revolutionary sensibility of the past, has begun to articulate a radical grass-roots politics that begins to surge past the illusion of ANC ‘victory.’ After all, some increasingly sensed, liberation must be about more than racial and national assertion. It must, they reason, also be about transcending class, about gender equality, and about the expression of genuinely and effectively democratic voice. And about policies – in the spheres of employment strategies, redistribution, education, health, water and electricity supply, and of a more internally-focussed and need-driven industrial strategy – that exemplify some real attempt to overcome the great inequalities that no mere tinkering with such things as ‘basic income grants’ can paper over. Fortunately, as noted, politics in South Africa has long been about more than the ANC – and so it will be again, many feel. For it is in this prospect, rather than in some mere wading through of the several hundred years of ANC hegemony predicted by the ever zealous president, Jacob Zuma, that a fulfilling future for the vast majority of South Africans is most likely to be found!

Left Alternative to the ANC?

But just how likely is that any such genuinely viable left alternative will surface? There is, on the one hand, the fact that the ANC’s vaunted 60-70% of the overall national electoral support has in fact shrunk to rather lower than 40 per cent of the eligible voters (and, in local elections, much less than that) – given the rapidly falling number of those who these days actually choose to exercise their franchise. Meanwhile, on the other hand (as Peter Alexander has recently observed):

“Since 2004 South Africa has experienced a movement of local protests amounting to a rebellion of the poor. This has been widespread and intense, reaching insurrectionary proportions in some cases. On the surface, the protests have been about service delivery and against uncaring, self-serving and corrupt leaders of the municipalities. A key feature has been mass participation by a new generation of fighters, especially unemployed youth but also school students. Many issues that underpinned [initially] the ascendency of Jacob Zuma also fuel the present action, including a sense of injustice arising from the realities of persistent inequality…[Moreover,] while the inter-connections between the local protests (and between the local protests and militant action involving other elements of civil society) are limited, it is suggested that this is likely to change.”

Small wonder. For the chilling fact remains that while the economic gap between people defined in terms of racial categories (black as distinct from white) has narrowed statistically (as some blacks have become very rich indeed) the gap between rich and poor has actually widened. Needless to say, in South Africa such depressing facts are too readily apparent to cause surprise. The real question is: how long can it be before the anger these facts even now give rise to becomes ever more potent politically?

“…the ANC government has lost a great deal of its earlier focus on the fundamental transformation of the inherited social system.”

True, there will be many who see the prospect of a rebirth of principle – rebirth of the goal of justice and equality – as still being most likely to arise from within the ANC fold itself. Those of us who supported, for many long years through the global anti-apartheid movement, the ANC’s championing of its cause can bring themselves to abandon such hopes only with great reluctance. But take, as well, the case of veteran ANC/SACP hand Ben Turok who now feels driven to “the irresistible conclusion…that the ANC government has lost a great deal of its earlier focus on the fundamental transformation of the inherited social system.” And to the conclusion that “much depends on whether enough momentum can be built to overcome the caution that has marked the ANC government since 1994. This in turn depends on whether the determination to achieve an equitable society can be revived.” It would be another thing, of course, were an old ANC loyalist like Turok to agree with me that the ANC, despite its brave history of a hundred years, is ineluctably becoming yesterday’s movement.

Yet it has become increasingly difficult to think otherwise, and increasingly necessary to divine some new counter-hegemonic movement, to delineate its possibilities and its prospects – and to make these potent in practice. Briefly, in Zimbabwe, the MDC seemed to offer just such an alternative there. Only cruel repression by Robert Mugabe and his ZANU minions worked to deny the MDC its several rightful electoral victories there. How intransigent will the ANC be when it becomes apparent that, despite its long service in the cause of national liberation, its rationale for the retention of power has run its course?

Equally challenging: the fact that knitting together protest, however widely expressed, into a viable counter-hegemonic movement – counter both to the ANC and to its neoliberal, freely capitalist, agenda – is still a long way from realization in South Africa. Indeed, the best so experienced an observer as Thabo Mbeki’s brother, Moeletsi, seems able to offer South Africans is a “Tunisia Day” set to arrive, he writes, in 2020! Then the South African masses will “rise against the powers that be, as happened recently in Tunisia.” For, in Moeletsi’s words, “the ANC inherited a flawed, complex society it barely understood; its tinkerings with it are turning it into an explosive cocktail. The ANC leaders are like a group of children playing with a hand grenade. One day one of them will figure out how to pull out the pin and everyone will be killed.”

But what is actually needed is something else than this, something far more sustained and structured – something more self-consciously and effectively counter-hegemonic in concept and in purpose – than a ‘mere’ Tunisia Day can offer. South Africans will have to be more creative and more imaginative than that in consolidating the kind of new movement necessary to realize a more just and equitable South Africa, a South Africa in which, a hundred years from now, they can take further pride. The liberation struggle continues. •

A version of this essay will be appear in a forthcoming issue of Amandla! marking the 100th anniversary of the founding of the ANC in 1912.

John S. Saul is Professor Emeritus of Political Science at York University and is author of A Flawed Freedom: Rethinking Southern African Liberation. John is also author, with Patrick Bond, of a history entitled South Africa – The Present as History: From Mrs Ples to Mandela and Marikana published in April, 2014.