How Not To Fund Infrastructure

Recycling is supposed to be a good thing, so when the federal Liberals quietly announced that “asset recycling” would be part of their strategy for meeting their much-ballyhooed infrastructure promises, not many eyebrows were raised. They should have been. Asset recycling is an obscure code word for selling our public goods for private profit. It’s privatization by another name. 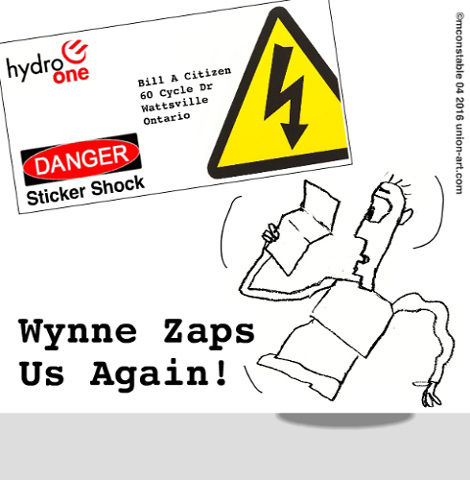 Don’t have the taxes to pay for new buses? It’s okay, you can sell your electricity utility to pay for them instead. In fact, this is precisely what the Ontario Liberal government is doing. Already 30 per cent of the profitable Hydro One have been sold and another 30 per cent will be sold before 2018. A public Hydro One could more directly fight climate change, lower energy costs for the poor or work with First Nations on whose lands generation often happens. A private Hydro becomes an instrument for profit first with other goals secondary.

What the Liberals have started in Ontario will soon be rolled out across Canada. Here are the problems with these schemes.

First, there is no crisis that says you have to sell a bridge to fund a hospital or the other way around. Or, better put, we have manufactured crises. Decades of slow but crippling austerity, tax cuts and restructuring have led us here. We cannot afford transit and hospitals by choice and it is in our power to reverse things. Deficit spending can be part of a reversal in the short term; asset recycling cannot.

Second, remember that we need more infrastructure spending because what we have is often crumbling and the economy faces gaps in demand. Investment in infrastructure not only creates useful things we depend on, it also creates demand for materials and jobs, which themselves create… you get the picture. Business isn’t investing, so there is a big role for public investment. Keepers of global order like the OECD and the IMF have recognized this. The IMF was applauded recently for walking back its support for austerity. Rightly so, but the same document reaffirmed support for privatization. Canada’s Liberal Party is really at the forefront of this policy shift by elites.

However, getting funds for investment by selling other assets into a system that has created massive asset price inflation – seen in stock markets at record highs, a lack of sub-million dollar homes in Vancouver or smashed art auction records – seems questionable at best. The response to the global financial crash of 2007-08 saved the world from depression but left fundamental inequalities in place.

Third, shares in newly-privatized public enterprises can become bargaining chips. Asset recycling has already created space for new and refined forms of triangulation, with worse to come. The latest batch of Hydro One shares in Ontario will be sold at a slight discount to First Nations for loaned funds. What seems like new funding is, however, a cynical one-off.

This is the Ontario government effectively saying, “we’ve underfunded your schools and clinics, poisoned your rivers and abandoned your communities, let’s make it right by helping us privatize Hydro.” Beyond slightly accelerating the sale of Hydro and coming at low political cost (the government gets a slightly smaller share of privatization income, rather than making explicit expenditure on First Nations), this scheme does nothing to address real grievances First Nations might have with Hydro. Seats on the Board of Directors or other regulatory bodies, deeper co-governance arrangements, priority hiring – none of this is on the table and neither is new, stable funding.

Pension Funds on the Prowl for ‘Investment Opportunities’

Finally, here’s a quote from an investment manager in a Maclean’s piece on asset recycling:

“‘But let’s remember that governments need to balance their books somehow… I don’t think they can raise taxes too much more. I don’t think any of us want that.’”

Typical right-wing talking points. The problem is that these typical right-wing talking points are coming from someone ostensibly representing union workers: this investment manager works for the Ontario Teachers’ Pension Plan. Canada is a world leader when it comes to workers’ own pensions being turned against them and younger generations. What were once simple, safe pension investments in government bonds are today predatory arrangements with pension boards acting more like hedge funds. Asset recycling only accelerates this process and binds regular people more tightly to a system that ultimately works against them. [Ed.: see “Pension Funds and Privatization,” LeftStreamed No. 194]

So, too few buses in your city? Sell an airport. First Nations have inadequate health facilities? Here’s a few Hydro shares. Need a pension? Buy a highway… and don’t forget to contract out the maintenance and toll staff to make sure you’re earning maximum returns. As a friend put it, “Trudeauism is able to sublimate both neoliberalism and social democracy into itself.” Just so, asset recycling is the wrong answer to each of the above good questions. •