The tension mounts as President Barack Obama and Speaker of the House John Boehner appear locked in a battle over how best to slash the federal deficit. The Treasury Department is scheduled to run out of borrowing authority on August 2 unless Congress agrees to raise the federal debt ceiling. No one is sure what will happen if there is no agreement but most analysts claim that the consequences will be severe. The U.S. government will not have enough money to pay bond holders what they are owed, leading to a downgrading of government debt and significantly higher future borrowing costs. The possibility of a flight from bonds could compound the problem, with a foreign-led sell off triggering a major dollar collapse.

Both President Obama and Speaker Boehner agree that Congress needs to see and approve a major deficit reduction plan before it will vote to raise the debt ceiling. They just cannot agree on a plan to present to Congress. According to media reports, President Obama has offered two different deficit reduction plans — one designed to achieve a $2 to 3-trillion reduction over ten years and the other a $4 to 5-trillion reduction. 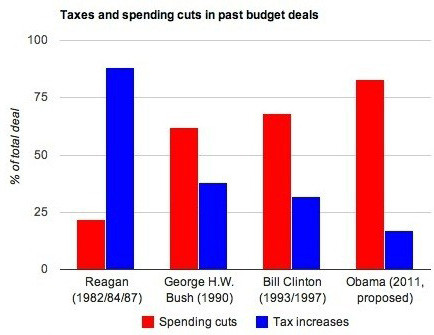 “[Under Reagan, Bush, and Clinton] taxes were at least a third of the total, and in Reagan’s case, his massive tax cuts were followed by deficit-reduction deals that actually relied on tax increases. . . .

“Bush also included taxes in his deal, and Clinton relied heavily on taxes in his first deficit-reduction bill, which passed without Republican votes. In 1997, when he was working with Republicans, he actually cut taxes slightly while passing spending cuts. But of course the economy was in much better shape then, and Clinton had already increased revenues substantially.

“The one-third rule doesn’t break down until you get to the deal Obama reportedly offered Republicans in the first round of debt-ceiling talks: $2-trillion in spending cuts for $400-billion in taxes, or an 83:17 split. And that, if anything, understates how good of a deal Republicans are getting. Tax revenues and rates are much, much lower than they were under Reagan, Bush or Clinton.”

The ratio is said to be more balanced in President Obama’s recently proposed $4 to 5-trillion deficit reduction plan: 75:25. However, since that plan apparently includes letting the Bush-era tax cuts for the rich expire in January 2013, Republicans have rejected it in favor of continued negotiations over the smaller deficit reduction plan.

Most of those who demand deficit reduction primarily through spending cuts have as their real goal a further weakening of the public sector and our social programs even though they claim that their only motivation is to do what is best for job creation. If we agree that drastic action must be taken to reduce the deficit (to be discussed more below), we face a basic choice: maintain taxes and cut government spending or maintain spending and raise taxes. Cutting public spending pulls money out of the economy, costing jobs. So does raising taxes. The question is whether we lose more jobs cutting spending or raising taxes.

More troubling, both sides have also embraced the conventional wisdom that our debt crisis is real and caused by out-of-control spending on social programs. Therefore, they argue, we have no choice but to take the hard step of cutting spending on those programs.

It is true that our yearly federal deficits have grown large. For example, as Figure 1 shows, the deficit for fiscal year 2009 (October 2008 through September 2009) was $1.4-trillion, equal to 10 per cent of GDP. However, Figure 1 also makes clear that our future deficits are best explained by three drivers: the economic crisis, the Bush-era tax cuts, and the wars in Afghanistan and Iraq. According to the Center on Budget and Policy Priorities, these three drivers “explain virtually the entire federal budget deficit over the next ten years.” Said differently, our debt problems have little to do with runaway social programs. Rather they are caused by specific (tax and foreign) policies that can be reversed and an economic crisis that can only be overcome through public spending.

While Figure 1 focuses on our projected budget deficits, Figure 2 offers an important complementary perspective on our projected national debt. As the Center on Budget and Policy Priorities explains:

“[Figure 2] shows that the Bush-era tax cuts and the Iraq and Afghanistan wars—including their associated interest costs—account for almost half of the projected public debt in 2019 if we continue current policies. Taken together, the economic downturn, the measures enacted to combat it, and the financial rescue legislation play a significant—but considerabley smaller—role in the projected debt increase over the next decade. Public debt due to all other factors than those specifically indentified in Figure 2 falls from over 30 per cent of GDP in 2001 to 20 per cent of GDP in 2019.”

Figure 2 also makes clear that the projected total debt burden, measured by the total debt held by the public as a percentage of GDP, remains below 100% over the relevant period (and beyond according to the Congressional Budget Office), the level taken by most economists to indicate a potentially serious debt problem. In other words we really don’t face an impending debt crisis.

“Gross federal debt is not a good indicator of the government’s future obligations . . . those securities represent internal transactions of the government and thus have no direct effect on credit markets.”

Unfortunately, our national debt ceiling is defined in terms of gross federal debt rather than the more appropriate total debt held by the public. At the same time, this understanding of the debt problem leads to a relatively simple solution to our current deficit battle. As Dean Baker describes:

“Representative Ron Paul has hit upon a remarkably creative way to deal with the impasse over the debt ceiling: have the Federal Reserve Board destroy the $1.6-trillion in government bonds it now holds. While at first blush this idea may seem crazy, on more careful thought it is actually a very reasonable way to deal with the crisis. Furthermore, it provides a way to have lasting savings to the budget.

“The basic story is that the Fed has bought roughly $1.6-trillion in government bonds through its various quantitative easing programs over the last two and a half years. This money is part of the $14.3-trillion debt that is subject to the debt ceiling. However, the Fed is an agency of the government. Its assets are in fact assets of the government. Each year, the Fed refunds the interest earned on its assets in excess of the money needed to cover its operating expenses. Last year the Fed refunded almost $80-billion to the Treasury. In this sense, the bonds held by the Fed are literally money that the government owes to itself.

“Unlike the debt held by Social Security, the debt held by the Fed is not tied to any specific obligations. The bonds held by the Fed are assets of the Fed. It has no obligations that it must use these assets to meet. There is no one who loses their retirement income if the Fed doesn’t have its bonds. In fact, there is no direct loss of income to anyone associated with the Fed’s destruction of its bonds. This means that if Congress told the Fed to burn the bonds, it would in effect just be destroying a liability that the government had to itself, but it would still reduce the debt subject to the debt ceiling by $1.6-trillion. This would buy the country considerable breathing room before the debt ceiling had to be raised again. President Obama and the Republican congressional leadership could have close to two years to talk about potential spending cuts or tax increases. Maybe they could even talk a little about jobs.”

In sum, we are witnessing a deficit battle between two sides, neither of which truly represents the interests of working people. No wonder, then, that the battle has done little to clarify the drivers of our rising national debt or encourage a productive national debate over appropriate policy responses. •