On February 1, Laurentian University’s President and Board got what they wanted from Ontario Chief Justice Geoffrey Morawetz: “This Court orders and declares that the Applicant [Laurentian] is insolvent and is a company to which the CCAA applies.”

The Companies’ Creditors Arrangement Act (CCAA) is federal corporate bankruptcy legislation dating from 1933. For the first time in Canadian history, the CCAA was applied to one of Canada’s public universities.

To the court, Laurentian characterized itself as a “publicly-funded, bilingual and tricultural postsecondary institution,” with about 8,200 undergraduate students and 1,098 graduate students in attendance. For now, Laurentian is said to be the largest of five universities in northern Ontario. Laurentian is based in Sudbury, the largest hardrock mining centre in Canada. It has taught many first-generation and working-class students, and has recognized responsibilities to the Franco-Ontarian community and Indigenous peoples in northern Ontario. 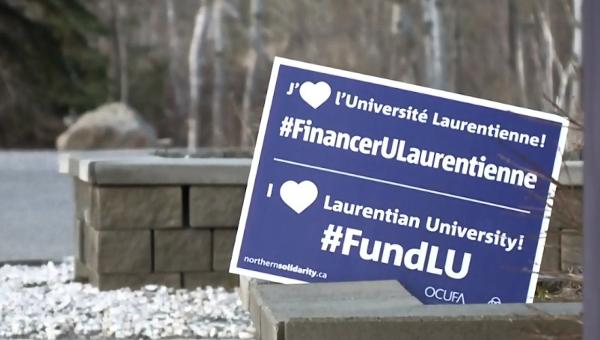 Rapid Attack in a Time of Pandemic

Laurentian’s CCAA insolvency claim was mobilized as a rapid attack – in the context of a pandemic – to slash academic programs and faculty complement. It enabled the Laurentian board to break important labour protections, especially faculty collective-agreement articles on redundancy and financial exigency.

Numerous reports surfaced that undermined Laurentian’s credibility. Alan Harrison of Queen’s University, appointed January 22nd as a special advisor to the Ontario Minister of Colleges and Universities, found that the Laurentian administration had been hiding deficits since 2014. Some media reports and angry public letters revealed that research grants and private donations had disappeared, as they had been intermingled with the regularly (mis)managed funds.

Within two months, Laurentian succeeded in slashing programs, full-time faculty, and research. By the official count, 38 of 101 English-language programs and 27 of 65 French-language programs were closed. In total, around 200 faculty members and staff, not including at the universities federated with Laurentian, were eliminated. The faculty association lost about one-third of its 360 full-time members; the staff union lost 42 of 268 positions; and the non-union staff, including administrative, professional, and senior management, lost 37 of 134 positions. Varsity men’s and women’s hockey and swim teams were cut. And, of course, arts programs and cultural-values programs were most severely hit.

The Université de Sudbury also had a historic relation to the Franco-Ontario community predating the foundation of Laurentian in 1960, housing the second oldest Indigenous studies program in Canada.

During this devastation, and despite protests and waves of community anger and incredulity, President Robert Haché and his communications staff put out releases that overlooked the lack of consultation and accountability with university faculty and students and the larger community of Sudbury and northern Ontario.

In spite of formulaic phrases about Laurentian’s commitments to its bilingual and tricultural mandate, the administration’s actions would eliminate the French department, francophone economics, francophone history, and francophone theatre, and dismantle Indigenous studies, including the program’s efforts at Indigenous language preservation.

While extolling Laurentian’s role in educating first-generation university students within a working-class community, the administration, at the same time, destroyed the labour studies program. While speaking of the need for a strong university in the region, Laurentian’s corporate strategy erased, in both English and in French, such basic university programs as environmental studies, geography, math, music, philosophy, physics, and political science.

The public line of the Laurentian administration has been typically Thatcherite: there was no alternative but bankruptcy or a scorched campus strategy. They continuously repeated that Laurentian had too many courses with low enrolment and that enrolment had declined in recent years.

Little has been said about why enrolments were low or declining, other than fleeting mentions of northern “demography” (declining population). But most students in northern Ontario come from away and, in any case, university participation rates in northern Ontario are far below those of southern Ontario, something that is well known and should be at the top of a serious regional mandate but is not.

Northern Ontario has structurally disadvantageous conditions due to its hinterland-colonial history: a population of about 780,000 (about 6% of Ontario) across a land area of 800,000 square kilometres (about 87% of Ontario); a multinational make-up, including Indigenous nations and francophone communities; lower employment rates and higher unemployment rates; weaker educational, media, and cultural institutions; lower educational attainment and university participation; and, not least, the ongoing ravages of colonialism.

The problem of low enrolment or excess capacity in some programs is not historically new for northern universities. However, in certain ways, today’s conditions are worse. There is more widespread deterioration in employment and social conditions in northern Ontario, but neoliberal Ontario government policies have also succeeded, to a greater degree, in privatizing the provision of public university education and research.

Ontario governments have reduced their public grants for university operating revenues from a level of about 80% in 1980 to around 50% in 2004, and to only 38% in 2017. Ontario provincial documents and some senior administrators speak openly not of public universities but rather, of “publicly assisted universities” and “publicly supported universities.”

Over these years, domestic and international tuition fees and miscellaneous fees paid by students jumped from 15% of operating funds in 1980 to 56% in 2017, becoming by far the largest source for operating funds.

Ontario now spends less per university student than any province in Canada and has among the highest tuition fees in Canada. At Laurentian University, full-time annual undergraduate arts and science tuition fees had increased to $6,473 in 2017-18, a nearly 9.4-fold increase in nominal terms and 2.6-fold increase in real terms since 1979-80.

Tuition fees in undergraduate professional programs, such as engineering and business, were “differentiated.” Graduate and post-undergraduate professional faculty fees were increased even further. Miscellaneous student user fees were also increased and new user fees created, such as fees for services in registrars’ offices, athletics facilities, and for materials in some programs.

The primary issue here is not about academic competition among universities, which has long existed. Rather, it’s corporatized, tuition-driven competition on a highly uneven playing field. Increased tuition dependence in a context of slower system growth has intensified competition among universities for students and increased administrative expenditures for advertising, recruiting, public relations, and alumni- and corporate-oriented fundraising campaigns.

The privatization push also became fertile ground for increased managerialism, which was framed as needed for cost control and market-narrowed educational objectives. At Laurentian, this resulted in increased stratification in salary structures and has shifted staffing away from teaching and research.

Results of These Factors

What have the results been for northern Ontario, especially the full-time undergraduate enrolment, which is most crucial to the Northern universities?

For Ontario as a whole, full-time undergraduate enrolment grew in every year from 2000 to 2018 except in 2007 (the end of the double-cohort boom of 2003-06) and remained higher than population growth. Part of this expansion was due to an increased number of international students.

For northern Ontario universities, by contrast, full-time undergraduate enrolment peaked in 2011 at nearly 18,000 and has since declined. As a share of the Ontario university system, the Northern universities reached a relative peak of 5.2% of full-time undergraduate enrolment from 2004 to 2006 (during the double-cohort period) but had declined to 4.2% by 2018.

For neoliberal administrations, especially in disadvantaged regions, university planning has become less about educational need or even regional development and more about “aligning” programs and faculty complement to student demand and corporate labour-market pressures, which are increasingly systemwide.

By this market logic, Laurentian will cease to be a university with a wide range of accessible programs serving northern Ontario and become a narrow polytech, heavily dependent on limited enrolment programs with more tuition-fee leverage and even higher outside enrolment.

The pattern is clear in Laurentian’s own data on full-time faculty members before and after “restructuring.” Laurentian’s faculty complement was slashed overall by 30%, but for arts it was 55%; compared to education 29%; science, engineering, architecture 27%; health 17%; and management 12%.

The present insolvency crisis is a historic turning point. The crisis is framed as confined internally to Laurentian, resolvable by one-time cuts and better management but separate from failed government policy. This framing does not honestly deal with regional enrolment issues and will disproportionately hit arts programs and francophone and Indigenous programs, although it will also affect some sciences. In the end, however, all programs will be affected; the neoliberal hawks will come after larger programs as long as the path to higher tuition fees and privatization is open.

The alternative path, to halt program and faculty cuts, would recognize two failures: local administration failure and provincial policy failure. This would require emergency funding to save programs and jobs as well as to reform the enrolment system to stabilize and broaden the process, especially full-time undergraduate enrolment.

First, there should be an immediate reduction and eventual elimination of tuition fees (without means-testing) for both provincial and international students, beginning with programs that have excess capacity at all northern universities. The universities should be compensated, per student, by the Ontario government.

Second, the province should regionally balance the allocation of system enrolment to stabilize northern university enrolment. Northern Ontario has about 4.2% (and declining) of Ontario’s full-time undergraduate enrolment. Even a one-percentage point reallocation in the system would have a major effect on stabilizing northern enrolment, including at Laurentian.

Third, there also exists a major federal responsibility in the current underfunding and privatization of postsecondary education in Ontario and northern Ontario. These include fulfilling treaty responsibilities for educational funding of Indigenous students; strengthened support for French-language programs, regional research and cultural program support; and a non-exploitive approach to international-student exchange that supports both universities and international students.

Northern Ontario and its peoples are a lot more than mining, and mining itself is in employment decline in Northern Ontario. In practice, the talk of making Laurentian a mining university is a code for abandonment, if not outright destruction, of arts programs. Some university administrators might think opportunistically that continuing to play to mining corporations will solve the current crisis. But such an approach carries little to no prospect for this working out well for Laurentian, while it does carry the prospect of destruction for the arts and crucial areas of science.

Faced with deteriorating university conditions, Ontario university administrations, faculty associations, and student organizations, from their varying perspectives, have been critical of the inadequacy of provincial funding and the consequences of protracted austerity.

Inadequate total public funding has done major harm to Ontario’s universities and the system is faced with further damage as the current Ontario government implements “performance-based funding.” However, a simple return to enrolment-based funding in a tuition-fee-driven system is not a solution to the deepening crisis, especially for northern Ontario and for arts education. Neither will it be enough to save Laurentian, nor another public university from becoming the next predictable debacle. •

This article first published on the The Monitor website, and will appear in the Summer 2021 issue of Our Schools/Our Selves.

David Leadbeater was an Associate Professor of Economics before being one of about 200 employees terminated by Laurentian University.