Subjects of the New Corporate University: The Sabotage of Laurentian University

At about 10:28 p.m. on Sunday May 3rd, the other shoe dropped. Insolvency Court Justice Geoffrey B. Morawetz gave Laurentian University’s president what he had wished for: a ruling in his favour and the signal that heralded the conclusion of phase one of the restructuring and transformation of Laurentian University.

Even though postsecondary education is a provincial jurisdiction, the legislation used to carry out this weaponized ‘restructuring’ is a federal law: the Companies’ Creditors Arrangement Act (CCAA). This “insolvency law” is being applied to a publicly-funded university, in the city of Sudbury, a four-hour drive north of Toronto.

Why should anybody outside of the city of Sudbury or Laurentian University care? 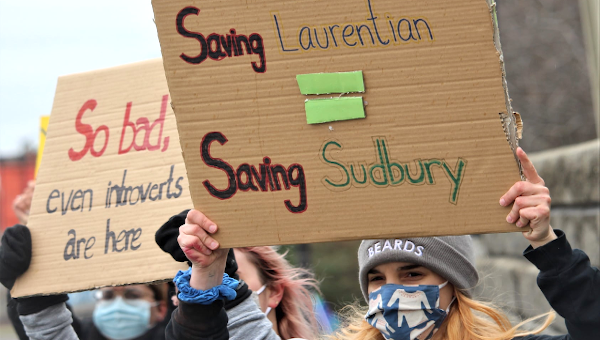 Because for the first time in Canada’s history, a public university has claimed it’s broke, filed for court protection from its creditors, and precipitated a ‘shock doctrine’ crisis, perhaps in order to violently rewrite and model the first corporate-style makeover of a Canadian university. With about 9,000 full- and part-time students, Laurentian is northern Ontario’s largest university, and has served indigenous, francophone, and arts communities alike, promising a bilingual and tricultural mandate. Today, that mandate sits in tatters.

On April 12th, Laurentian terminated 116 full-time, mostly tenured, faculty members out of a total of 345 – all unionized employees with active collective agreements. Those that remained would teach and work in a much-slimmed-down “Laurentian 2.0” with 69 fewer academic programs. Fully half of the university’s programs, developed over 61 years, were eliminated in a process lasting a mere 70 days.

While the faculty pension plan is safely in a secured fund, pensioners’ supplemental and health benefits were cut, and faculty wages were reduced by five percent and frozen for two years of a now-five year collective agreement. Grievance procedures were gutted, and new disciplinary procedures were implemented. Five unpaid furlough days per year were imposed through to 2024, professional allowances were cut for one year, workloads were increased, faculty research funds suspended, and limits on new course preparation removed (an effective increase in faculty workloads). While recall rights for terminated full-time faculty exist, they are largely on paper. This collective agreement has effectively opened the door to replace full-time faculty members with contract sessional faculty – paid a fraction of a full-time wage, effectively opening the door to greater exploitation of a precarious group of university workers. Additionally, about 43 unionized university staff and about two dozen administrators were also permanently fired. These decisions received the assent of the university’s Senate, and all collective agreements were ratified by faculty association and staff union members – albeit with a gun to their heads.

The CCAA court may give these proceedings an air of legitimacy, but don’t mistake what’s happening as anything other than a corporate-style takeover of a public university – an anti-democratic act by an employer who is utterly hostile to its workforce. 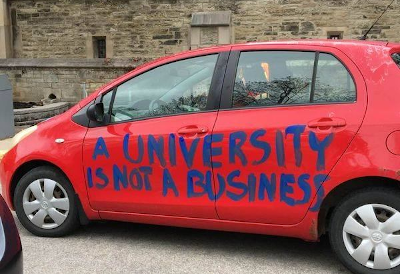 This form of court-imposed institutional violence is brought to us by a Depression-era piece of legislation originally aimed at forestalling the breakup of enterprises after declaring bankruptcy. It’s known as the CCAA and is Canada’s version of “Chapter 11” (Chapter 11 of the United States Bankruptcy Code permits reorganization under the bankruptcy laws of the United States ) as it allows a corporation (yes, Laurentian lawyers’ first win was recognition that the university fits the definition of a corporation and is subject to this law) the opportunity to hold off the bill collectors while owners get their house in order. In short, the CCAA gives employers wide latitude to do what they will in order to rationalize their operations and achieve solvency. But at what cost?

The Companies’ Creditors Arrangement Act is loosely written, as laws go, and so, the rulings of the Justice in charge and case law precedents both set the stage for the CCAA’s interpretation. In the absence of the law, past practice becomes the effective law. Insolvency lawyers extol the virtues of its creativity and the wide latitude given to judges – it’s the raw clay that allows itself to be molded like the ‘Golem’ of Yiddish horror stories. Just look at the opening sentence of the university’s lawyer, DJ Miller’s, contribution to The Americas Restructuring Review 2021:

“If necessity is the mother of invention, then insolvency is a perfect incubator within which creative solutions can emerge” (DJ Miller, 2020).

The publisher of this tome, Global Restructuring Review, describes the publication as “the world’s only daily news and analysis service on cross-border restructuring and insolvency.” We’re in the big leagues now. Canada’s public institutions, from hospitals to municipalities, have been noticed by the sleeping giant that is the ‘insolvency community’. That’s why we should care.

In the mid-1990s, this once-benign law was rediscovered and revived by largely unscrupulous, employer-friendly lawyers and employers. These robber barons use the CCAA to order mass terminations of employees, strike a knife in the heart of collective agreements, and plunder workers’ pension plans. It allows employers to deny their employees the severance pay and benefits they negotiated at the bargaining table in seemingly good faith. Then the new corporate entity can restructure ‘unprofitable units’, which are, in turn, broken away from the parent corporation and sold off.

Any newly-unemployed workers created as a result of this restructuring are simply tossed into the street with no severance, pension, or benefits. Luckily, LUFA-APPUL faculty members’ pensions were secured and out of the reach of the employer. However, Laurentian’s administration managed to spend members’ pension benefits because they were not held in a separate account from operational funds. As a result, the “Retiree Health Benefit Plan” and “Supplemental Retirement Plan” – were ‘mixed’ with operating funds and spent, along with students’ scholarship money, research funds, and anything else not nailed down.

Stelco, Algoma, Sears, and Nortel are all cautionary tales. They saw large numbers of employees terminated, some without severance, to be collected at a future date in pennies on the dollar. But these are only the tip of the iceberg.

How did we get here? On February 1st, Laurentian University’s administration won an insolvency court’s permission to restructure the university in order to close less “popular” programs, in the name of achieving financial solvency.

In their CCAA court filing, Laurentian’s President Robert Haché claimed that Laurentian had too many programs and faculty, and laid the blame for the university’s precarious financial situation on faculty salaries, rather than on decades of provincial underfunding, and longstanding management incompetence. Providing only 23 percent of university budgets, Ontario offers the lowest level of funding by far for their 24 universities, mired at the bottom of all provinces in the country. In order to achieve the national average, Ontario would have to boost university budgets by a whopping 35 percent.

In the mid-2000s, the university faced an enrollment problem, so the then-President and Board of Governor’s reaction was to embark on a typical set of solutions … for a hotel chain. Laurentian spent tens of millions constructing buildings that today lie half-empty, failing to address the decline in enrollment that afflicts all five northern Ontario universities. Laurentian University Faculty Association’s (LUFA-APPUL) court filings provide a far more convincing counter-narrative, and lay out evidence that Laurentian’s administrators borrowed money from private lenders to spend on capital costs – buildings – in order to attract students to its campus.

This is where we are: three of Canada’s ‘Big Six’ banks – RBC, TD-Canada Trust, and Bank of Montreal – have a vote on a restructured university plan, but faculty (no mention of the phrase ‘collegial governance’ has been hinted at) and students have no voice, no vote, and won’t be consulted in any genuine way.

Meanwhile, the provincial government is standing by silently, claiming that they’re prohibited from commenting, while the CCAA process steams forward without provincial ‘interference’. It’s an odd thing for the Minister of Colleges and Universities to say when one of Ontario’s 24 universities falls into debt due to the province’s decades-long history of underfunding. But Ontario universities are publicly-funded and regulated, and the government of Ontario is the funder and regulator. Yet, the province is happy to allow Laurentian University administration to cut the university down to size with little to no consultation.

When all is said and done, at the end of phase two on August 31st (a new extension only just granted by Justice Morawetz), Ontario will most likely swoop in and fund a much-diminished, much-cheaper-to-operate Laurentian University, with an emphasis on work-related programs aimed at the region’s hard-rock mines and other local employers. That’s the vision shared by the province and the university administration – a narrow, career-oriented institution with low-paid teachers, representing a major cost-savings. Needless to say, Ontario’s other 23 universities are watching carefully. 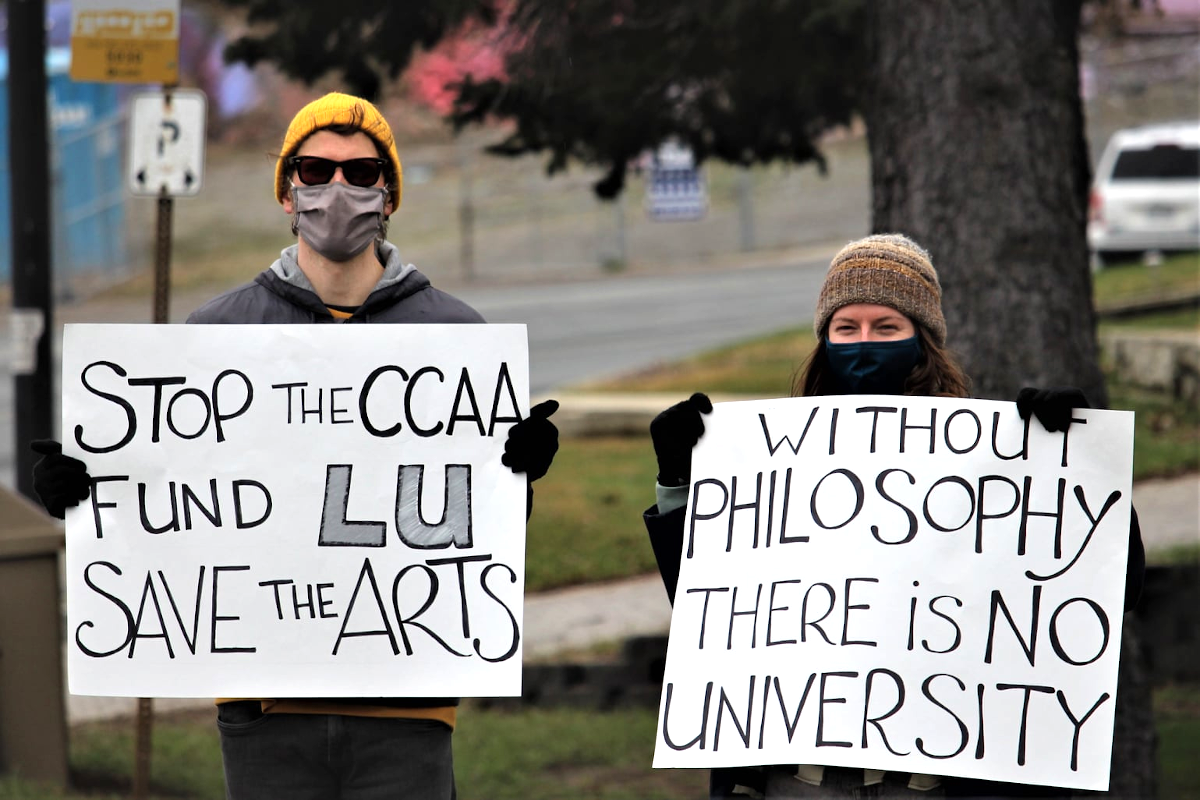 Why Fight for Higher Education?

Early industrial capitalists in the UK, US, and Canada once trained their workforce in basic skills, numeracy, literacy, etc., as well as job-specific and skilled trades training. They needed a workforce that could read a clock, a schematic, an account ledger, a pattern for tool-and-die making, and the assembly line number of the vehicle that slowly moved past them on the assembly line. That was then. A generation or so later, these industrialists pushed for an expanded, free public education system – and why not? From their standpoint, it meant that they could displace those training costs onto the back of the state, since tax dollars now supplanted the cost of their previous training efforts.

It’s 2021, and when we’re not at work, we’re staring at our cellphones. Industry no longer needs as many trained employees, and neoliberal governments have decided that they no longer need the burden of education on their books. We have a politically malnourished population that lacks the tools to assess their socio-economic and political circumstances. In a Freirean sense, teaching people critical thinking poses a problem to the status quo. It’s beginning here, but it won’t end here.

The assault on Laurentian University by a President who hails from Toronto is also a class issue – you don’t see this kind of attack taking place at the schools of Canada’s elite. Laurentian University is a working-class school, located in the hinterland of northern Ontario. Sudbury was established as a prototypical, single-industry, hard-rock mining town. Its catchment area is primarily the grandchildren of Italian, Finnish, and French-Canadian working-class miners and their offspring. 60% of students who attend Laurentian are “first generation” university students – a euphemism for the kids of the working-class. About 65% of graduates remain in the north – and there’s the rub: an attack on Laurentian is an attack on indigenous communities, Francophones, immigrants, and the working-class alike. It’s an attack on a feisty, vibrant arts community that’s sprung from the blackened rock.

This is why we fight, and this is why non-union and unionized workers, education workers, hospital and municipal workers, public health and group home workers, have to sit up, pandemic or not, and take up arms, because when they’re done with us, they’ll be gunning for your workplace or public services next.

As Globe and Mail columnist Konrad Yakabuski put it:

“Dozens of professors earning comfy upper-middle-class wages were shocked to learn that they did not have jobs for life after all. The precedent set by the sacking of 83 professors – another 27 teaching jobs were cut through early retirements and the elimination of vacant posts – has some wondering whether the ivory tower is really a safe space any more.”

The answer to Mr. Yakabuski’s question is no. The ivory tower is no safer than the factory floor, the retail sector, or the deepest nickel mine. Now that university workers recognize that they share the same vulnerabilities as other workers in the country, maybe it’s time for a united front and a general strike. •

Reuben Roth is an Associate Professor in the Workplace and Labour Studies Program at Laurentian University – until midnight on May 15th. He is one of the 110 faculty members who have lost their jobs as a result of program and faculty terminations.