Into the Light of Hope: Iranian Workers Strike

It is now just over a month since Iranian oil contract workers began their strike. This action, called by the Council for Organizing Protests by Oil Contract Workers (COPOCW), is the most extensive industrial action ever conducted by oil workers in Iran.

The 1400 Campaign is also participating in the organization of the strike – after the number of activists, academics, athletes, authors, etc, who signed its founding statement – under the slogan “No to the Islamic Republic.” But how did it start? The contract workers are employed in various roles on a temporary basis, the length of their contract depending on the type of project. When a particular job is completed, the contractor may not need them any more and so they become jobless. But most know many other such contract workers from working in many projects in various regions in the south of Iran. So after their contract is terminated they try to find a job in other projects through their contacts on social networks or family relationships.

These networks served as the starting point for coordinating the current industrial actions in the absence of trade unions, as well as other official or semi-official workers’ organizations, which are banned in the Islamic Republic. 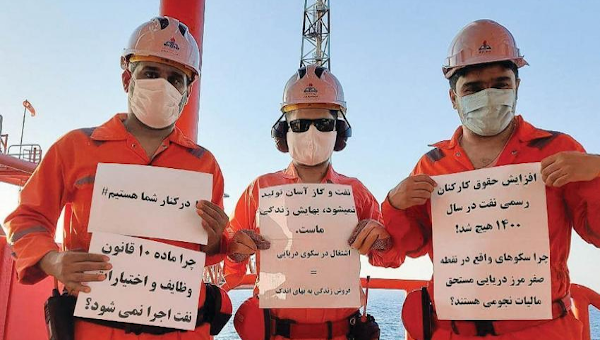 The strike has now spread to at least 117 oil and gas installations, refineries and petrochemical plants in 17 provinces, with between 60,000 and 100,000 workers reportedly staying at home or in their dormitories.

COPOCW has so far issued nine statements, the seventh of which contained a set of minimum demands. These expanded upon some of those listed above and included further specific ones, such as the provision of suitable food and medical facilities in workplaces, as well as free health insurance for all workers. But it stressed that the main demand was for an end to all contract employment and the abolition of those ‘special economic zones’, where employers can impose their own rules.

Some companies have attempted to undermine the action by promising concessions – including a substantial increase or even doubling of their wages, eight days’ leave for every 22 worked – hoping to force the rest to follow suit. Some workers have indeed returned to work, but very few.

One of the latest developments has been the organization of local meetings of strikers, where views are exchanged on the need to uphold their demands, defend the strike’s aims and send solidarity messages to other strike centres.

To date the government has not attempted to suppress the strikers by force, but is trying to break the unity of the workers by calling on them to return to work with the promise that there will be negotiations if they end the strike. The government has also been trying to undermine it from within via so-called ‘trade unions’, such as the Islamic ‘workers’ councils’, which are in reality collaborators of the state’s security agencies.

There are two main branches of work in the oil industry: the operational branch, consisting of technicians and particular skilled workers; and the management and staffing branch, consisting of those employed at project headquarters, including supervisors, coordinators, etc. Last year there was a smaller strike, which took place only in the operational section, with up to two thousand workers involved, but, despite its limited scope, workers in some projects managed to win wage increases of 50%-70%.

However, there are three reasons that have made this latest strike so strong. First of all, while it began amongst operational workers, unprecedentedly those employed in management and staffing have, to the surprise of the contractors, joined the action this time, meaning that various projects have completely ground to a halt. This previously unheard of unity between both sections has created a powerful dynamic for expanding the strike.

The second reason is the inability of the contractors to quickly hire a new workforce, because in both sections the majority are professional and experienced. The last reason is the rebellious and defiant psychology of the majority of workers who mainly belong to a younger, insubordinate generation which is more willing to challenge the regime. This is the same young generation which participated so widely in the uprisings of December 2017-January 2018 and November-December 2019.

In general, neoliberal reconstitution has led to the transformation of the working class of Iran from a proletariat to a precariat to a catastrophic degree. After the 1979 revolution only about eight percent of the workforce were contract workers without official employment under labour law. But after the 1980-88 Iran-Iraq war, that neoliberal reconstitution began and has since expanded dramatically under every government without exception, meaning that up to 95% of the workforce are employed on short-term contracts.

Previously, oil workers enjoyed relatively secure and stable jobs with a good salary and other complementary benefits. But Mohammad Khatami, after wining the presidential election in 1997, began the outsourcing of the oil industry workforce under his petroleum minister, Bijan Namdar Zangeneh. Before Zangeneh’s appointment all workers in the oil industry were officially employed. In 1997, the downsizing of the full time employment was promulgated under what is called ‘Code 23’.

This law was modelled on the sort of measures put in place under the government of Margaret Thatcher in Britain. According to such thinking, the duty of the government is to govern and regulate, not to own and run enterprises and businesses. As a result, all service jobs were outsourced to the private sector. Zangeneh stopped the hiring of new staff to replace retirees and at the same time engaged contract companies, whose role was to develop and expand the oil industry in all its various sectors.

The important thing to note here is that below the main contractors implementing the various projects there are at least five levels of subcontractors, who make huge amounts of money without any direct operational engagement. Today less than a third of employees (28%) have official and secure jobs. This huge ‘precarisation’ of the workforce in the wealthiest sector of the Iranian economy is the result of about a quarter of a century of neoliberal privatization and the corresponding reconstitution of the workforce.

The unique importance of this strike does not only relate to the fact that it is the most extensive industrial action in the whole lifetime of the Islamic Republic. It marks a huge turning point, in that its demands have set a new agenda – from the abolition of contract work and its replacement by secure jobs, through support for freedom of assembly and the right to protest, to the call for comprehensive social security cover. The COPOCW platform summarises the most urgent demands of the immense majority of Iranian people.

But the question is, why now? Why after more than 30 years has there been such a huge nationwide upsurge by the working class against neoliberalism? The answer lies in the earthquake that has shaken the whole political landscape to its core over the last few years. Multiple crises are plaguing the Islamic Republic, calling into question its legitimacy and threatening ideological, socio-economic disintegration, following its utter failure to tackle key questions, not least its handling of the coronavirus pandemic. To name just a few recent events:

Working class nationwide strike action has opened a window of light and hope in the long, dark night of the ayatollahs’ rule. But, despite its huge significance, the oil contract workers’ strike is only the first step in a long and difficult process of class struggle for freedom, democracy and socialism, which first and foremost requires the urgent resurgence of a Marxist revolutionary left to lead the struggle for the emancipation of the working class. •

This article is based on Ruben Markarian’s July 18 Online Communist Forum talk and published on the Weekly Worker (UK) website.