The critical analysis of commodification begins from the turning of every human need into a priced good sold in a capitalist market, notably the sale of certain goods such as kidneys or the dysfunctionality of certain markets such as healthcare. Commodification has profoundly negative effects including, for example, the exclusion of those who cannot pay, the marginalization of those whose collective purchasing power is not large enough, and the focus on highly profitable forms of production at the cost of more socially beneficial and ecologically sustainable forms of provision. These theses are the core of the argument of my new book The Critique of Commodification: Contours of a Post-Capitalist Society (2021). 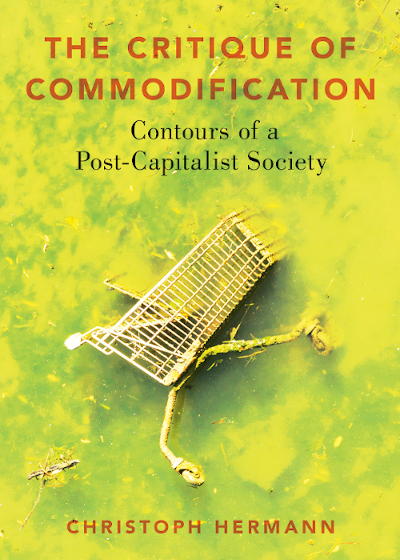 As a result of commodification and the primacy of profits over needs, people are obese while others go hungry. Healthy people in rich countries are bombarded with pharmaceuticals, which in some cases cause drug addiction, while millions of sick people in poor countries lack adequate drugs and treatments. Many are homeless, while at the same time luxury condominium apartments go vacant. Private partners in so-called public-private partnerships make record profits, while public hospitals have to cut beds and staff numbers, resulting in unnecessary deaths. Colleges spend more money for advertising and admissions than they do on teaching.

Commodification, furthermore, has fueled the industrialization of agriculture with disastrous effects for the environment, including, for example, marine dead zones that are as big as the state of New Jersey. At the same time, commodification blocks the transition to more sustainable forms of production and consumption, such as public transportation. Last but not least, commodification undermines solidarity and fuels inequality as access to goods and services is solely decided by purchasing power.

This book follows Marx’s understanding of commodification as subjugation of use-value to exchange-value but makes a number of important specifications: First it takes market value rather than exchange value as denominator of use value. Whereas exchange value depends on the amount of (abstract) labour expended for the production of the respective good or service, market value reflects supply and demand and as such is open to manipulation and speculation – which play an important role in commodification processes.

Going beyond the non-Marxist critique, the book identifies twelve general tendencies associated with commodification that have problematic consequences culminating in the drive for more commodification. For example, the commodification of agriculture has led to a shift from poly- to monoculture cultivation. However, monoculture farming comes with declining soil fertility and increasing susceptibility to infestation. Less fertility and more infestation create the need for artificial fertilizers, pesticides, and more recently genetically modified crops. These commodities are provided by highly profitable chemical and biotech companies. Monocultures, in turn, provide the input for an increasingly commodified food industry that no longer uses crops as a basis of food, but instead dissects them into their chemical components and then uses some of these components to create increasingly artificial products.

Corn, for example, is turned into cornstarch, which is subsequently used for a large variety of food products. In fact, it is hard to find processed food in an American supermarket that does not contain cornstarch.

The processing of food, in turn, creates even more incentives for monoculture cultivation. Among the consequences are increasingly obese children and depleted rivers, lakes, and coastal zones. Yet far from being the result of market failure or amoral behavior (as argued by moral and pragmatic critics of commodification), industrialized agriculture and processed food are the logical outcome of commodification and the primacy of profits over needs. There may be a demand for organic crops and artisanal food, but with traditional production methods, producers can make only a fraction of the profits of modern agri-food businesses.

The book also discusses alternatives to commodification. It argues that an alternative must shift the goal of production/provision from profits to needs, or from maximizing market value to maximizing use value. In order to do so, it must be recognized that the goods and services that we consume not only have an individual value, but also have social and ecological value.

In contrast to exchange and market value, the nature of use value is precisely that it cannot be measured. The answer proposed in this book is democratic decision-making. People can democratically decide which goods and services, or ways of satisfying needs, are preferable. However, in order to make sure that decisions are not made at the cost of those who are not part of the decision-making process, or are part of a minority, use-value maximization must include a commitment to solidarity.

The same holds for the environment: insofar as decisions impact the environment, they also impact future generations that will live on this planet. And because future generations do not have a voice, use-value maximization must operate in the boundaries of ecological sustainability. The combination of democratization, solidarity, and sustainability would result in what the book calls a use-value society. •