An Economic Recovery for Whom?

In the first week of July, the Ontario government announced the COVID-19 Economic Recovery Act (Bill 197). The sweeping omnibus bill changes twenty pieces of existing legislation and introduces several new acts. There has been little discussion in the mainstream media regarding the content of the bill, outside of the talking points provided by the Minister of Municipal Affairs, Steve Clark, and Education Minister Stephen Lecce. According to Clark, the Recovery Act would speed up the process for environmental assessments, address unemployment, create new consumer protections, and attract investors to the province. Lecce has declared that the omnibus contains measures to end school suspension prior to the fourth grade. 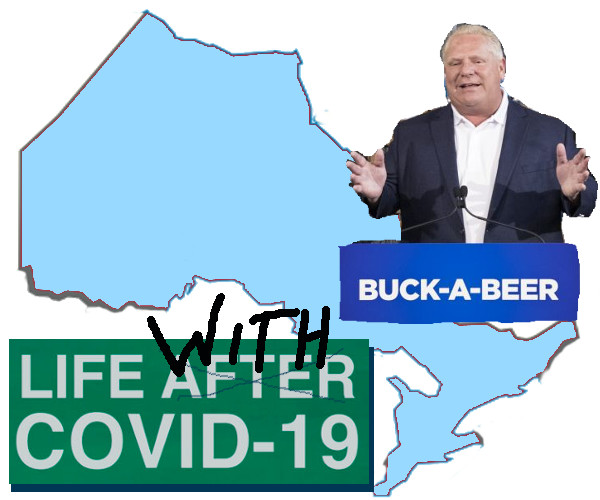 Any criticism of the bill that has appeared in the media, insofar as there has been any published criticism at all, has centered around the inclusion of measures which have little to do with COVID-19 or the economy. Such unrelated measures include changes to the Education Act, modifying the appointment process for provincial justices of the peace, and an array of other bureaucratic alterations. What has not yet been significantly interrogated is what impact the relevant measures to economic recovery will have. Who is being saved through this economic recovery plan? In a neoliberal economy, there is no such thing as mutually beneficial legislation for labour and capital, and of these antagonistic classes, it is capital that, almost without fail, is the beneficiary of state economic planning. This is the case with the COVID-19 Economic Recovery Act. The measures by which the Ford government intends to save the economy signals the end of pandemic politics and elucidates the establishment’s forthcoming post-Covid political project. The emergency fiscal and monetary policy appears to be over, and the omnibus bill warns of a swift return to the neoliberal orthodoxies of flexibilization, deregulation, and codification of the power of investor capital.

Back to the Neoliberal Project

The provincial government’s renewed commitment to the neoliberal project is, of course, unsurprising. All three of the major provincial parties have been fully invested in the neoliberal policy consensus since the 1990s, transforming Ontario from the former Keynesian heartland of Canada to the epicenter of pro-market governance (Albo 2019, 5). Doug Ford’s specific adherence to the market enabling tenets of neoliberalism is also well understood. Ford came to power campaigning on the mixed messages of ‘anti-elite’ right-wing populism, dogmatically neoliberal fiscal policies, and, oxymoronically, promises to increase public spending with no cuts to public services (Albo 2019, 30). These contradictions were resolved by the 2019 budget, which proved that Ford’s populist message had little impact on his neoliberal project, and that the promises of increased spending on transit, housing, and childcare were not to be believed. Ford almost immediately imposed a public spending and hiring freeze, cut the carbon trading system, and halted the planned minimum wage increase, while the budget entrenched the administration’s commitment to the neoliberals’ ideals of austerity, low taxes, labour discipline, and market expansion.

So, while the neoliberal reforms woven throughout the omnibus bill are not surprising, they are significant at this moment in history. The global pandemic has exacerbated the inherent violence and legitimation crisis of neoliberalism and plainly exposed underlying systemic conflicts along the lines of class and race. This defining public health crisis of our time has reinforced and accelerated the need to confront the neoliberal project. The ruling class’s sustained commitment to the project at this historical juncture must be met with the highest levels of scrutiny and with vehement opposition.

What does this omnibus bill contain? There are several minor COVID-19 related safety measures imposed on an array of ministries and departments. Changes to the City of Toronto Act and the Municipal Act, for instance, will allows for electronic participation in City Council and committee meetings and will permit the practice of proxy voting. Furthermore, changes are made across several departments to allow for electronic rather than paper pathways.

These minor nods to safety aside, the true nature of the bill is in its neoliberal regulatory agenda. The most salient part of the bill to this effect is the new piece of business legislation it introduces, the Modernizing Ontario for People and Businesses Act (MOPBA). Repealing and replacing the Reducing Regulatory Costs for Business Act, 2017, and the Burden Reduction Reporting Act, 2014, the primary intention of MOPBA is to ease the ‘regulatory burden’ of corporations doing business in Ontario. It codifies into legislation neoliberal principles of regulatory reduction, which the government has been operating under informally up until this point. Furthermore, the act broadens the reach of existing burden reduction requirements, extending them to cover legislation, regulations, policies, and forms (Office of the Premier 2020). It is a perfect example of the contradictory nature of neoliberalism as a deregulatory project, as regulations are not being repealed, but rather, corporate profits are being protected through the imposition of new regulations.

The role of MOPBA in protecting businesses from the auspices of state regulation should come as little surprise. The idea of “modernizing” markets has become a grim euphemism for pro-corporate regulatory reforms since the neoliberal turn. One might consider the Commodity Futures Modernization Act, enacted in 2000 by President Clinton, which legally exempted the burgeoning derivatives market from regulatory oversight, contributing greatly to the 2008-9 financial collapse. For a more recent and closer-to-home example, there is the Ontario Capital Markets Modernization Taskforce, formed in the Fall of 2019. The taskforce, composed of Bay Street executives and lawyers, was given a mandate by the provincial government to identify and propose methods of decreasing the regulatory burden on capital investors.

Regulatory burdens for corporations are further eroded by the omnibus bill through its significant overhaul of the Environmental Assessment Act (EAA), making it even more clear that the primary effect of this act is insulating businesses from public oversight. The most significant change made to the act is the creation of a “streamlined” assessment process for new projects. The degree to which the environmental assessment process will be altered by this streamlining is yet unclear, but statements made by government officials suggest that this new process will be significantly less scrupulous than the previous system. In their review of the proposed streamlining process, the Canadian Environmental Law Association has concluded that it will likely be implemented to eliminate existing requirements for Class environmental assessments, and undermines the public-interest purpose of the existing EAA (Lindgren 2020).

The goal of this amendment is to accelerate new development projects by reducing the requirements for environmental assessments. While this may encourage new building initiatives in the province, it comes with significant cost to environmental sustainability, as the true environmental impact of new projects may not be fully understood or considered. Furthermore, no clear criteria exist for determining which new projects qualify for the new streamlined assessment, but the bill does clarify that the Environment Minister can make such determinations. This leaves open the possibility that the less rigorous streamlined process will be applied far more broadly than the alternate comprehensive assessment option.

In addition to the pro-business measures established by the omnibus bill, last week the Ford government announced the creation of Invest Ontario, a new agency tasked with attracting foreign investment to the province. This appears to be the latest of a series of semi-autonomous provincial agencies, with broad-neoliberal mandates, similar to the aforementioned Capital Market Modernization Taskforce. The agency will be mandated to make Ontario “more competitive while sending a strong signal to investors that the province is open for business” (Office of the Premier 2020). Through this mandate, the provincial government is committing to a renewed race to the bottom. Previous attempts, in Ontario and elsewhere, to foster a competitive investment climate have involved reducing corporate taxes, eliminating protective measures for workers and the environment, and legislatively protecting foreign capital from any risk of expropriation or limitation to its mobility.

There is currently little information available about this proposed agency outside of its mandate; however, it is not difficult to imagine the measures that will be recommended to make Ontario a “one-stop shop” for investors (Invest Ontario 2020). The specific agenda of the agency will be highly dependent on the, yet unknown, composition of its board of directors. Past indicators suggest that the board will be full of Bay Street executives and the like. State actions that heighten the power and security of international capital necessarily have the inverse impact on the working class. Government funding will likely be depleted by providing corporate tax breaks which in turn, may lead to cuts in essential public goods. Anti-union legislation is also a common instrument employed by the state to attract international corporations, as is the weakening of employment and labour securities to limit regulatory restrictions on prospective new employers.

Neoliberal Ontario in a Post-Pandemic World

Not all economic recoveries are created equal. It is important to question who exactly the beneficiaries of a recovery plan will be and who will bear the associated burdens. Will it be the workers, the unemployed, and the precariously employed who are rescued? Or will the economic recovery plan solidify the power of capital and be paid for by the working class? The COVID-19 Economic Recovery Act provides a clear answer: the province intends to save employers, developers, and investors, using workers and the environment as fodder.

It is, of course, no surprise that the “Make Ontario Open for Business” government has again implemented a range of neoliberal regulatory reforms. While not surprising, it is significant at this historical juncture. The COVID-19 Economic Recovery Act is a harbinger of the post-pandemic political landscape. It affirms the role of the state, at least in Ontario, within the post-pandemic world as being the handmaiden of capital. Elements of the omnibus, like the introduction of MOPBA and the changes to the EAA, further demonstrate that the role of the neoliberal state is not necessarily one of deregulation, but rather it is tasked with the imposition of new regulations that insulate corporate capital from democratic challenges to accumulation.

The pandemic has yielded immense suffering and exacerbated the systemic violence of neoliberalism, and the province appears unwilling to help the working people of Ontario through the COVID-19 Economic Recovery Act or any other means. The public health crisis is far from over, but the provincial government is already signalling its sustained commitment to the neoliberal political orthodoxy that will define their post-pandemic response. As the economic recovery unfolds, the guiding logic behind the omnibus bill suggests that Ontario is likely to enact further neoliberal policy reforms, promoting workforce flexibility, limiting regulatory oversight, and generally promoting the privileged position of corporate capital. The left has been contesting the provincial government along these lines for decades, and opposition of this nature from unions, the organized anti-austerity front, and community solidarity groups remains vital. •

Bruce Kecskes is a Toronto-based writer and researcher concerned with issues pertaining to labour and political economy. He is a co-host of The Scarlet Standard podcast.