Another Round of Punishing Austerity in Ontario

The eminent conservative scholar of public budgeting Aaron Wildavsky characterized annual budgets as a record of “victories, defeats, bargains, and compromises.” The province of Ontario’s 2019 Budget, the first of the new Conservative government of Doug Ford, does indeed tell us something of this – additional fiscal supports for business, erosion of social expenditures in general, and for the most vulnerable in particular, large expenditures on public programs needed now spread far into the future, and generous symbolic gestures for this and that political constituency. Few surprises here: after all, Ontario is long-standing as Canada’s pre-eminent fiscally conservative jurisdiction with an unbroken legacy of clientelist politics greased by the public purse of the provincial state.

But budgetary policies also reveal deeper structural features such as the regional setting of the world market, the administrative form and policy regime of the state, and social struggles over justice and democracy. Such a shift in focus immediately registers a line of continuity extending back from the Ford government to the 1995-2003 Common Sense Revolution of the Conservative government of Mike Harris and Ernie Eves. Their market-expanding and labour-disciplining agenda established Ontario as a low-tax, low-cost regional production zone of North America dominated by an increasingly powerful financial class and a state committed to extensive growth at whatever the costs to Ontario’s ecology, First Nations, and workers. Neoliberalism, with its core tenets of a constitutionally constrained and coercive state buttressing of a ‘free market’, guided budgetary policy and all else. Despite the shift to a more ‘inclusionary’ political discourse, the Liberal governments of Dalton McGuinty and Kathleen Wynne, from 2003-18, never departed from this fiscal legacy and consolidated, for the most part, a variation of the same policy regime and development strategy.

There is no single neoliberal budgetary framework that has guided every single state, other than an underlying faith in ‘expansionary austerity’ – fiscal restraint to encourage business investment. After the ‘shock therapy’ of the initial Harris budgets in the mid-90s, Ontario fiscal policy has been focused on budgetary balance and total debt reduction. Ontario budgetary practice has been to keep nominal growth in spending below the combined rate of growth in inflation and output to steadily reduce the size of government as a portion of the provincial economy. As a result, Ontario sits last among the provinces in per capita government expenditures and more than $2000 below the average for the rest of Canada. Since 2010, program spending in Ontario has been growing at half the rate it has been in the rest of Canada. The Ford Budget aggressively amplifies this austerity logic (and makes absurd the austerity-lite verdict of the mainstream media and business economists).

First, since Harris, budgetary strategy has deliberately undermined the fiscal capacity to fund program spending adequately. Ontario now trails other provinces with lower personal and corporate tax rates and the lowest per capita revenues. Still, potential revenues are cut in the order of $3.3-billion from scrapping carbon pricing, reducing the average marginal effective tax rate on business from 16% to 12.6% (well below the U.S. average of 18.7%) through accelerated capital cost allowances, and cutting the small business deduction surtax from 11.5% to 3.5% (with a further reduction in the small business tax to come as well as a substantial cut to the middle income tax rate remains for the future). While Budget 2019 forecasts public expenditure in the aggregate to grow, the Tory plan is to further ratchet down the existing trend rate of growth of program spending, beginning with the levelling out of nominal spending as a whole for the current budget year. Indeed, considering inflation and a growing population, this entails a radical cut to per capita program spending (and a spending cut in real terms if inflation runs above 1.5%, directly recalling the Harris period, as a TD Bank budget commentary approvingly notes).

As a consequence, the Ontario Public Service has already been reduced by 3.5% through voluntary attrition alone, with further employee cuts coming across the public sector (with teachers and support staff in the education sector already receiving layoff notices). As the restraint to revenue growth and spending cuts take hold, Ontario’s net debt to the provincial GDP ratio will steadily decline from a current 40.2% to 38.6% over the term of the government (and after accounting changes the Tories used to boost up net debt).

The post-budget Spring Economic and Budget Outlook of the Financial Accountability Office of Ontario tersely notes that “the government’s plan for balancing the budget relies on restraining the growth in program spending to historic lows.” The fiscal consequences of this punishing austerity for social provisioning in Ontario are shocking. As the FAO projects on the Ford government fiscal strategy: “Specifically, the government plans to hold program spending growth to just 1.0 per cent on average over the next five years – which would be the slowest pace of spending growth since the mid-1990s. As a result of this restraint, provincial spending on public services would be reduced by $1,100 per person (or by more than 10 per cent) over the next five years.” 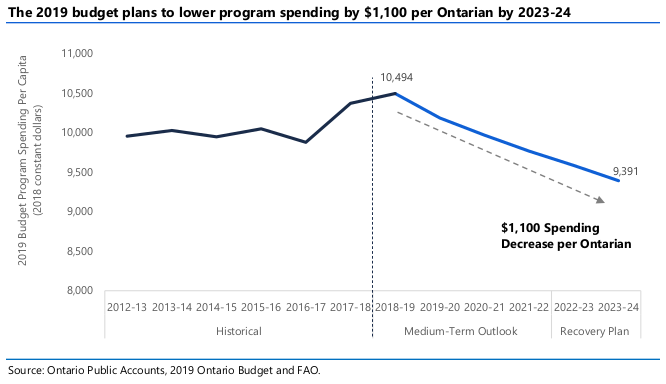 Second, while not discarding the Liberal efforts to foster an investment climate favourable to the ‘gig economy’ and financial capital in Toronto and southern Ontario, the Tory budgetary strategy reorders an array of departments and agencies to boost the development sector in general and extractive capital investment in particular. This includes a major deregulatory agenda to be pursued through a task force with a mandate to reduce the ‘regulatory burden’ by 25%, but also the creation of the Office of Economic Growth and Innovation.

Departmental budgetary allocations also disclose this agenda. The budget for the Environment and Parks ministry, for example, is to be cut by some 35%, which will gut already enfeebled enforcement capacities and further open up parks for commercialization and development. But the biggest departmental cut is the almost halving of the budget for Indigenous Affairs. This will slow a range of land claim and treaty settlement issues and also undermine processes of consultation and collaboration over resource development. The government is seeking to restrict regulatory processes and other obstacles to resource development in the ‘Ring of Fire’ in Northern Ontario, as well as a number of areas where conflicts over logging and mining exist. As Sol Mamakwa, New Democrat MPP representing Kiiwetinoong in northern Ontario, bluntly stated, “Ford is dragging Ontario further away from reconciliation.”

Third, the Ford Budget explicitly targets reducing social provisioning costs and labour costs for business. Spending for the education sector, for example, is to grow on average only 1% for the next three years, meaning annual cuts in real terms. The training, university, and colleges sectors are even harder hit, with budget allocations to decline on average by 1% over the same period (and also facing cuts to student loans and student fees). Healthcare spending is to grow by a modest 1.6% per year on average over three years, but this is far below trend rates of growth in the sector and what healthcare providers were requesting just to stay in the same place. The single healthcare agency being set up and the amalgamation of health districts are to facilitate a dramatic restructuring of healthcare delivery to further cut costs.

The third largest proportional cut, nearly 25%, hits Municipal Affairs and Housing. The budget signals a market-driven policy strategy in which regulations are to be ‘streamlined’ and development costs reduced to increase ‘housing supply’. But while the words “alcohol” and “beer” appear 46 times in the budget, the crisis of housing affordability does not merit a mention. The stock of Toronto Community Housing units in need of major repair continues to grow with an estimated backlog of more than $3-billion. The budget also walks back a planned hike to the municipal portion of gas tax revenue, estimated to cost the city of Toronto $1.1-billion in planned transit investments as Ontario municipalities continue to struggle with fiscal capacities incapable of funding public transit needs.

Few ministries have been left unscathed, with everything from Seniors’ Affairs to Children’s Services to Legal Aid moving forward with less capacity than they had on April 10th, including a $1-billion cut to social assistance alone. According to the Conservatives’ own figures, Budget 2019 puts $5-billion back into the pockets of the business community, nearly $1.3-billion resulting from the cancellation of the planned increase in the minimum wage. Another $1.4-billion is estimated to come from a 30% reduction to workplace safety insurance premiums for employers, although the WSIB agency is already plagued with problems of understaffing, backlogs, and denied claims.

The budget also moves away from proactive Ministry of Labour investigations toward a “self-reliant” model, along with a planned $10-million cut by 2019-20. Employment blitzes carried out by the Ministry of Labour between 2015-17 found high levels of violations, including non-compliance rates of 84% for young workers, 61% for temporary foreign workers, 54% in the construction industry, 75% for those in precarious jobs, and 72% of repeat violators. These changes follow on the heels of new regulations that allow employers to pay less for overtime work.

The fiscal guidelines of budgets are but one aspect of state economic policy attempting to manage the competitive imperatives of capitalism. Budgetary policy provides, however, the outline of the economic mechanisms – taxes, resource allocations across departments and agencies, agendas for monetization and dispossessions of public assets and lands, strategies for debt management – that will be deployed to support capital accumulation and the policy regime that will skill, employ, and discipline workers. The first Ford budget vigorously affirms Ontario’s commitment to neoliberal economic policy and austerity. The government will offer a sweeping set of material incentives and regulatory changes to encourage business investment, while ‘inefficiencies’ in social spending will lead to program cuts far past this fiscal year. Development at whatever the ecological and social costs is what is meant by the Conservatives’ tired slogan of Ontario being ‘open for business’.

For the Conservative Party of Doug Ford, democracy is but one more ‘inefficient’ entanglement getting in the way of business. The permanent austerity that has been at the core of Ontario budgetary policy for two decades now illustrates all too well the democratic limits of the Ontario state. But the budget also makes clear the alignment of the Ford regime with the authoritarian right-wing populisms gaining traction across the world. This is the political terrain upon which the growing social movement – of teachers, healthcare workers, parents, First Nations, tenants, ecologists – will be forming its strategy and building its resistance. In a so-called era of disruption, the most decisive act of rupture from the way things are will be to make possible another Ontario freed from the constraints and pressures of market imperatives. •

Bryan Evans is Full Professor in the Department of Politics and Public Administration, Toronto Metropolitan University.