Trump, Johnson, and Bolsonaro in the Swamp

How is the Pandemic Going for You?

The spectacular failures of Brazil, the UK, and the USA during the COVID-19 pandemic offer valuable lessons on what must never happen again: the wishing away of the virus, minimising the potential impact of a pandemic on public health and the economy, delaying inevitable lockdowns, the list goes on. The failures also shed a powerful light on the root causes of the devastation. 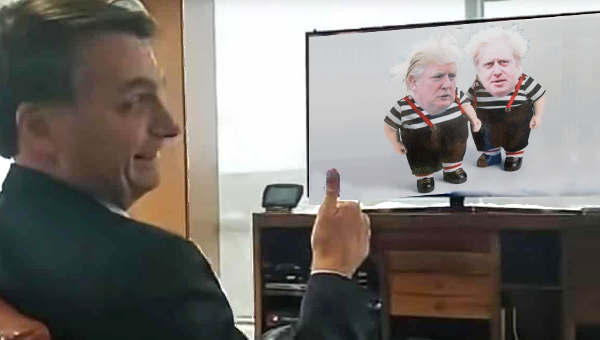 In summary, the human disaster in our selected countries is unlikely to be compensated for by a shallower economic downturn – quite the contrary, they are likely to do worse than average – dismantling the argument that protecting the economy should be a priority and ‘if some pensioners die [as a consequence], too bad’.1

The first step is to recognise the immensity of the catastrophe (see Table 1).

Our selected cases (the ‘Threesome of Calamity’) share obvious features centred on leadership: they are governed by arrogant, selfish, self-promoting, pompous, rude, and patronising buffoons, displaying symptoms of histrionic personality disorder if not psychopathy, and bearing overtly authoritarian ambitions to break and remake the Constitution and the apparatus of the state. Surprisingly, they are uninterested in building up mass support movements, preferring instead to cultivate adoring but disorganized fans: Donald Trump hijacked the Republican Party but has no use for it beyond the electoral machinery and fund-raising; Boris Johnson has no time for the Conservative Party that he remade in his ‘Brexity’ image, and Jair Bolsonaro does not even belong to a party (his attempt to create the ‘Alliance for Brazil’ stalled miserably).

Sadly, that is just the beginning: they lie brazenly and compulsively; claim undeserved merits; deny evident truths; proclaim the non-existent; and pour abuse on doubters, fact-checkers, holders of different views, scientists, and women. They are short on humility, impervious to remorse, and quick to claim that whatever they do is ‘best in the world’, even when it has failed or even backfired. Despite their authoritarian instincts, these leaders remain slaves to the electoral process: everything hinges on the next election, anxiously. And still more: they pick calculated fights with the media, which guarantees visibility even if under the unflattering light of methodical criticism (which, paradoxically, tends to consolidate the allegiance of their fans). The commentariat has struggled to account for their popularity despite daily trespasses against ‘civilised’ politics.

This combination of features proved lethal under the stresses of the pandemic. Risks were downplayed because precaution would look bad, suggest weakness, or impair their electoral prospects. Bluster, denials, and lies had sufficed in the past, but the coronavirus was unbending. Public health responses were delayed because the state machinery stalled when it was confronted by a challenge unrelated to the promotion of the Leader. Playing on the defence did not come naturally to our exemplars, and they fumbled. Despite their telegenic prowess, they were unable to feign sympathy for the Other or express pity, shame, or remorse, and came out callous; they could not expound on the complexities of the pandemic,2 and looked ignorant; and they could not lead a purposeful institutional response and looked clueless. Trump and Bolsonaro overtly undermined their own health experts as they peddled quack cures, while Johnson’s experts ‘disappeared’ as soon as they went off-message.3 Worse, accustomed to politics as war (Remain vs Leave; Tories vs Corbyn; gun owners and White supremacists vs gun controls and BLM protesters; Obamagate vs Russiagate; Lula vs Lava Jato; traditional media vs evangelical start-ups, and so on), and enmeshed in battles against the ‘deep state’, our leaders found themselves unable to address COVID-19, an adversary that did not respond to the politics of division and resentment.

These dysfunctions were not merely due to individual incompetence or obtuseness; they are revealing of a deeper political malaise that has affected the three countries especially badly. As the transition to neoliberalism restructured economic and social reproduction in the UK since the mid-1970s, in the USA since the end of that decade, and in Brazil since the late 1980s, it created a large array of economic and social ‘losers’: millions of skilled jobs were eliminated; entire professions vanished or were exported; and employment opportunities in the public sector worsened because of privatizations and ‘retrenching’. Job stability declined in the formal sector, and pay conditions and welfare protections tended to deteriorate for everyone.

The institutionalization of a neoliberal democracy furthered the alienation of the ‘losers’. Their concerns were ignored, and their resentments, fears, and hopes were captured by the mainstream media and displaced into ethical conflicts between ‘good’ and ‘bad’ people, framed by commonsensical notions of ‘dishonesty’ at the individual level and collectively, by visions of ‘undue privilege’ granted by the state to the undeserving poor, women, minorities, foreigners, and foreign countries.

This process corroded two pillars of capitalism. First was the enlightenment commitment to science: not only were universities delegitimized (‘Mickey Mouse courses’, ‘overpaid managers’, and high student debt – all due to government policy – as well as ‘left-wing indoctrination’ and ‘cancel culture’, to be repressed). Along similar lines, the neoliberal cult of the individual fed the individualization of truth itself: it is my right to believe that the Earth is flat, and no pointy-head has greater authority than me on any subject; no one can impose masks, vaccines, or lockdowns on me; the coronavirus is a hoax because I say so,4 and so on, in a bonfire of certainties that, if unchecked, would consume geostationary satellites, long-distance transport, the internet, statistical medicine, water treatment plants, and much else.

The second pillar was, democratic politics, lost both legitimacy and efficacy because of the exclusion of economic matters from debate: under neoliberalism, the superiority of the market and the imperative of inflation control could not be contested or even debated, and the institutions of the state were remade in order to insulate neoliberal policies from the vagaries of electoral accountability. The law enshrined deficit ceilings, inflation targets, and privatizations, while a barrage of propaganda promoted financialization and overconsumption as the essence of the ‘good life’. Alienation inevitably followed, and given the earlier destruction of the left, a political vacuum emerged in which the opposition dissolved into anomie, enraptured by ‘spectacular’ authoritarian leaders and overwhelmed by the far right. These destructive tendencies were intensified by the Great Financial Crisis, starting in 2007, which culminated in a decade of ‘fiscal austerity’ that was justified by the need to pay for the state policies to salvage finance but, in reality, rolling out further destructions of sociability and new waves of social reengineering. The rise of ‘spectacular’ leaders is, then, neither a temporary aberration nor a reversible political excrescence but, rather, a by-product of the failure of financialization, the decay of neoliberal democracy, and the delegitimization of dominant ideologies and modes of representation of reality.

This unstable political dynamic was overwhelmed by COVID-19. Brazil, the UK, and the USA watched in puzzled horror as the coronavirus, impervious to arrogance, bluster, and screeching denials, cut short tens of thousands of lives. In the meantime, their populations were denied knowledge that a whole host of countries and regions had managed to contain the pandemic; scandalously, the (relative) successes in Scotland, Wales, and Northern Ireland were glossed over in England as if they were either unremarkable or insignificant, but then, England has always minimised smaller nations, starting with the nearest ones.

Multiple experiences of success against the coronavirus are available. They show that different combinations of state capacity, rapid response, universality and flexibility of health systems, resources, technology, and social control could stem the coronavirus. The disaster was not inevitable; every death must be accounted for. In contrast, the Threesome of Calamity displayed a deliberate lack of preparation, delivered insufficient resources to their health systems, promoted disorganized and contradictory policies, chose poor strategies of implementation, and prioritized staggering corruption to the preservation of life. The pandemic shows not only that the wages of arrogance is death; it also shows that death was the avoidable consequence of a declining modality of neoliberalism in three long-suffering countries. •