It’s hard to walk across the University of Toronto (U of T) campus without your eye catching the grand, pale-bricked building that sits parallel to the greenery of Queen’s Park. It is even harder to find a U of T student who has not witnessed or participated in a protest on the front lawn of the same building. The Ontario Legislative Building is home to our province’s Legislative Assembly and it hosts the government that has repeatedly told teachers, students, and parents that primary and secondary education warrants cuts to funding instead of investments. 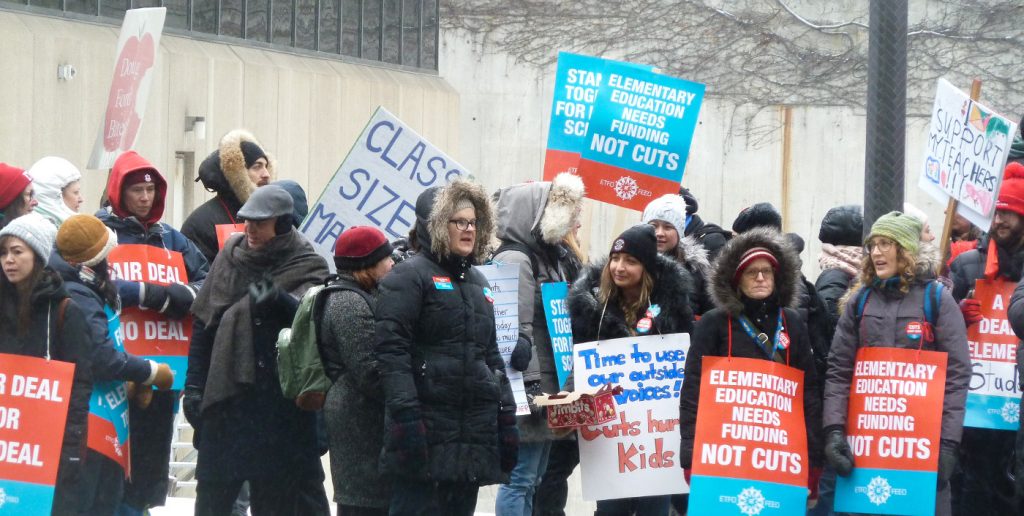 In March 2019, the Doug Ford government announced a series of cuts to education across the province. Outrage broke out across Ontario, leaving educators, parents, and students concerned for the future of Ontario’s plan in education. The Ford government has cut programs and services, capped wages, increased classroom sizes, introduced mandatory e-learning, and plans to eliminate thousands of teaching positions while it cuts support programs for the most vulnerable students across the province. After months of failed negotiations and bargaining between Ontario’s teachers’ unions and the government, education unions across Ontario stepped forward with overwhelming numbers of support from their members in favour of strike action. During December and beginning the week of January 20th, a series of walkouts took place among elementary and secondary schools across Ontario.

Teachers and education workers are furious at the provincial government’s announced cuts and have good reason to be. The implementation of the Ford government’s changes will cause harm to our province’s education system and will substantially injure students’ potential in the classroom. The Ford government is looking toward education as a solution to fix the provincial budget, but fails to recognize that it will be operating at the detriment of students. Under the proposed cuts, class size averages in Grades 9 through 12 are expected to increase to a maximum of 28 students. Even if the government actually follows through on its proposal to reduce average sizes to 25 – something by no means certain – teachers’ and education workers’ efforts to provide engaging learning conditions and adequate support for individual student needs will still be hobbled. The increase in class sizes, ultimately means the loss of teaching positions across the province, leaving thousands of teachers unemployed.

In advance of this, the government plans to cap teachers’ wage increases to 1 per cent, removing the right for education workers to negotiate their pay without interference. This speaks to how little the Ford government values the work of educators in the public sector. Moving forward, the proposed withdrawal of services for students with special needs and mental health needs chokes off student potential while jeopardizing their future success. The provincial government claims this plan is set to “build an education system for success.” It sounds like quite the opposite.

After more than two decades, every teachers’ union in the province will take part in job action involving work-to-rule and rotating strikes. This means elementary and secondary students will be out of school for an indeterminate number of days, leaving parents of young children scrambling to find childcare. While writing this, I can’t help but think what kind of message this sends to our society. How do students feel, knowing that their education is being jeopardized due to the provincial government’s inability to listen to their needs? How do parents feel, knowing that their government has left their children home for the day? How do teachers and education workers feel, knowing that their career is unworthy of government advocacy?

With no agreement on the negotiating table the Elementary Teachers’ Federation of Ontario’s (ETFO) 83,000 members are walking the picket lines twice a week. In a recent press release, ETFO president Sam Hammond said, “We have no choice but to commence rotating strikes,” as a way of “forcing the government to get serious about negotiations and the future of public education.”

This week, alone ETFO members will stage rotating strikes every day across the province with one province-wide walkout on Tuesday. Secondary school educators belonging to Ontario Secondary School Teachers Federation (OSSTF) will be striking at 9 boards across the province on Thursday. English Catholic teachers across the province are stepping up their work-to-rule, refusing extra work beyond scheduled teaching and supervision duties. Twelve thousand members of the Association des Enseignants Franco-Ontariens (AEFO) will walk off the job this coming Thursday.

Concerned parents and guardians with young children have taken matters into their own hands to resist the Ford government’s cuts to public education – organizations such as Ontario Parent Action Network demonstrate their fellowship with educators across Ontario by setting up solidarity camps for parents who may have trouble finding accommodations for childcare when school is closed. As tensions continue to rise across the province, strike action remains the only viable way to pressure a tentative agreement, even if it means compromising taxpayer’s daily schedules.

As a student with generations of educators in my family, I have come to understand, first-hand, the implications of cuts to education and the repercussions of voting for a government which fails to see education as an imperative and worthy part of our province’s future. The Ford government’s changes to education are unwanted guests, and we will not stand for it. Ontario’s education does not need cuts. It needs a government that is willing to invest in encouraging the minds of tomorrow and a premier who is brave enough to lead our education system forward, not sabotage it. •

For further information and updates on the Ontario Teachers’ Strikes, visit knowmore.ca.

Victoria Lunetta is an undergraduate student at the University of Toronto taking a major in political science and a double minor in women studies and music history.