Ontario Teachers Ramp Up the Pressure on the Tories

Ontario teachers are ramping up their fight against the Tories’ 18-month attack on public education. 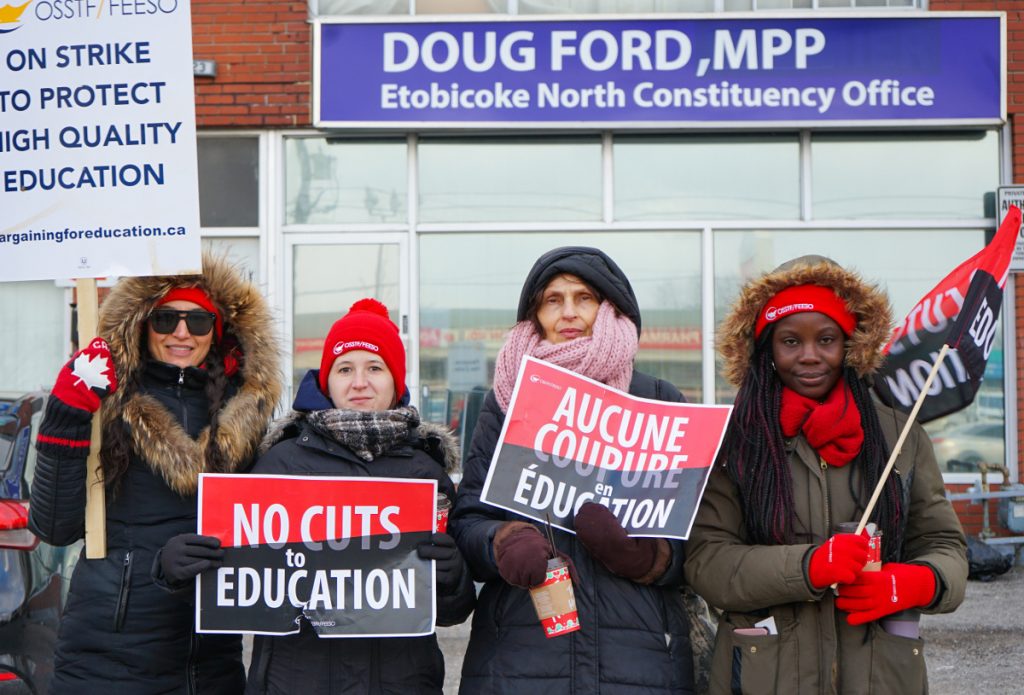 Cranking up pressure on the government was pretty clear at the Elementary Teachers of Toronto’s (ETT) Federation Day last Friday. Mind you, both local president Joy Lachica and Elementary Teachers Federation of Ontario (ETFO) head Sam Hammond, were keeping their cards close – acknowledging the 98 per cent strike vote of teachers, and the need to “harness our power” though not getting too specific about what comes next if the work-to-rule doesn’t produce results.

But the messages sent by the speakers ETT invited to the gathering of public elementary teachers across Toronto delivered a message of activism more plainly. Rachel Huot of Ontario Parent Action Network assured teachers that despite the government’s attempt to drive a wedge between them and parents, they won’t be on opposite sides of job actions. “This is our fight,” she said.

There was Maggie MacDonell winner of the 2017 Global Teacher Prize describing how she pushed, badgered and organized her way to create programs for Innuit youth in her Nunavik community of Salluit; about the bicycle repair shop worked by a notorious but reformed ex-bicycle thief or the Nunavik Running Club which has enabled young people to travel widely to compete. She spoke about the community hauling equipment for a rec centre overland by snow machines because the ship that was supposed to bring it all in, couldn’t make it into port. It was all about what a teacher can do as an organizer in her community.

Geneticist David Suzuki might have been talking directly to the Ford government as he outlined the dire environmental situation in which humans find themselves, the multiplier effect of our vast destruction of the natural world: “we think we’re so clever, but we have no idea what the long-term ramifications will be.”

But it was Jollene Levid who concentrated on the task facing Ontario educators right now. She is an organizer for the United Teachers of Los Angeles (UTLA) which won major concessions after a 6 day strike last winter.

Los Angeles schools had been crumbling for years. Class sizes had risen anywhere from 30 in elementary schools to as high as 50 in high schools. Since 2008, austerity measures deprived many schools of caretakers, guidance counsellors and librarians. It was normal practice for school administrators to run random searches of their kids. Teachers and educational workers struck for liveable wages, but also for improvements to the conditions in schools as well as the neighbourhoods around them. They demanded more teaching, less testing and for a cap on privatized charter schools so popular across the United States.

UTLA won a 6 per cent retroactive pay increase for education workers, a nurse in every school 5 days a week, some reductions in class size, more librarians in secondary schools and more counsellors. LA educators also managed to get the Los Angeles school board to cap the number charter schools allowed to open.

The gains they won came from organizing and building a coalition with neighbourhood groups as well as organizations like Black Lives Matter. Over 5 years, UTLA transformed itself from a service union focusing on wages and working conditions for its members, to a movement for social and economic change. The union, Ms. Levid explained, recruited natural leaders from school sites and taught them how to organize. It created a research department and kept track of educators’ commitment for organizing. To pay for this, it raised members’ dues after getting a commitment from them that this was the right way to go. To further test that commitment, it re-signed 98 per cent of UTLA members to their own union. Eighty-nine per cent of them voted in favour of a strike.

Union leaders tested the water as they moved toward the strike and the campaign was built around escalating actions: handing out flyers, then picketing, then holding regional rallies and when it was clear there was support for it, going for the strike vote.

“Everything we did,” said Jollene Levid, “was building toward our capacity to strike.” All the members knew this was where they, as a union, were heading. UTLA was “unapologetically ideological” she said, adding that in these times of intense political and economic oppression, we all need to move to the left.

This is where educators across Ontario find themselves. They face a government that has been reckless with everything it has put its hands on and is now trying to touch up its image after a precipitous fall in popularity. After a disastrous federal election, the Tories are vulnerable.

But the Ford government is never going to be reasonable despite what Education Minister Stephen Lecce claims; it’s in too deep. It can’t afford to look weaker than it already does. If it had any sense of reason it would never have cut health care, social services, child care, environmental programs, the cap and trade agreement, half of Toronto’s city councillors, the Basic Income Pilot Project, the province’s child advocate, school board budgets and endlessly so on, while it appointed friends to key government positions.

No one, likely not even the Minister, believes that this government is bargaining in good faith with educators. It capped wage increases to 1 per cent and offered to increase class sizes to only 25 rather than 28; to require secondary school kids to take only 2 credits online rather than 4. This doesn’t take into account that slashing school board budgets alone, resulted in higher class sizes, cuts to programs and cuts to services.

Education sector unions tested the waters and have seen tens of thousands of people show up to rallies over the past year. Parent and community groups are cropping up everywhere; students have gone out on strike to stop education cuts. Unions need to keep moving forward as they build a coalition of public and Catholic teachers in both elementary and secondary panels to put an enormous strain on Doug Ford and the sycophants who enabled his policies. As one teacher on the strike line last Wednesday said:

“I think it’s great that we’re out today. I think it’s what it’s going to take, really causing that disruption that puts the pressure on the government that forces them to come to the bargaining table. It’s also really heartening to hear all the public support – you can hear that in the background… it sends a really clear message to the government that the public, parents, students and teachers united are against these cuts.”

Educators along with parents and other allies have the numbers and credibility to push this government hard.

Unions should not back down; they should keep demanding a full restoration of all the money and staff taken from education over the past 18 months. They also need to be mindful of parents’ support, something that Stephen Lecce is doing his best to split away from educators as he puts out the fiction that their job actions are mostly about wages. Still, if this all comes to a longer strike, unions need to be prepared to address the needs of parents like those who require supervision for their children while they’re at work. They have got to keep parents on their side and be willing to go to a lot of trouble to do so.

As the Los Angeles educators understood, what’s at stake here is not just wages or even class size and the number of courses kids might have to take by computer. It’s much bigger than that. Ontario is stuck with a government that has no progressive ideas – a government bent on squeezing the health out of this province to make a case for privatization of basic services. This government ignores the future and we can thank educators and the people who support them for doing all they can to bring it down. •

Dudley Paul is an editor of School Magazine.