Anything that Ontario Education Minister Stephen Lecce says should be taken with a bag of salt. His ability to dissemble is astonishing. So, when he said on Tuesday afternoon that high school class sizes would be 23 starting in the 2020-21 school year and that parents would be able to opt out of e-learning courses required to obtain a secondary school diploma, it was time to get out and polish the magnifying glass. 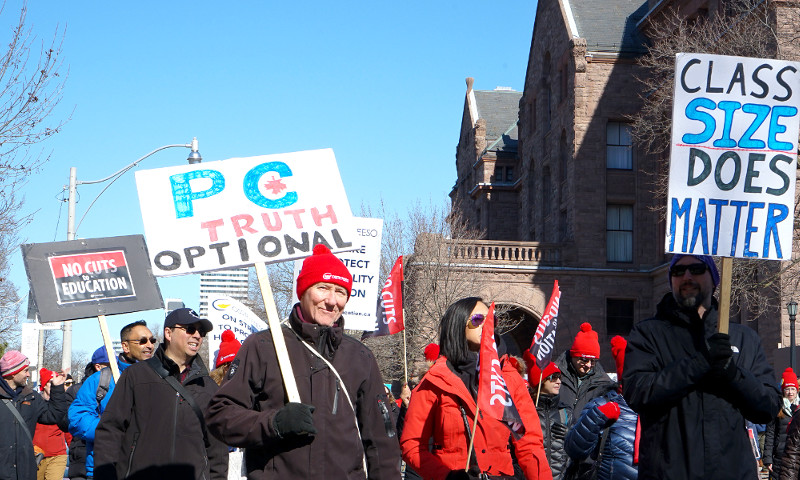 Minister Lecce said that class averages for high schools would be “effectively the same as this year.” He’s gone on to reiterate that point since. Challenged on CBC’s Metro Morning last Wednesday about why he was increasing class sizes at all, he retorted: “we’re freezing them at the current rate. Next year’s rate will be effectively 23.” Mr. Lecce is also “freezing” the average class sizes from grades 4 to 8 at their current rate of 24.5. The trouble is that, up until the beginning of this school year average class sizes were 22 for secondary students and 23.8 for junior and middle school kids. I don’t think he can relate a simple unembroidered message.

Let’s be clear, Minister Lecce has increased class sizes by an amount that has already caused chaos in schools as they attempt to cope with the effect laid-off teachers had on course selection and availability as well as educators available to work with students in classes from grades 4 to 12. He plans to leave them the way they are. He also has no plans to address class-size maximums or caps, leaving it to cash-strapped school boards to decide on upper limits for some classes so they can run smaller classes for specialized courses, like shops and special education.

It is a good question: Why increase class sizes at all? And why keep e-learning courses mandatory?

On Tuesday Mr. Lecce declared that “parents know best about how their children can adapt and learn by online courses. By giving parents the option to opt out of mandatory online courses required (my emphasis) for graduation, parents not unions will make the decisions that are best for their children.”

Now, that was a whopper. Mr. Lecce gets the gold star for misinformation.

A couple of facts intrude here. First, thousands of those parents, along with other people involved in education told him clearly that they didn’t want larger class sizes and mandatory e-learning. Mr. Lecce hid that information and, until he was found out, made out as though he was being reasonable in dropping the original four mandatory e-learning courses to two. His pious remark about parents knowing best is a diversion – only meant to introduce the deception that unions have been pushing to decide what’s best for kids. The unions, by the way, are only saying that e-learning should not be mandatory.

Also, how can you “opt out of a mandatory course required for graduation?” Mandatory means you have to do it, so I think Mr. Lecce was playing a word game here: e-learning courses – could be 2; could be more, since he’s not telling us – are still mandatory, but maybe, parents who know the system well enough will be able to have their kids avoid taking them somehow. He’s not telling us how they’ll do that.

Had Mr. Lecce decided to be uncharacteristically transparent and honest to the people his government has deceived, he could have admitted: “My government wanted to save money by increasing average class sizes. That way we could cut educators. We figured that we could cut more educators by forcing kids to take 4 e-learning courses. When those plans started to smell like last week’s fish, we decided to ease back a bit – after all we knew no one liked them. When it turned out that you all knew we knew, we wrapped everything up, threw it all out and pretended we had a good idea.” 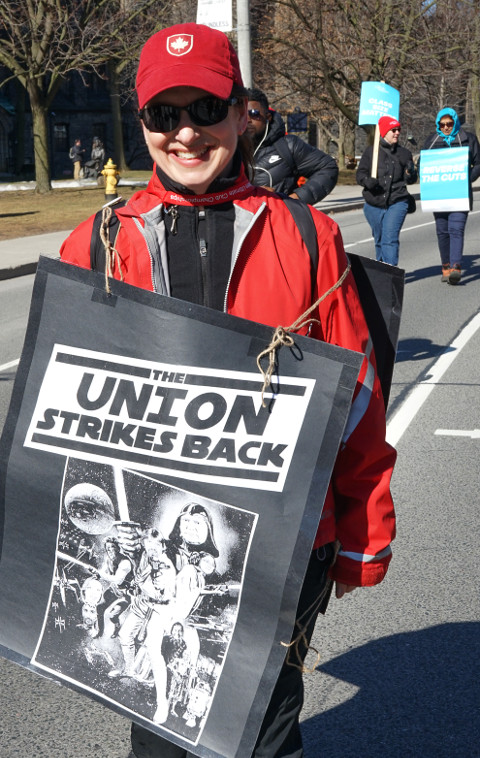 Do not trust what this man says – educators sure don’t. Mr. Lecce is not bound by anything that he said on Tuesday because none of it was proposed through collective bargaining. The Minister could quite easily change his mind and, hand over heart, say that he had done his best but the teachers wouldn’t budge on this or that issue and now he’s forced to do another do-over. Many teachers I spoke with on Thursday’s Queen’s Park picket line said Mr. Lecce needs to bring his proposals to the bargaining table before they’ll even consider them.

There’s also the issue of elementary teachers. Like their secondary colleagues, their focus has been, not on wages and benefits as the Minister claims time and again, but on returning class sizes to where they were before the Tories increased them last year. Mr. Lecce offered nothing to that end. With nothing to ease the conditions of elementary classrooms he’s just trying to drive a wedge between educators.

What he’s proposed isn’t enough. OSSTF president, Harvey Bischoff told Metro Morning on Wednesday that “this 23 he’s (Stephen Lecce) talked about is well over the 1000 fewer teachers we had in our schools last year. That’s still thousands and thousands of fewer course options; it is fewer special education teachers who serve kids with special needs.” E-learning is still mandatory, so trying to get out of it, teachers told me yesterday, will probably be difficult, especially on people whose first language isn’t English, or others who don’t know the system and how to negotiate it.

I hope that educators are able to hold the line on the conditions that make education valuable for their kids. They owe that much to the thousands of parents who have supported them in their struggle to restore education just to the level it was in 2018. Over the past 18 months, the Ford government has vandalized schools that were already in trouble due to a generation of underfunding. It squeezed more money and staff from them and then tried to say “Come on, negotiate with us, we’re giving you back some of what we took. We’re being reasonable, here.”

You can’t negotiate with vandals; they’ll always be just what they are. •

Dudley Paul is an editor of School Magazine.