German Unions and the Climate Crisis

If the summer holidays interrupted the school walkouts, the teenager-led Fridays for Future movement hasn’t let up its fight to save the planet. Ever since the start of the movement, leaders like Sweden’s Greta Thunberg and Germany’s Luisa Neubauer have worked to build broader social ties than previous generations of environmental activists, including with organized labor. In this spirit, September 20 will see the beginning of the “Earth Strike,” a planned week-long general strike around the world to stop production and draw political attention to the climate emergency. 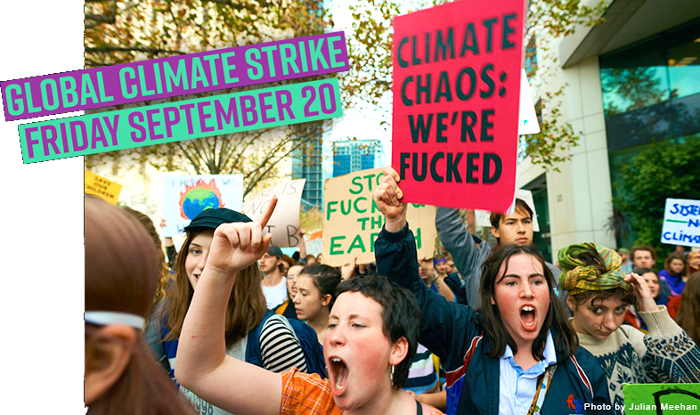 The need to “save jobs” has historically been counterposed to the call to shut down harmful industries. Yet the sheer scale of the catastrophe we face has focused minds on the need to overcome the divide between green and labor activism. In particular, the mainstreaming of the demand for “climate justice” – arguing that the poor, vulnerable, and exploited shouldn’t be the ones paying for the transition to a green carbon-neutral economy – has shown that saving the planet and social justice really can go hand in hand. This is epitomized by Alexandria Ocasio-Cortez’s call for a Green New Deal.

Germany has an especially deep-seated history of ecological mobilization, with even radical campaigns enjoying wide popular support. Its environmental movement has historically been characterized by a strong anti-authoritarian current – indeed, in the 1970s and 1980s, the movement to halt nuclear-waste transports used forms of civil disobedience associated with the US civil rights struggle.

Unlike in many other countries, these movements are not on the fringes of politics but are deeply rooted in neighborhoods and communities. Yet whatever the strength of climate activism, labor unions have traditionally remained aloof from green struggles. But now, riding the wave driven by the Fridays for Future movement, organized labor is beginning to adopt the call for the green transition as its own.

There’s plenty of obstacles to such a conversion. In recent years, civil-disobedience climate activists have focused their attention on shutting down two open-cast lignite coal mines, one in the Rhineland and the other in Lausitz in the former East Germany. Lignite coal is one of the least efficient and dirtiest energy sources, but a key job creator in both regions. This has sparked repeated clashes between members of the chemical and miners’ union – the IG BCE – and the activists who came to the Rhineland to occupy the Hambach Forest and the open-cast mine. The IG BCE’s general secretary, Michael Vassiliades, insisted on the need to put jobs first and think about environmental issues second – guaranteeing conflict between labor and climate activists.

This stance matched the IG BCE union’s record participating in the German government commission to phase out lignite – a slow process that actually sets the country in contradiction with the Paris climate agreement. For now, all stakeholders, including the unions, agree that coal production should stop by 2038, yet IG BCE’s focus on jobs alone has isolated it from any notion of “climate justice.” Certainly, there are reasons for concern – the renewable energy sector (both wind and solar) is notoriously anti-union, in contrast with the social dialogue and partnership engrained in older forms of production. Yet the risk is that precisely this blindness to green issues will allow employers alone to assume the mantle of directing the ecological transition.

Not all of organized labor remains mired in such a purely defensive position. Following Fridays for Future’s demand to shut down coal production by 2030, the ver.di services union’s general secretary, Frank Bsirske, stated that the phaseout should be hastened as far as possible. This call has sparked a mobilization by the far-right Alternative für Deutschland (AfD), which has opportunistically attacked Bsirske as anti-industry and wanting to harm the German worker. Nor have Bsirske’s comments endeared him to all unions. During activists’ “Ende Gelände” climate camp, the youth wing of the IG BCE camped out to demand job security and the continuation of the open-cast mine.

Out of the Rut

As we see, Germany’s green consciousness, the rising fortunes of the Green Party, and the prevalence of Bioläden stores selling ecologically friendly food do not necessarily translate into unions taking more progressive stances on climate issues. If anything, the radicalism of the climate activist milieu, as well as the corporatism of “jobs first” trade unionism, has created a deeper rift between labor and environmental groups than exists in other countries.

However, the climate strike on September 20 promises to begin to overcome the diffidence between unions and environmental groups. While German labor law does not permit political strikes of any kind, Fridays for Future’s climate strikes have already struck a chord with trade unions in both manufacturing and services industries. And they’re beginning to mobilize.

In June, Germany’s largest union, the IG Metall, organized a demonstration to demand a fair and ecological transition. The wider crisis of the German car industry, concentrated in the scandal over Volkswagen faking its emissions figures, has highlighted the particular ills of the auto sector. Given the close relations between industrial manufacturing unions, German companies listed on the DAX stock exchange, and the German state, this demonstration could represent a step forward for a convergence between unions and environmental groups. This labor-green alliance is particularly necessary given that climate change, as well as new technological developments, are going to force German auto factories to switch to producing e-cars or different vehicles altogether.

Organizing this demonstration, IG Metall chartered ten trains and eight hundred buses to fill the streets of Berlin with tens of thousands of metalworkers. This represented a significant step for the union and its engagement with the green transition. While no representative from Fridays for Future addressed the demonstration, it is unthinkable that it could even have happened without the ongoing Fridays for Future mobilizations. At the time of writing, the IG Metall is still discussing whether to support the September 20 climate strike.

More promising are developments in the transport sector, where railworkers’ union EVG has advertised its own members’ presence on the Fridays for Future demonstrations as well as its support for the movement’s goals. This should not come as a surprise given the movement’s demands for better and more accessible public transport. The next step is for this self-interested solidarity to also translate into conductors and other staff bringing trains to a halt for the Earth Strike.

But the unions quickest and most vocal in aligning themselves with the burgeoning climate strike movement and the strike call are those in the services sector. Here, the relationship between employers, the state, and unions is not so defined by corporatism, and workers do not need to fear job loss to the same extent.

Last week, Bsirske argued that ver.di members should follow Greta Thunberg’s call and join the September 20 strike. Ver.di’s Twitter account shows Bsirske saying, “Whoever can do so should clock out and go out on the streets. I will definitely go.” Luisa Neubauer, one of Germany’s most prominent young climate strikers, termed Bsirske’s call “an infinitely important step,” showing that the climate strikers are taking note of the power of organized labor.

Ver.di is not directly calling its members out on strike. But the union is encouraging members to collectively take a day off to support the movement or organize an “active lunch break” – a lunchtime assembly outside of their workplaces. This could be a useful way to engage union members and other workers in the fight for the planet and at the same time raise the profile of the Earth Strike. Given that a recent rank-and-file-led petition on climate change gathered more than 46,000 signatures, it appears that service workers in both the public and private sectors could begin to move into action.

Unlike in the United States, where teachers have been at the forefront of building social-movement unionism and striking across right-to-work states, German teachers are civil servants and thus do not have the right to strike. While they cannot walk out, the education union GEW has, however, backed the students in doing so. The union’s executive member for schools, Ilka Hoffmann, has publicly supported the strike but also criticized it for not doing enough to emphasize the issues of labor exploitation and social justice that relate to workers. The North Rhine–Westphalian section of the GEW has also decisively argued for a stop to reprisals against students who take strike action, though it remains unclear what forms of action educators will themselves be taking in the Earth Strike week.

The strike also looks set to affect the construction sector. Germany’s largest construction and property services union, the IG BAU – which coincidentally has the word “umwelt” (environment) in its name – has called on its members on building sites to join the climate strike. It demands that Germany reduces its CO2 emissions by 40 per cent by 2020.

German labor law forbids workers from taking political strike action. The IG BAU is thus pressuring employers to give their employees the opportunity to participate in the Fridays for Future demonstrations. This intelligent move plays the ball back into the employers’ court, forcing them to show how far their proud identification with “corporate social responsibility” and “green workplace” initiatives really goes. Such a move to pressure employers to shut down could give the Earth Strike an entirely different dimension.

If unions are going to marry the green transition to the defense of workers’ interests, they need to think hard about how they can use their institutional and organizational power at the workplace and sectoral level. After all, 53 per cent of workers and employees are still covered by collective agreements, giving many unions a great deal of leverage in shaping the labor market.

Those enjoying such a strategic position could use it to demand upskilling for workers in key industries that have no future in a carbon-neutral economy, enshrine new health and safety regulations that could contribute to a decrease in carbon emissions, and force employers to change the way goods are produced and services are provided. Among others, unions could use their collective agreements to move toward a four-day week, which would also reduce CO2 emissions.

Despite all these positive developments within the union movement, Germany’s mainstream media continues to frame the emerging dialogue between Fridays for Future and the trade union movement in binary terms, as if the defense of jobs will inevitably act against the wider interests of the planet. This is exactly the narrative that unions need to explode.

Thus far, German unions’ support for the Fridays for Future movement may remain symbolic – certainly, they could do a lot more to challenge Germany’s carbon economy. However, their participation on September 20 could start to close the gap between organized labor and Germany’s already strong environmental movements. This is more necessary than ever if working people are not to pay the price for a transition toward a green economy. •

Mark Bergfeld is a socialist activist. He is the author of “Portugal: Crisis and Resistance” and appears frequently on national and international television to give insight on protest movements in the UK and Europe. He is the Director of Property Services and UNICARE. His writings can be found at tinyletter.com/mdbergfeld, and tweets at @mdbergfeld.