What’s at Stake in the Ontario Election

With just days to go until Ontario voters go to the polls it is worth remembering what is at stake in this election.

The Ontario Liberals have been in power since 2003. It is clear their government is well past its due date. Years of scandals, Bay Street policies and austerity have left a sour taste in the Ontario electorate’s mouth. Last Saturday, in an unprecedented announcement, Kathleen Wynne conceded that the Liberals will not be forming the next government. The question before the voters now is whether they will have a government led by Doug Ford and the Tories or the New Democrats (NDP). 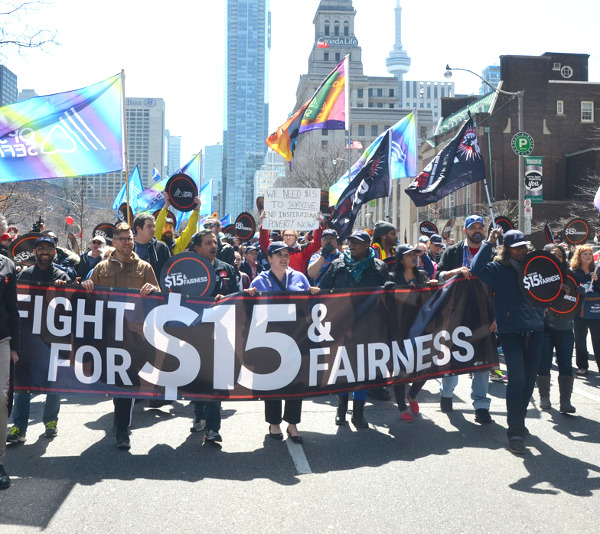 So what’s in store if Ford wins? It is hard to say with precision exactly what will happen as the Tories only just released their platform and it is not even costed. What we do know is that the Ford government’s budget will have massive cuts in store for Ontario. Because of previous Liberal accounting tricks, It has been revealed that there is actually a $12-billion deficit. So what will Ford cut?

Underfunding Social Services and Tax Cuts for the 1%

We know that Ford plans to do nothing on childcare and housing. We know the meager three per cent rise in social assistance is likely to be scrapped. Hospitals, already chronically starved for funds and understaffed, will likely see more cuts. There will likely be no new money for struggling transit systems. Schools and education at all levels which need far more care and attention look to be getting a lot less. He will likely earmark the LCBO for some sort of privatization scheme. There is literally no public service or social program that will improve under Ford’s regime. He claims he will find efficiencies without jobs being lost, but his record and record of the Tories is the exact opposite.

Ford’s platform contains yet more tax cuts for business and the rich. There are tax cuts for low income earners but they come nowhere close to the handouts he is planning on giving to the rich. For low-income earners Ford plans to freeze the minimum wage at $14 offering a tax cut instead, which will leave them much worse off (full-time minimum wage workers would receive $815 a year under Ford’s plan versus $1,900 (after tax) under a $15 minimum wage).

Ford’s attacks on workers’ rights won’t just stop at a $15 minimum wage. Newly won rights like the fairer scheduling provision (which ends zero hour contracts) and gives shift workers pay for cancelled shifts are set to come into effect in January 2019. Ford is likely to stop this and rollback other elements of the Employment Standards Act like equal pay for equal work or new rules governing temp agencies. Under the last Progressive Conservative (PC) government, workers saw their employment standards gutted from head to toe. The minimum wage was frozen from 1995 to 2003, overtime rules were dramatically overhauled to favour employers, the ability to join a union was weakened, and the enforcement employment standards was non-existent. And, Ford’s election all but ensures that the 175 employment standards officers set to be hired in 2021 will not happen.

The Mike Harris years (1995 to 2002) were bad for workers and the poor all around. The Tories presided over a dramatic overhaul of the Workplace Safety and Insurance Board (WSIB) system which injured workers have yet to recover from. Social assistance was slashed and welfare recipients were demonized, the poor in this province have never recovered from the 21 per cent cut welfare rates instituted by the Harris government. Hospitals were closed and gutted, thousands of nurses lost their jobs. Education at all levels took a major hit, with workers and students paying the price for severe cuts. Tens of thousands of public sector workers were fired, while private sector workers had to go up against corporations that were backed by a ruthlessly anti-worker and anti-union government. Harris lifted the ban on scab labour, gutted regulations and gave the green light for union busting. Harris was the reverse Robin Hood, taking from the poor and workers and giving to the rich. It was class war and it had casualties, most notably when 7 people died and 2,300 were made ill from tainted drinking water in Walkerton after Harris had slashed oversight and privatized water inspection.

Doug Ford is not some new breed of Progressive Conservative. He is just the latest iteration of Harris’ “common sense revolution” – his father after all was part of the Harris government.

At city council Ford was an ardent proponent of privatization, famously saying the Fords’ would “outsource everything that isn’t nailed down.” The Fords’ privatized garbage collection in the West end of Toronto. The result has been a poorer quality service that actually costs more. Sanitation workers employed by the private companies have significantly lower wages and benefits. The only winners in the privatization scheme were Green For Life Environmental East Corporation and the bureaucrat who pushed for it. At Queen’s Park a Ford government will take his pro-privatizon ethos to new levels. The fact that Wynne and the federal Liberals are ardent backers of privatization only makes it easier for Ford to sell off public assets.

Ford is also no fan of unions. He and his brother came to power in Toronto by aiming their guns at public sector unions. With teacher union contracts coming due in two years look for Ford and the Tories to squeeze and demonize unions. Ford is also likely to rollback provisions in Bill 148 that makes it easier to keep and join a union.

His rhetoric will embolden every bigot and bully boss. Racists and misogynists will feel more empowered under a Ford government. Just look at how far the far-right is run stoking the xenophobic fears of the NDP wanting to make Ontario a sanctuary province (a reasonable policy of saying that public services should be available to those in Ontario who live here regardless of their immigration or citizenship status).

Employers will take his victory as a signal to run wild in the workplace. Ford is after all a factory owner. They know the Ministry of Labour will be less likely to enforce the scant rights workers have. Every employer will look to attack workers’ rights and paint a picture of government regulation and workplace standards as hampering the business environment.

Nationally and internationally there are stakes as well. If the Fight for $15 and Fairness victories get rolled back what message does this send to other like-minded burgeoning movements and workers across the country? Ford and Ford Nation will position themselves as the opposition to Justin Trudeau – dragging the whole national political terrain to the right. And his victory will only put wind in the sails of Trump and his far-right sympathizers across the globe.

A lot is at stake. Of course a Ford victory does not mean all hope is lost, there are really possibilities of building an effective fight back if he wins. His support is wide, but shallow. When I was out canvassing for the $15 and Fairness campaign in his riding this weekend there was sentiment that he was for the little guy against the political and economic elites. But when we drilled down into his actual positions on issues like workers’ rights and the minimum wage had little support.

The more we do over the next couple of days to galvanize support against him on the issues, to show the NDP as a real alternative the better we are prepared to take on Ford if he wins.

With the Liberals showing their true colours over the last bunch of days, attacking workers’ rights, unions and calling the NDP as bad as Ford (even running adds calling for strategic voting by Tories to beat the NDP), it is clear the Liberals are done. The choice is between Ford and his folksie factory owner rhetoric of “for the little guy” or an NDP that, while flawed, is still seen as representing the interests of workers. The former will assuredly be a boon for bosses and blow for workers, while the latter will raise expectations of workers across the province.

Over the next three days the political fight for ideas in the workplace, on the streets, at the kitchen table will set-up the struggle for the next four years. With the class choices at the ballot box clearer than they have been in a long-time, the stakes for Ontario’s workers are sky high. •

This article first published on the Rank and File website.