Punitive Austerity: Ford, the Tories and the Coming Cuts

Many Ontarians are captured by the idea of getting the same or more services for less money. But few know what the numbers might actually mean. Since Doug Ford [Leader of the Progressive Conservative Party of Ontario] did not release a clear platform, Ontarians know more about how much a beer may cost if the Conservative leader is elected than they know about how much their hospitals may be funded. This is a serious problem because the numbers that Mr. Ford has revealed are disturbing. 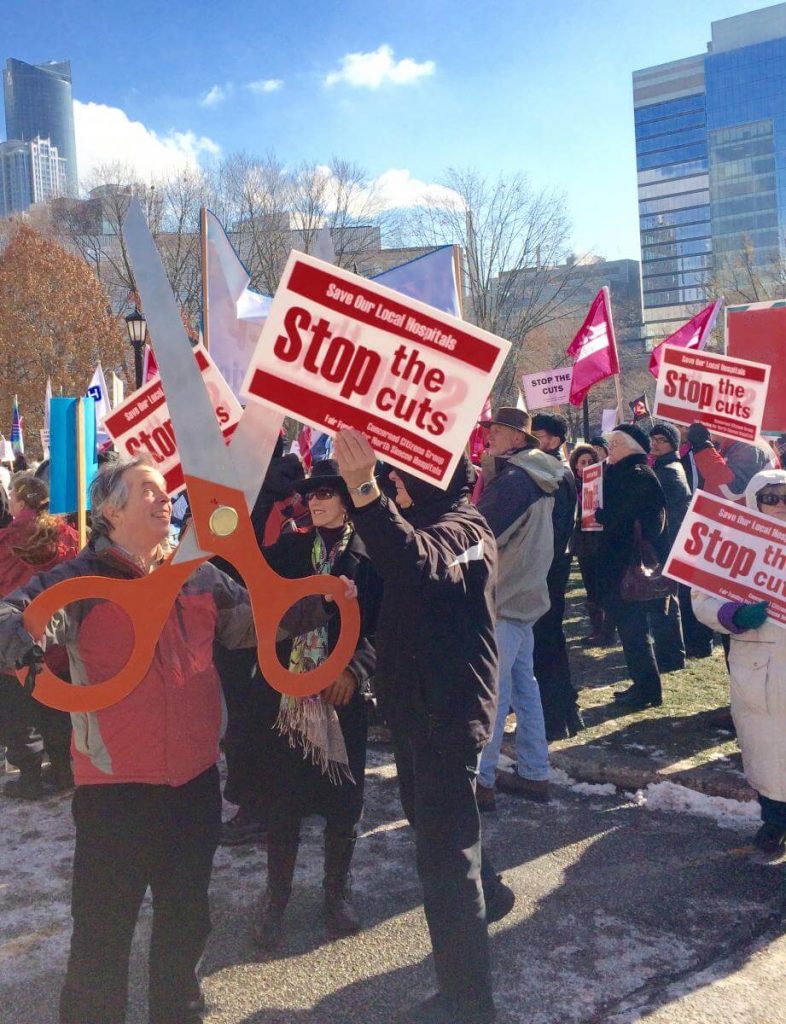 On Wednesday in a radio interview, Mr. Ford said that he was going to eliminate the provincial deficit in three years. This is on top of major revenue cuts. Mr. Ford has also pledged to cut $6-billion in public service spending through “efficiencies” over 4-years. These are big figures and Mr. Ford has not provided any details of what he plans for hospital and other vital health service funding as a result. But economists have crunched the numbers and by every tally the planned cuts amount to tens of billions of dollars. We are extremely worried.

The clearest analysis of Mr. Ford’s proposed cuts to the province’s revenues – that is the money available for funding our public services and programs – comes from Mike Moffatt, an economist at Western University. This analysis shows that, using Mr. Ford’s own concrete figures, $22-billion in cuts to provincial revenues is planned over three years.

To put this number in context, economist Hugh Mackenzie tracked the cuts during the Mike Harris/Ernie Eves era (1995 to 2003). In the first four years of the Harris government, the cumulative loss to provincial revenues used to fund public services was approx. $13-billion. The first term cuts planned by Mr. Ford are actually more than Mike Harris’. Mike Harris’ cuts added up year by year and by 2003 when the Harris/Eves government was defeated, Ontario had lost $15-billion per year in revenues that provide the funding for our public services and programs.

What does this mean for healthcare? Mr. Ford has not said where he will find the money. But we can see what happened under Mike Harris/Ernie Eves to get a sense of what it takes to eliminate billions from the budget:

Ontarians are angry about executives taking too much in salaries and golden handshakes, and rightfully so. But there is no question that a few million generated by cutting these excesses would not come anywhere near to offsetting the tens of billions of dollars in cuts that would occur if Doug Ford’s budget plan were to be imposed. In fact, the economist for the Ontario Council of Hospital Unions has totalled the impact of Mr. Ford’s plan on hospital budgets and has concluded that it would result in a cut of more than 20,250 more hospital nurses, health professionals and support staff in three years. This is equal to more than 3-million hours per year of patient care and services.

The Ontario Health Coalition is extremely concerned about the impact of these proposed cuts on healthcare. There is no doubt in our minds that this plan would mean privatization, new user fees, cuts and closures to local hospitals and community care services, and catastrophic results for patient care. We do not tell people how to vote and we do not endorse any political party. We tell the truth to our best ability and our mandate requires that we do the utmost possible to promote democratic discussion to save and improve public healthcare for the people of Ontario. Within our mandate this is what we can do: in these last few days before the election, please tell Doug Ford and his local candidates that we cannot sustain the cuts he is proposing. •