Kinder-Morgan Fiasco: The Cat Is Out of the Bag at the CPPIB

In the weeks and months ahead, there will be many political casualties of the Liberal government’s crisis surrounding the Kinder Morgan Trans Mountain Pipeline expansion. The first of these, however, was the carefully-crafted illusion that the Canada Pension Plan Investment Board’s (CPPIB) investment decisions are free from political influence. Over two decades, the Board had painstakingly constructed the pretence that Board decisions stood above retail politics. 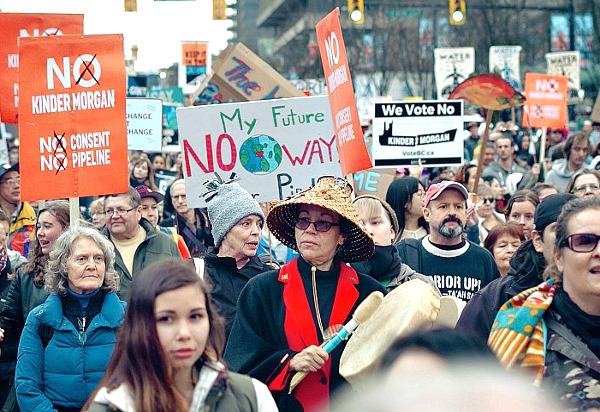 Despite occasional whispers of politically-inspired Board investments and industrial policy by stealth, the public position of the Board has been a steadfast insistence on autonomy and independence. For two decades, a parade of faith groups, trade unionists, environmentalists, and mining justice activists beat a path to 1 Queen Street East in Toronto, only to be solemnly informed that shunning tobacco, divesting from fossil fuels, and rejecting labour and human rights violators were incompatible with the CPPIB’s exclusive remit to make profits.

The Board needed only to point to its founding statute. The CPPIB Act carefully specifies that the Board is not an agent of the Crown, and that it stands at arm’s length from the Government of Canada. The Board is mandated to invest its assets with a view to achieving a maximum rate of return, without undue risk of loss, and the Board is expressly prohibited from conducting any business in a manner that is contrary to this principle.

In practice, of course, these strictures proved extremely malleable, and the Board continued to invest in a diverse group of assets offering a wide range of risk-adjusted returns. Nevertheless, the Board stuck to its narrative that the political needs of governments of the day never entered into the equation.

In mid-May, however, this pretence was laid to rest. Canada Finance Minister Bill Morneau pledged to indemnify any investor that takes over Kinder Morgan Trans Mountain pipeline expansion, and mused that pension funds might be interested if KM stepped away. The same day, CPPIB CEO Mark Machin signaled that the CPP was on board.

Now, the federal government will assume the construction risk of the Trans Mountain Expansion Project, transferring ownership to private investors once the political and first-phase uncertainties are overcome. If the CPPIB is among these investors, there will be no going back to the Board’s guise of a politically-independent global investor.

Since its inception, the CPPIB has been intensely sensitive to the political winds blowing from Ottawa and provincial capitals. What’s changed is that the federal government has embarked on seriously courting pension fund investment. Like many governments around the world, Canada’s response has been to keep public investment carefully limited, while expanding opportunities for private capital to invest. The Liberal’s ‘Bank of Privatization’, the Canada Infrastructure Bank, was conceived precisely to attract Canadian and international pension funds to large-scale infrastructure projects. In practice, this has proved exceedingly difficult in the United Kingdom, the United States, and other countries. Where pension funds and large investors can be persuaded to join in, the result will be far more expensive projects with higher long-term costs to public finances.

In our view, trade unions and the Left should seize on this opportunity by demanding much more than elaborate trappings of socially-responsible investment criteria in Board decision-making. Instead, the Left needs to think much more ambitiously about ways to harness pension funds for democratically-controlled social investment, for several reasons.

First, Canada is not on track to meet even its modest climate commitments made in Paris. Far more ambitious investments in renewable energy, energy conservation, and electrified transit are needed to significantly reduce emissions by mid-century. Hoping that a mix of carbon taxes and inducements will spur private investors to lead this transition is pure fantasy. A major program of public investment is necessary if we are to speed decarbonization, creating decent jobs and reversing insecurity and inequality in the process.

Second, underinvestment in public infrastructure in recent decades is unmistakable. Municipal infrastructure is decaying; transit systems and libraries are shamefully under-resourced; and public housing nearly everywhere is scarce and in disrepair. Hospitals and long-term care need significant investments, and northern and remote communities have vast unmet energy, water and health needs. Canada beyond Quebec continues to have no universal child care system. As even bourgeois economists have been insisting, public infrastructure investments are more likely than ever to pay off in creating jobs and incomes, reducing poverty and improving public health, to say nothing of stimulating productivity growth and private investment. 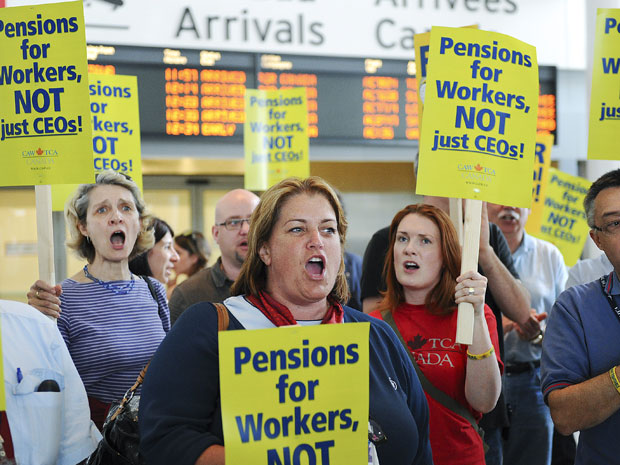 One solution would be to propose a conditional levy on pension surpluses to finance a fund for economic renewal. This fund could be bankrolled simply through funding excesses generated by pension plans like the CPP. The existing CPP remains a largely pay-as-you-go plan, with current contributions funding current benefits. Since 1997, however, higher contributions have allowed the CPP reserve fund, managed by the CPPIB, to grow to over $350-billion today, before swelling to a projected $6.7-trillion in 2090. Since it began in 1997, the CPPIB’s average return on CPP assets has been well above the necessary minimum long-run real rate of return; current assets are one-third again greater than was projected just ten years ago. Tapping only funding excesses in the CPP would preserve benefit security and leave plan provisions unchanged.

How might a fund for economic renewal work? It could distribute funds to regional sub-funds overseen by local community groups, unions, community economic development associations. Residents could identify urgent local needs – childcare, or school renovations, hospital beds or community care facilities. Investments in basic skills, on-the-job training and apprenticeships would aim at maximizing local employment benefits and developing capacities, especially among disadvantaged groups. Economic renewal funds could be supported by federal, provincial/territorial and municipal investment. A portion of returns on specific investments, for instance from rents on social housing, would flow back to the pension fund.

Nor should a pension levy to support economic development be restricted to the CPP fund (or the Quebec Pension Plan fund in that province). Large public-sector workplace plans in Canada, many of which deliver consistently-high returns and are in positions of funding excesses, should also be levied. These plans hugely benefit from large public subsidies. Canada has by far the greatest tax breaks for private pensions in the OECD. In 2013, Canada reported spending 2.0% of GDP on tax breaks for workplace plans, five times the OECD average. Imposing a levy on workplace plans in the service of social investment could reduce some of the resentment of public-sector pensions, while leaving benefit security untouched.

With the Kinder Morgan fiasco, the Liberal government has spilled the beans about the CPPIB, and reminded the Left to think ambitiously and creatively about socializing investment. Let’s seize the chance. •

Bob Farkas is a teacher, union member, and activist living in Toronto, Canada, with a longstanding interest in pension issues.