The 2017 British general election has generated the beginnings of a qualitative-change in the relationship between the Labour Party, much of British society, and parliament. That transformation can be understood as the emergence of a permanent reformation. 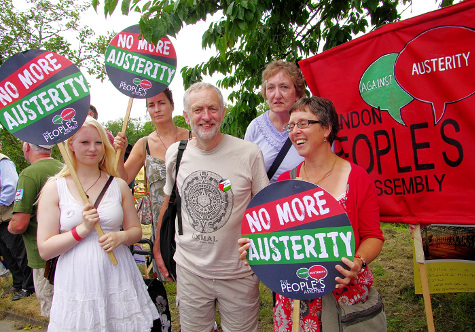 Labour’s much better-than expected support raises the distinct possibility of its victory in the next election. Against all the odds – the polls, the hostile right-wing press, expectations within the Labour Party itself – Jeremy Corbyn led the party through a brilliantly coordinated campaign, presided over the biggest swing to Labour since the earth-shaking 1945 general election, and placed socialist ideas firmly back on the political agenda.

The significance of the Labour surge is not, primarily, a question of a shift in the balance of political power in parliament. It is much more profound than that. Labour’s campaign let the proverbial genie of class politics out of the bottle.

The Genie of Class Politics

For decades that genie has been kept prisoner. First, under Margaret Thatcher’s momentous attack upon the trade union movement and her declaration that there was “no such thing as society.” Second, under Tony Blair’s third way progressive policies were framed as benign gifts to the poor, to be delivered in a context where Labour was, in Peter Mandelson’s infamous words, “intensely relaxed about people getting filthy rich.” Blair’s New Labour discouraged any revival of working class militancy. For example, he famously opposed and beat back the Fire-Fighter’s strike for a 30K a year wage. Thirdly, following David Cameron’s Conservative-led coalition, austerity was imposed with a vengeance, with working class communities bearing the brunt.

During the election campaign Corbyn was relentless in his critique of the wealth-gap in the UK. The campaign gave confidence to the millions of people, who voted Labour, that an alternative to austerity is possible.

While the Tories won the election, Theresa May’s authority is shattered, and the Tories are weakened. But, whenever the next election comes, the Tories will be much better prepared. They will, in all probability, have replaced May with a leader who can communicate effectively with the press and public. They will have a fully costed Manifesto. Their attacks on Labour will be sharper and better coordinated. So what about Labour?

Labour’s result has put Corbyn firmly at the head of the party for the foreseeable future. The key dynamic is not, however, within the parliamentary Labour Party. It is among the party’s 500,000+ membership and its support base.

The hung parliament represents a breathing space for Labour, and a chance for it to consolidate, build upon, and strengthen its base. A core ingredient of Labour’s victory was the unprecedented volunteer mobilization across the country to campaign and canvass for the party. While the hugely successful Bernie Sander’s campaign was built over two years, Labour’s election campaign was put into action over less than two months.

The question is, how can Labour increase the momentum of this campaign so that it can prevail when it faces a better-organized Tory party at the next election?

There are a number of things that Labour can do. First, it must continue to increase its membership base. Given the success of the campaign it is not unrealistic to aim for a membership of 1 or even 2 million people. Members should be encouraged to contribute financially to the party. A 1 or 2 million-strong party, with each member contributing £10 a month, would generate the new-found resources with which to finance its momentum.

Secondly, membership and support for the party cannot be based, simply, on the electoral cycle. The culture-ideology of neoliberalism – self-seeking individualism – has sunk deep roots in the UK (and across much of the world). Labour needs to help generate a counter-culture of solidarity and community to combat neoliberal ideology. A mass, subs-paying membership, can contribute to financing a counter-cultural movement. Labour Party branch meetings will, quite obviously, be a place to discuss local and national politics. But they must be so much more. Tens of thousands of artists, intellectuals, and musicians support Labour. Branch meetings can be a place for a counter-cultural flowering, where members and supporters can meet. Well-financed local Labour parties can support myriad cultural events (for example, showing films such as “I Daniel Blake” with discussions).

Thirdly, Labour must engage in an ideological insurgency. The Tory mantra during the election was that Labour are fiscally irresponsible and that there is ‘no magic money tree’ to pay for Labour’s projects. Let us leave aside that, in response to the global financial crisis, the Bank of England and the UK Treasury collaborated to create £375-billion of new money through quantitative easing. There is a real need for something approaching a Labour Party membership and supporter education which explains the rationale of alternative economic and social policies.

Fourthly, there is a need for a combination of defensive and offensive campaigning, at the local and national level. Defensive campaigns will range across issues such as defending the National Health Service (NHS) and schools against cuts and privatization. Offensive campaigns will probably include those to reinstate free education, to cease arms-sales to dictatorships (such as Saudi Arabia) to protect the environment, and ensure clean air for all. Given the Tory party austerity-addiction and their desire to privatize everything in sight, these campaigns will, more likely than not, be permanent as long as the Tories are in power.

Fifthly, and crucially, struggles and strikes by workers need to be supported and stimulated. Theresa May leads the weakest Tory party government since the Edward Heath government in the early 1970s. Strikes will not only contribute to weakening it further, but can also be part of the generation of a solidarity-based counter-culture.

The Labour Party sees itself as a family. The massive surge in support for it during the election represents the political crystallization of the yearning for a
different form of government, democracy and society. The five points above could represent the first steps of Labour’s permanent reformation. When it gains political office that reformation will need to be ramped up all the more. •