In the Globe and Mail this weekend, physicians who are extra-billing patients for services at private clinics justified themselves by complaining that they cannot get operating room time and waits are too long in the public system. 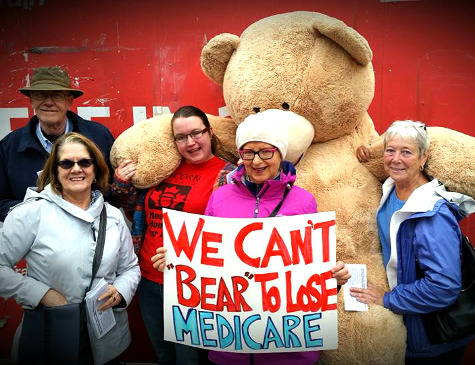 At the Ontario Health Coalition, we have been advocating for 10-years to stop the cuts and reinvest in our public hospitals. We have led this fight, which we know is overwhelmingly supported by the public. But in all these years of advocating to save and improve services in our public hospitals, the private clinic owners that are justifying their extra-billing of patients by complaining about access to operating room time have been nowhere in sight. They have not joined in the fight to save local hospitals from closure, I have not seen them advocating to improve public hospital funding, to build public capacity, nor to ensure that funding goes to care.

For two decades, pro-privatization pundits, clinic owners and politicians claimed that it doesn’t matter if services are owned and controlled by for-profit entities or public and non-profit hospitals. Private clinics, they promised, would exist under Canada’s public medicare laws without causing harm. They would, on every occasion, avow that private clinics are beneficent and healthcare would not rely on your credit card.

They were not telling the truth. Over the two decades or more in which Canadian provinces have experimented with privatization, the attempt to regulate private clinics has failed. Illegal billing, double-billing and quality problems have become widespread. The clinics are violating the laws of Canada and the provinces as a business model because doing so increases their (already substantial) incomes and profits.

The evidence is indisputable. In 2008, we called every private clinic in Canada. We researched and wrote a report Eroding Public Medicare: Lessons and Consequences of For-Profit Health Care Across Canada. In it, we published the notes from our calls with the private clinics, showing that the vast majority were violating the Canada Health Act. Again in 2014, we called all the private clinics in Ontario, and we found that the clinics continued to break Canada’s medicare laws. If anything, the majority of clinics had become more manipulative and unethical in the information that they were giving to patients to “sell-up” medically unnecessary add ons.

Physicians, nurses and health professionals from Saskatchewan, Ontario and Quebec have organized themselves to ask governments to stop privatization on behalf of their patients. Almost half-a-million patients in Quebec filed a petition with the federal court to force the Health Minister to uphold Canada’s medicare laws and stop the burgeoning user fees charged at private clinics in that province. Now, we have released our latest surveys of 136 clinics and 400 patients that again proves that the transgressions are not the exception among private clinics… they are the rule and they are causing hardship for patients.

Now that the private clinic owners are caught breaking the laws that they said they would not threaten, they want politicians to legalize their illegal activities and simply regulate extra-billing. So far, the record on regulation is abysmal.

Private clinics are using failures in public policy as cover for their unethical behaviour. But their critique of what is happening in our public system is not entirely wrong. The solution is not to throw out public medicare and the protections against user fees and financial hardship that it affords to patients. The solution is to open unused capacity in our public operating rooms and diagnostic suites, use sound population planning processes to plan public hospital capacity to meet our communities’ needs, adopt innovations in wait time management and the organization of services to improve access, and roll contracts back in to our local public hospitals.

Privatization is a failure. It’s time to rebuild capacity in our community hospitals that operate on a non-profit basis in the public interest and insist that our governments plan for and resource our public hospitals to provide the services we need.

A special thank you to all of you who answered surveys and distributed them to your contacts. Together, I know that we can protect public healthcare, based on the principles of equity and compassion for all Canadians. •

Surveys of hundreds of private health clinics and patients reveal that extra user-fees amounting to hundreds or even thousands of dollars are threatening access to healthcare and hurting patients, and Canada’s governments are doing too little to stop it. A new cross-Canada study “Private Clinics and the Threat to Public Medicare in Canada,” includes the results of surveys of 136 private hospital, diagnostic and ‘boutique’ physician clinics across Canada and with almost 400 individual patients. Both clinics and patients were asked about extra user-charges for needed healthcare services. Under the Canada Health Act such user fees are forbidden. But the Health Coalition found evidence that at least 88 clinics in six provinces are charging extra user-fees. Two-hundred and fifty patients detailed instances in which they have been charged for care.

Health Coalitions and public-interest advocates across Canada are warning that challenges to public healthcare posed by private clinics have come to a head, and unless governments act to protect patients, public healthcare is at risk. Two major legal actions have been launched from opposite sides of the country: in British Columbia, private clinics have brought a charter challenge to dismantle legal prohibitions on extra billing, user fees and private insurance. In Quebec almost half-a-million seniors petitioned the federal court to force the Federal Health Minister to stop burgeoning user fees. At the same time, Saskatchewan’s government passed legislation to bring in two-tier healthcare in flagrant opposition to the Canada Health Act.

“As private clinics have moved in and taken over services provided by our public hospitals, they have bolstered their owners’ incomes and profits by charging extra user fees to patients amounting to hundreds or even thousands of dollars,” explained Natalie Mehra, executive director of the Ontario Health Coalition and the report’s author. “We found that the majority of private clinics are charging extra user fees to patients, with many also billing the public health system. We found that costs for patients in the private clinics are exorbitant – up to five times or more than those in the public system.”

“As a result of extra charges for healthcare, patients described running short on rent, using a significant amount of their pension, forgoing groceries, and finding themselves unable to buy things for their families,” she reported. “The stories are shocking. It is unacceptable that patients are manipulated into paying outrageous prices for healthcare when they have already paid in their taxes. Healthcare should be based on need, not wealth. This is the cornerstone principle of public healthcare and it has come under threat.”

“Under Canada’s Public Medicare system, provinces are required to protect patients against unlawful user charges and extra-billing,” said Adrienne Silnicki, national coordinator of the Canadian Health Coalition. “The federal government is obligated to uphold the law and has the power to penalize provinces that fail to comply. Both levels of government also have an obligation to provide needed hospital and physician care to meet our communities’ needs. But they are failing to do so.”

The coalitions are calling for: