From the World Social Forum to the Arab Revolts

Tunisia, cradle of the revolts in the Arab world, hosts from today [26 March] and until Saturday the World Social Forum (WSF), the most important international meeting of social movements and organizations. And this is not by chance. The promoters of the WSF chose this country in reference to the ‘Arab Spring.’ The latter has not only given rise to new movements of opposition in North Africa and the Middle East, but has also ‘contaminated’ the south of Europe, in particular with the movement of the indignant in the Spanish State, as well as the Occupy movement in the United States. 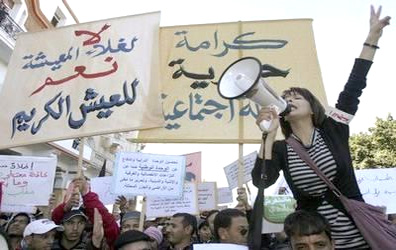 It is a new cycle of protest which has emerged on an international scale, determined by a systemic crisis of debt and austerity policies, in particular in the countries of the periphery of the European Union subjected to harsh measures of adjustment.

The ‘Arab Spring’ brought a fresh wind in the long night of the crisis. It made it possible to recover confidence in collective action, in us. In January 2011, Tunisian president Ben Ali fled the country under the pressure of the street. One month later, in February 2011, history was repeated; Egyptian president Hosni Mubarak threw in the towel and resigned, forced and constrained by social mobilization. The Arab world, so long stigmatized in the West, offered a lesson of democracy to us.

Today, two years later, the World Social Forum is being held in the epicentre of these revolts, where it encounters political processes of open, unstable and chaotic change. In Tunisia, last February, the assassination of Chokri Belaïd marked a turning point. A lawyer and militant Marxist, he was one of the leaders of a Popular Front which brings together various left organizations which assert in their programme not only more democracy, but also social justice. The first political assassination of the young Tunisian democracy represented a hard blow for society and started new mobilizations against the rise of violence in the country.

Both in Tunisia and in Egypt, the revolutionary processes which have emerged are today still open, but their outcome remains dubious. The democratic conquests are fragile and still limited and there have not yet been significant economic changes. An open fight is going on between those who consider that the revolution is finished and those who want to deepen it and to carry it through until its ultimate consequences. The youth and left activists show daily that they are not going to let anyone confiscate their revolution, whether it is the vestiges of the old regime or the Islamists who have come to power.

Beyond the debate on the situation of the ‘Arab Spring,’ to which all the seminars and the activities of the second day of the WSF are devoted, other themes will have a particular centrality. The feminist struggle, for example, with the assembly of women, right before the beginning of the WSF, which will be devoted partly to the analysis and the sharing of experiences on the important part played by women in the Arab revolts, as depicted by Leil-Zahra in her documentary series “Words of Women from the Egyptian Revolution.” The international movement for climatic justice will organize a “Climate Space” within the WSF in order to discuss its future strategies, convergences and prospects on a key question for the future of the planet and humanity.

Since the World Social Forum organized its first meeting in January 2001, at the same time as the celebration of the World Economic Forum of Davos and as a counterpoint to the latter, much water has passed under the bridge. The WSF was born from the movement against capitalist globalization, later converted into the anti-war movement, and as a meeting point for a new total resistance against the disasters of neoliberal globalization. After having played an important part in struggles during its early meetings, it lost its political centrality in spite of a continuing high participation and it gradually died out in parallel with the movement against capitalist globalization. The context had changed and, consequently, so had its raison d’être.

“The movements are faced with the challenge of creating new space of articulation on the world scale allowing advance in the common struggle and the exchange of experiences.”

Today, with the opening of a new cycle of protests born following the ‘Arab Spring,’ with the movements of the indignant and Occupy, the World Social Forum is perceived to some extent much more as an instrument of the past than of the present and the future. But its existence highlights one of the main weaknesses of the new social movements of protest which have appeared in the context of the systemic crisis: their fragile international coordination. The movements are faced with the challenge of creating new space of articulation on the world scale allowing advance in the common struggle and the exchange of experiences. The offensive of austerity policies in all countries is truly intense and requires such an effort of national mobilization that external coordination is weakened. Although these new movements feel themselves part of the same global wave, coordination between the different actors of the movement has remained rather weak, despite the organization of global days of action and some meetings.

Currently the axis of mobilization is no longer in Latin America, where the WSF was born. It is now in the Arab world and in an old Europe boiling with protest and ‘third worldized’ as it is struck by crisis. The challenge now is to learn from these struggles which in the not so distant past have emerged against debt, evictions and privatization in the countries of the South. And to advance toward the indispensable coordination of resistance which can face up to the implacable organization of capital. •

This article first appeared at esthervivas.com.