It’s Time to Decide: The Left, Austerity, and the People’s Assembly

The Peoples’ Assembly will meet in London on June 22, where thousands of those opposing the Coalition’s cuts will gather to work out a strategy to defeat austerity, and by implication, the government. Waiting till a 2015 election is hardly an option. It would be to allow more irreparable damage to be done. And many people, way beyond the radical left, will be wary of assuming that an Ed Miliband government, without strong pressure from below, will do much to alleviate the collective suffering caused by austerity. 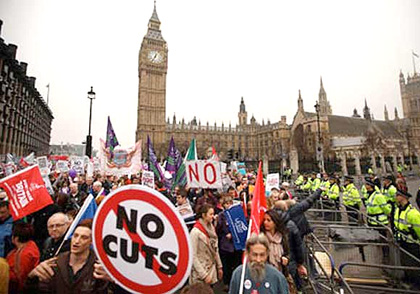 This project has to be priority number one for socialists. It’s a standing rebuke to the left that five years into a catastrophic crisis we haven’t managed to launch a co-ordinated challenge to this rich man’s government. Now we have the opportunity, and we must take it. The left can only become relevant by showing that it can make a difference in the real world, that it can provide some hope.

Going On to the Attack

There has of course already been substantial opposition to the cuts. The students moved into action first, against fees in late 2010. They were soon followed by public sector trade unionists, who organized co-ordinated strikes and marches to defend pensions in June 2011 and November 2011. Local and single issue campaigns have sprung up to defend hospitals, end attacks on people with disabilities, and to keep libraries, swimming pools and drop-in centres open. Occupy and UK Uncut have captured and lifted the mood of defiance. The TUC has called and carried off two demonstrations of a size not seen since the great anti-war demos of 2003. After a lull that lasted much of last year, opposition to the government’s plans is rising again with NHS demos growing, the bedroom tax protests taking off, and now a new round of strikes called by the NUT and the PCS.

Suddenly the government looks not just nasty, but fractured. Ministers have made concessions on NHS reform and the Bedroom Tax. There is talk of a leadership challenge to David Cameron. The polls have swung decisively against austerity. The Coalition is clearly vulnerable and now is a good moment to go on the offensive. But this is our central problem: until now we haven’t been able to conjure up a movement capable of a frontal assault.

The Local and the National

Local campaigns and sectional struggles are essential. They draw people into action, creating new networks and new militants. Even small victories have a multiplier effect and chip away at peoples’ sense of helplessness. But the simple reality is that austerity is being co-ordinated nationally (and to some extent internationally) – not locally.

However wrongheaded, austerity is not a casual project or an ad hoc response to a temporary problem. The current assault on the welfare state, on wages, on pensions, and on the NHS, is an accelerated phase of a thirty year project to break up the post-war settlement and rebalance society in favour of the rich. We need to match the national scale and the grand ambition of our adversaries.

Impressive local mobilizations show the anger is there. We have the arguments, the numbers, and the moral high ground, but we need to turn these things in to a concerted, national movement. This means overcoming fragmentation. The Peoples’ Assembly on June 22 is designed to do just that. Crucially it offers the first major opportunity we have had to bring together serious delegations of workers with the wider movement.

It’s already taking off. Seven national unions, pensioners groups, Keep Our NHS Public, The Peoples’ Charter, Disabled People Against the Cuts, student unions around the country and many, many more are already signed up to the Assembly and are sending delegates. The aim must be to have representation from local anti-cuts campaigns, union branches, community groups – from every section of society that is suffering.

The ABC of the United Front

But we also have to create a movement that looks serious enough to attract people from way beyond the activist world who are turning against the government. The reason is simple. If we don’t manage this, we lose.

“We have to challenge the culture of sectarian position-taking which has become so prevalent.”

This is why, when it comes to the movement, we have to challenge the culture of sectarian position-taking which has become so prevalent. Left activists certainly need to come together in socialist organizations to clarify ideas and strategy. But we will not reach the vast majority of people through propaganda or slogans alone, and we won’t move them any closer to socialist organization.

The first step to popular radicalization is mass activity. People have all sorts of mixed ideas in their heads when they first start to question things. This is especially true now when the left is relatively weak. Any movement of resistance that doesn’t unite socialists and other radicals with people who regard themselves as more mainstream is going nowhere. As the movement develops different approaches will be discussed and tested, but the crucial issue at stake is to create a movement that welcomes people who never dreamed they would be taking to the streets.

Anyone who opposes the cuts should be in. To get them in we need the support and involvement of the biggest most influential and most representative organizations in the movement – particularly the trade unions. We also need platforms that represent the politics of the movement – where people are at – rather than where others think the movement should be. We need union leaders, anti-austerity MPs, high-profile writers and journalists as well as leading campaigners and radicals speaking out. If you want to be broad at the base, you have to be broad at the top. Why? For the simple reason that as long as millions of rank and file workers support Tony Benn or Len McClusky, or even Dave Prentis, they are more likely to mobilize and take action if the call comes from them and not just from the far left. This is the ABC of the united front.

The need for a left electoral project is also being discussed. This is an important aim. It is obvious that some kind of left formation is needed to challenge a Labour Party that has signally failed to challenge the politics of austerity. But experience, both here and in Europe, shows that the successful launch of such a venture normally depends on favourable wider developments. Die Linke in Germany and the Front de Gauche in France both came out of the fusion of radical organizations and important splits from social democratic organizations like the Labour Party. Both involved high profile figures as part of that process.

The other factor that can hasten a serious regroupment of the left is a resurgence of mass struggle. Respect, the nearest we have got here to success in such a project, was given its impetus by the massive upsurge of the anti-war movement, as well as the related expulsion of George Galloway from the Labour Party

Unity of those on the left who want to fight is most likely to be achieved in action.

In a situation as acute as the one we are now in, left revival looks remote if we don’t organize effective resistance. There are a series of urgent, immediate questions that face people: how can we save the NHS? How can we defend our services from devastation? How can we protect desperately vulnerable people from the ravages of the cuts? How, in short, can we can we check the momentum of an elite that wants to re-engineer our whole society?

So what is the strategy? This will need discussing at the Assembly and at the scores of meetings taking place in the run up to it. But two things need to borne in mind if we are serious about winning. We will clearly need to be more militant to be effective, but we will also have to popular. In a period like the present being popular and radical is possible, but to achieve it is an art.

Anyone can get a cheer in a room full of activists for this or that demand. But the question to consider and discuss first is whether the action being proposed can actually be pulled off, and if it can, whether it will increase confidence, bring new people the movement, maintain unity and so on.

Co-ordinating strike action against austerity should be one central aim of the movement. We have, though, to be realistic about the state of trade union organization, particularly in the private sector. Recent international experience suggests that it is through the development of the wider movement that people gain the confidence to take strike action. If the assembly manages to bring the movement and organized workers, then together, the next step could be to do the same in the streets – a day that combines protest action and strike action, a day that really could express the rage that is building.

Whatever action we call, it will be of a different order because it has been launched by a body that unites the whole of the movement. It will draw on the synergy of workers and students, Occupy and the unemployed, artists and disabled people and all the other campaigns and networks committing to work and struggle together. And whatever other plans it comes up with, one aim must be to call Peoples’ Assemblies in every town and city. This in itself would be a huge step forward, allowing for local co-operation and planning, but also for ongoing national co-ordination.

The crucial next step to radical unity at the moment is to pull together all those who want to fight the government, whether they are inside or outside Labour. That means throwing ourselves in to building a real movement with real people and in the process testing our ideas – even (god forbid) modify them – in a real battle. This can open up all sorts of new possibilities. It might make a real difference to the world. It might even bring down the government. What do you say? •

This article first appeared on www.counterfire.org.

Chris Nineham is a founding member and National Officer of the Stop the War Coalition.