A Critical Week for the World Social Forum

It all began right here in Porto Alegre in 2001 when this city in the south of Brazil became a major site of popular mobilization. Influenced by the Workers’ Party (PT), unions were, along with popular movements, at the forefront of a proactive political effort that included the support of the left within the Catholic Church, inspired by liberation theology. In the neighborhoods and slums, tightly-knit networks were struggling to take over the city while testing and implementing new ways of governance. In 2002, a seismic shift occurred with the election of a working-class president from northeast Brazil, the poorest part of the country. At the same time, a strong wave of mobilization was sweeping Argentina, Ecuador, Venezuela, as well as Bolivia, where an unprecedented indigenous movement had taken center stage. 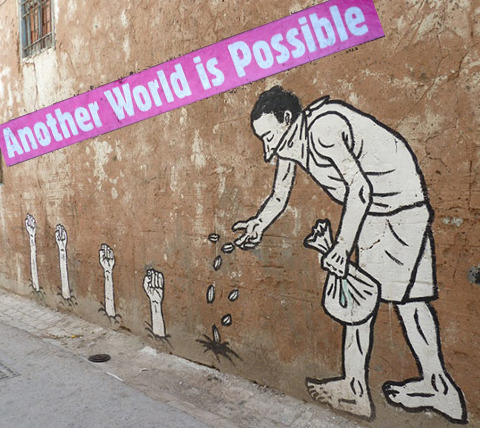 It was within this new constellation of resistance and the building of alternatives that a small group of Brazilians, with the help of a number of South American, European and even Quebec organizations, launched the idea of the creation of a large forum for debate: a “new” space, unconstrained by the imposition of a “correct” line. It was rather to be a space where we could see and hear in new ways and imagine a radically different world, in a radical counterpoint to the yearly gathering of the rich and powerful in Davos at the World Economic Forum.

Before we were really fully aware of what was happening, the movements had rallied thousands of people, then tens of thousands – and the numbers continued to grow. For the first few years it seemed best to continue the work of the Forum here in Brazil, just as it later made sense to internationalize the Forum by organizing meetings in Asia, Africa, Europe, and the Americas. While at the outset it was an annual event, the World Social Forum (WSF) evolved into a galaxy of thematic, regional and local forums. At the beginning of the present decade, the Forum “formula” served as an inspiration (without directly creating or controlling them) for the series of popular political “Springs,” including the Occupy and the Indignados mobilizations at a time when the movements of movements had decided to challenge neoliberalism, war and the denial of fundamental rights. The World Social Forum of Tunis in 2013 was a stellar example of this fightback.

The 1% Ramp Up Austerity

The elites did not remain passive when faced with this rising tide of popular resistance. Neoliberalism reacted by ramping up austerity policies, slashing employment and continuing policies of privatization. The 1% showed little hesitation about reverting to the time-tested tools of authoritarianism, racism and militarism. Popular movements were forced to retreat in the ideological arena, which opened the door to certain reactionary currents that, at times, would use religion as a cover for their efforts.

At the same time, democratic governments, confronted by the shadowy maneuverings of a financialized capitalism, still clung to the illusion of their own capacities to deal with the crises while distancing themselves from popular movements. Even while opposing certain practices of globalized capitalism, these institutional players were unable to build a powerful enough counter-hegemonic force. For example, on the crucial question of the environment, center-left governments remained very tentative, tolerating an extractivist approach to the exploitation of natural resources and supporting related megaprojects, while lacking any serious plan to rethink overall development. This crisis allowed the political operatives of the right and of the extreme right to take advantage of this turmoil and disarray as well as of the divisions within movements, as seen most recently in Brazil and Argentina.

New Challenges for the WSF

This state of affairs is at the center of debates the world over. And this constitutes a new challenge for the WSF. How does the Forum remain relevant and important in a context where we must, perhaps more so than ever, find common pathways forward?!

For some, it’s a matter of returning to more traditional ways of uniting the movements under the direction of an enlightened avant-garde and, following the model of the Internationals of yesteryear, creating a “Central Committee” capable of “taking” power and then eventually seeing to its transformation. This vision harkens back to an old-style “Left” but at least it is an attempt to propose an overall plan and doesn’t pretend that nothing is amiss.

Another option obscures or minimizes the current shift and seeks refuge in the dream of “local self-management” and “alternative” experiments. This requires that one distance oneself from power, from the State, and governing, conscious that (and this is an important and legitimate idea) power is not a “thing” – the property of a gang of thieves – but rather a complex social relationship; an “apparatus,” to use Foucault’s term.

Between these two polar positions exists an array of hybrid forms, as found in Bolivia or Spain where movements, with no illusions, decided to become involved in their respective political milieus while still working toward strengthening popular initiatives.

First of all, for the Forum to continue it must be a space where we come together above and beyond our differences. This is a matter of a “common sense” approach necessary to fight back against the current right-wing assault.

But it’s also a matter of a political and ethical commitment of everyone getting out from under their own “bubble,” in order to learn from others and to innovate. The Forum must not become a new “International” but it must create space (a lot of it) both to build alliances and to avoid the “magical thinking” where we abstain from, in the name of “horizontality,” engaging in analytical efforts that could lead to attempts to build counter-hegemonic alternatives. It makes no sense to focus solely on the processes of the available political space just as it is an error to imagine that a “new” world will emerge solely from micro-projects and local initiatives.

All these questions will be on the table this week here at Porto Alegre as part of the Forum of Resistances organized by the South American groups who are clearly cognizant of the gravity of the situation. At the end of the week there will be a meeting of the International Council, a grouping whose function is somewhat ambiguous and even called into question by some, but nevertheless has a mandate to facilitate the decision-making process.