Land For Those Who Work It

The land is a source of wealth for a few, here and on the other side of the planet. In the Spanish State, the housing boom has left a legacy of ruinous urban development, airports (almost) without airplanes, ghost towns, huge, obsolete infrastructure projects… And in the global South, the desire to profit from the land has driven off peasants and indigenous peoples, and imposed monocultures for export, large infrastructures for the exclusive benefit of capital and the plundering of their natural resources. 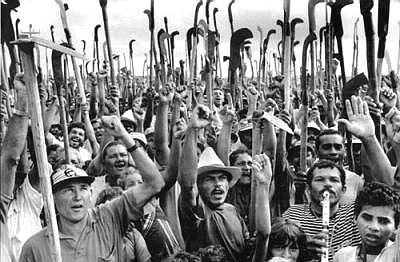 The oligarchy in power takes advantage and pulls the strings behind the scenes, negotiating shady urban development deals, redefining rural land to allow it to be used for construction. Corruption cases are multiplying. The culture of backhanders is the order of the day. So is a new despotism by big business at the expense of citizens and our territory. And elsewhere, history repeats itself. Corrupt governments are the best partner for investors who want to acquire land quickly and cheaply. According to an Oxfam report, every six days overseas investors sold an area equivalent to the size of the city of London. It is the fever of the land.

Privatization and land grabbing are the order of the day. What’s more beneficial than what we need to live and eat? The food and financial crisis, which erupted in 2008, gave rise, as has been well documented by the international organization GRAIN, to a new cycle of land grabbing on a global scale. Governments of countries dependent on food imports, in order to ensure the production of food beyond their borders for their own population, as well as agribusiness and investors (pension funds, banks), hungry for new and profitable investments, have acquired fertile lands in the South. It is a dynamic that threatens farming and food security in these countries.

Indigenous people, driven from their territories, are spearheading the fight against the privatization of the land. This is not a new struggle – and is one that was spearheaded by Chico Mendes, rubber tapper, known for his fight in defence of the Amazon and who was murdered in 1988 by Brazilian landowners. Chico Mendes helped create the Alliance of the Peoples of the Forest, comprising indigenous peoples, rubber tappers, environmentalists, farmers … against multinationals demanded logging and land reform with communal land ownership and its use for the benefit of farm worker families. As he said: “There is no defence of the forest without the defence of the people of the forest.”

Here in the Spanish State, the Union of Agricultural Workers (SOC), part of the Andalusian Workers Union (SAT) has been one of the key exponents in the struggle for land and the rights of farm labourers. For over a year, they have occupied and worked the farm of Somonte, in Palma del Río, in the southern Córdoba province, that the regional government of Andalusia was preparing to sell, even though 1,700 people in the small town are unemployed. The aim of the occupiers is that this farm is worked by cooperatives of the unemployed, rather than pass into the hands of bankers and landowners. Somonte is a symbol of the struggle of the SOC and the SAT, which is involved in similar efforts elsewhere.

In Catalonia, today, a clear example of how the use of land to private interests take precedence over the social and the collective is Can Piella, a seventeenth century farmhouse with land attached that is one of the few remaining rural areas in metropolitan Barcelona. After being abandoned for ten years it was taken over by a group of youths. They created an association, which currently has about two thousand members, who have restored the property, resumed farming, revitalized the surrounding environment and opened it up to people living in the surrounding areas of Llagosta, Santa Perpetua de Mogoda and Montcada i Reixac. Now, after three and a half years of operation, an eviction order threatens the project. The owners who for a decade abandoned the finca and have no plans for it, now claim it back.

In the early twentieth century, Emiliano Zapata, peasant and leading figure in the Mexican Revolution, demanded: “Land for those who work it.” It has been over one hundred years and this continues to be a topical slogan. •

This article first appeared at esthervivas.com.