Toward a Social Strike

The student revolt that has been shaking the Quebec state, has been captivating activists across Canada and the world. Coalition large de l’association pour une solidarité syndicale étudiante (CLASSE) is the major component of the coalition of student unions leading the strike of some 180,000 students out on strike. It is said to represent about half of the coalition. The Liberal government of Quebec Prime Minister Jean Charest has refused to negotiate over the course of the strike; in the last days, he has been offering a phase-in of the tuition increase over a longer period. He has also been offering the iron fist of the state with increased use of police intimidation, detainment, security harassment and violence. Students have met the violence, of both the neoliberal policies and the state, with ever more innovative tactics, fiercer commitment and impressive nightly demonstrations.

The CLASSE and the wider student movement are now calling for a wider social strike. This challenges, in particular, the Quebec (and Canadian) union movement, as well as other movements and sectors, to join in the rejection of neoliberalism, and move toward a ‘social strike’ against the Charest government.

Presented here is the statement of CLASSE, translated by Richard Fidler, for a social strike.

Toward a Social Strike

Hike in tuition fees is part of “the cultural revolution”

For several weeks now a student revolt has shaken the neoliberal consensus imposed for many years by the Quebec and Canadian governments. It was sparked by the announcement of a new, 75 per cent increase in university tuition fees. 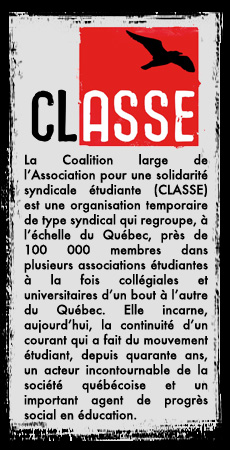 Since its announcement in the 2010 Quebec budget, the media lackeys of the Liberal government have attempted to present this measure as inevitable. But behind this claimed inevitability we find an eminently political decision expressed in what the finance minister terms a “cultural revolution,” and the international economic authorities refer to as an “austerity budget.” Whatever the name given to it by governments, it clearly and definitively involves the dismantling of public services aimed at privatizing what remains of the commons.

The student movement has focused on the issue of tuition fees and the commodification of the universities. However, it is not unaware that this measure is integrally linked to a larger project affecting elementary and secondary education, the healthcare sector and the unfettered development of natural resources. Our resistance to the Quebec government’s neoliberal measures has to take into account all of these sectors, establishing a social link that enables us to speak of a community.

The government is trying to compartmentalize our strike by saying its tuition hike is designed to get the students to pay their “fair share.” However, the students have attempted from the outset of the strike to say that their policy goals went beyond the framework of a strict accounting and corporatist exercise with the government. Of course we want to see the government cancel this tuition fee increase, but at the same time we want to challenge the economic imperative that informs the policies of our governments.

If it is to do this, the student movement cannot remain alone, and must be joined by all of the forces that make up our society and make it live – whether it is the workers in healthcare, education and social services; the workers locked out by Rio Tinto and laid off by Aveos, victims of unfettered capitalism; the casual employees of the Couche-Tard convenience stores, denied the right of association; the women faced with Conservative threats to their rights; the elderly forced to work longer; or the Indigenous peoples seeing a new colonization that pillages the territory remaining to them.

From the student strike to the social strike

The striking students are aware of their inability by themselves to force the government to retreat from these various measures. Hence the necessity for the student movement to be joined by all social forces in our fight against Finance Minister Bachand’s cultural revolution. We are not appealing here for some superficial support, with a few union full-timers writing a news release repeating for the umpteenth time their support for the student struggle. On the contrary, we are calling for a convergence of the Quebec people as a whole in opposition to the cutbacks and the commodification of social services and our collective rights. Only a generalization of the student strike to the workplaces can make this convergence effective. It is therefore a call for a social strike that we are issuing to the population as a whole!

The government’s response to the students is to muzzle them through the courts and police truncheons. The education minister is making daily efforts to break the strike that the students voted for democratically. Our best response to the hardening of the state’s management of the strike is to widen it, to render impossible any isolated repression. Let us stop fearing the laws that fetter our discontent, let us collectively disobey and go together into the streets of Quebec. Alone, this disobedience will be marginalized and repressed by the government. But if all sectors of Quebec society act together the government will be unable to rely on the courts.

We must build this social strike from the bottom up, by initiating a discussion in the workplaces on how to desert our day-to-day occupations. Let us call for general meetings in our local unions to discuss the possibility of instituting such a strike.

Let us contact the community groups in our neighborhoods, to hold citizens’ assemblies on the social strike. These assemblies are the expression of our capacity to deliberate together and to build a movement that goes beyond the limits established by the elite.

May the streets, occupied for two months now, become the expression of our collective refusal.

The government is now scared, it is ready to yield. Let us seize the moment to throw a wrench into the gears of the cultural revolution and defend a society that puts people before profit. •