On the ground at the Peoples Summit – Cartagena, Colombia

At the Summit of the Americas in Cartagena, Colombia, Stephen Harper spoke to CEOs from across the Americas and unveiled Canada’s plans to expand into Latin America with vigor. Trade and investment, especially in the resource extraction sector, will be the engines driving this expansion. Canadian mining companies already have a significant presence in the region, with two-thirds of all mining projects in the Americas.

Harper carefully outlined to the business leaders the importance of the extractive sector to the Canadian economy, emphasizing that “mining alone contributed $50-billion to GDP in 2011.” He went on to boast about the high standards of the industry, saying that Canadians are “justly proud” of their mining industry “for its elevated sense of social responsibility.” 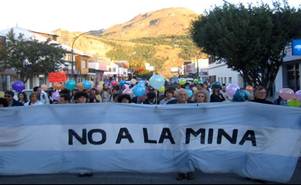 What he neglected to mention was that many communities in the region don’t share his vision of development and that Latin America is rife with resistance against Canada’s extractive industry. Montreal’s Osisko company learned this lesson the hard way when it tried to impose a mining project in the northern part of the state of La Rioja, Argentina. Even though the project was only in the exploratory stage, it met with local and nationwide protest. So much so that the company publicly acknowledged that it lacked a “social license” for exploration and development around the Famatina project, and put its operations on hold.

The number of communities organizing to halt mining encroachment goes on and on. One only has to turn on the TV or read a newspaper to understand the depth and scale of the resistance being waged against Canada’s aggressive resource extraction sector in the region: an industry that is notorious for corrupting public officials, increasing militarization, escalating conflict, and degrading the environment in areas where companies set up shop. The benefits too often seem to be lost to those living in the regions that are supposed to reap the trickle-down benefits of the industry.

Similar protests against Canada’s Barrick Gold in Chile forced the company to withdraw their request for public financing of its Pascua Lama project after large protests against its operations for “mine worker deaths, irreparable damage to glaciers, state sanctions against the company and ongoing problems regarding water quality and quantity affecting farmers in the area.”

In Marmato Colombia, artisan miners are defending their land and way of life against Gran Colombia Gold, a Canada-based gold and silver company. Many in the community oppose the company’s plan to relocate the town in order to make way for its project. Tensions escalated in 2011, when Marmato’s parish priest, José Reinel Restrepo, was shot dead by unidentified assailants. Coincidently, he was a vocal and ardent opponent of the displacement of his community. Weeks prior to his murder “Father Restrepo had visited the city of Bogotá together with municipal leaders in order to denounce the general unease in his community arising from the proposed large-scale open-pit gold project.”

Central America has not been immune to the negative impacts of Canada’s extractive industry either. Opposition to Canadian companies is widespread there too. An emblematic case deals with Vancouver-based Pacific Rim and its El Dorado project in El Salvador. Early in the exploratory stages of proposed mining in the region, residents uncovered the negative environmental impacts of mining on their community. “These included reduced access to water, polluted waters, impacts to agriculture, and health issues” and the fact that “only a tiny share of Pacific Rim’s profits would stay in the country, and that the El Dorado mine was projected to have an operational life of only about six years, with many of the promised jobs requiring skills that few local people had.” Community members began to organize and oppose the exploration. In turn, an escalation of violence was unleashed against organizers who opposed the exploration. Human rights violations resulted in increased public pressure against the mining exploration projects. Given this pressure, outgoing president Tony Saca refused to extend an exploitation license to Pacific Rim in 2008. In 2009, newly elected president Mauricio Funes declared a moratorium on all mining exploitation permits.

These are just a few of the countless examples of the continent-wide opposition to Harper’s vision of Canada’s extractive sector and its “elevated sense of social responsibility.” Much of this was synthesized in Cartagena, Colombia at the People’s Summit. The Summit is a large civil society forum that runs parallel to the official Summit of the Americas. It was titled, “the true voice of the Americas.” It brought together a diverse sector of groups including indigenous, Afro-Colombian, campesino, labour, ecumenical, NGO and student organizations from across the Americas to share stories, build links and discuss strategies on various topics relevant to people in the region. One key topic was the encroachment of resource-hungry transnational companies on communities in Latin America. The People’s Summit culminated in a march that saw over 8,000 people take to the streets despite the presence of thousands of police and military personnel.

The final declaration that came out of the People’s Summit is a testimony to the fact that many sectors and communities in Latin America are not reaping the benefits of Canada’s mining and resource extraction industry. In fact, it’s often the opposite, and this was clearly outlined in the final declaration of the People’s Summit, which labels Canada and its promotion of this policy of development as nefarious.

“For its part, the Canadian government has promoted a policy of Free Trade Agreements, mega mining and resource extraction of natural resources and energy in all Latin America. Many of its companies are causing irreversible damage to the environment, biodiversity, violating the rights of the people and their lands and the sovereignty of countries of the south. Social and environmental conflict increases in regions as a result of this non-consultative imposition.”

Harper’s new Americas’ strategy premised on the principles of prosperity, democracy and security in the hemisphere leaves much to be desired if the locomotive of resource extraction in conjunction with Free Trade Agreements (FTAs) continues to drive the agenda. These agreements are used as wedges to open doors for Canadian companies. FTAs provide the architecture of impunity for corporations as they seek to deepen corporate rights and increase profits at the expense of communities and their lands.

The conservatives’ misguided and short-term strategy to aggressively promote this environmentally destructive resource extraction industry in Latin America is bound to fail. Rather than bringing prosperity, democracy and security to the region, it will fan the fire of discontent and opposition across the continent. Harper’s disingenuous promises of improved corporate social responsibly in the region will not be enough to placate a proud people with a long history of struggle and resistance. They have seen the results first-hand and know all too well that the negative impacts of such policies vastly outweighs any short-term gains.

Harper was correct when he said, “resource development has vast power to change the way a nation lives.” Unfortunately, today, for many living in Latin America, that change is often all too negative. •

Raul Burbano was in Cartagena, Colombia, attending the Peoples Summit from April 12-14. This article first appeared at Common Frontiers.