Has the time arrived for a general social strike?

On Wednesday, April 25, Education minister Line Beauchamp abruptly ended the negotiations with the student leaders to which she had reluctantly agreed two days earlier – before they had even got to the key issue of the $1625 fee hike. She refused, once again, to negotiate with the CLASSE, the largest student union, which represents about half of the 180,000 students now on strike in Quebec’s post-secondary colleges and universities. That effectively ended the negotiations, since the other two student unions refused to break their united front with the CLASSE and fall for the government’s blatant attempt to divide them. 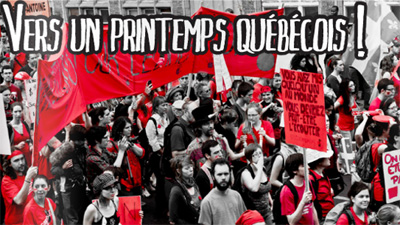 The minister’s pretext this time was even flimsier than her earlier refusal to meet with the CLASSE. She claimed that an announcement of a demonstration that appeared on the CLASSE web site constituted a breach of the 48-hour “truce” on civil disobedience actions she had imposed on the students as a condition of the talks. However, the demonstration in question was not organized by the CLASSE, and had been announced on many websites, including Profs contre la hausse, which represents the thousands of professors who are supporting the students.

The strike is now at an impasse. The students are determined to continue their protest; thousands took to the streets of Montréal within hours of the minister’s announcement. And they are being joined by pupils in a growing number of high schools. But the two-month long strike by more than one third of Quebec’s college and university students has not sufficed to win even preservation of the status quo, a freeze on current tuition fees, let alone the free post-secondary education sought by the CLASSE.

The Liberal government’s hard line, supported by the far-right opposition party Coalition Avenir Québec (CAQ), reflects their determination to preserve the entire neoliberal package represented by the recent federal Conservative and provincial Liberal budgets. It is not the expense of higher education that motivates them – that’s a mere bagatelle compared with many other state expenditures. They are determined to extend the user-pay ideology into additional social sectors, to provide more openings for the privatization of educational facilities, and to roll back the mounting public support for free education at all levels including university – one of the original goals of Quebec’s Quiet Revolution of the 1960s. Even a freeze on tuition fees, as won by the students in some previous mobilizations, is now seen as an acknowledgement of this principle of gratuité scolaire. And in the background is the downward pressure on Quebec’s relatively advanced, if limited, welfare state exerted by market forces bolstered by ‘free trade’ agreements like NAFTA and the pending deal between Canada and the European Union.

It is now clear that in order to succeed the students must be joined by additional forces. Above all they need the active mobilization of the trade unions, the only social force that can quickly and qualitatively change the relationship of forces at the point of production and provision of services. The CSN[1] has voted in convention in favour of a 24-hour social strike by its 300,000 members; a good start could be made on May First, the now traditional labour day in Quebec celebrated by all the major unions, usually with a giant demonstration in Montréal. Unfortunately, there is no visible militant wing in the unions at present challenging the inertia of the union bureaucracy.

However, the issue has been debated recently in some circles in Quebec, including some unions. The following document was produced in 2010 by the committee on the social strike established by Quebec’s Coalition against privatization and user fees for public services.[2] It is republished in the current (April 24) issue of the web journal Presse-toi-à-gauche as a contribution to the discussion on the next steps facing the unions and social movements in the broadening and deepening mobilizations this spring against the neoliberal agenda of the government headed by Premier Jean Charest. It could provide fuel for the debate on the current political situation scheduled to be held at the delegated convention of Québec solidaire this coming weekend. Here are some major excerpts; my translation from the French. •

This article first appeared on Richard Fidler’s blog Life on the Left.

Coalition Against Privatization
and User Fees for Public Services

Why discuss a social strike?

The Coalition against privatization and user fees for public services was formed to fight the neoliberal intentions of the Charest government, which is moving to reinforce the regressive nature of the revenues collected by the government while decreasing the resources devoted to social services, and thus opening the door to the private sector in many of the fundamental tasks that the government is supposed to assume. The coalition now groups more than one hundred community agencies, trade unions and popular organizations.[3] […] 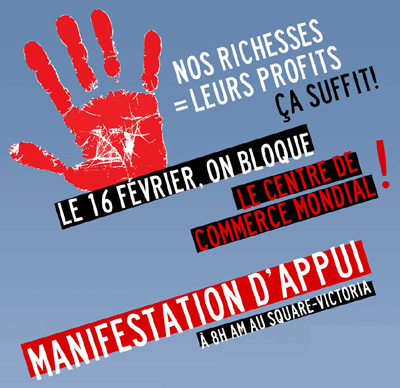 In this context, the Coalition adopted the following proposal at its meeting of May 31, 2010:

The task is not to discuss the intrinsic value of the social strike, but to do so in relation to the present conjuncture. Is it relevant and feasible in the present struggle against the orientations of the Charest government?

What is a social strike?

A social strike is the widest possible stoppage of work and activities by workers in the public and private sectors as well as by other social movements, students, women working in the volunteer sector, etc. It does not fall within the legal bargaining framework of a collective agreement. It has objectives of a broad social and/or political scope. Unlike many European or South American countries, Quebec – like the rest of Canada and the United States – does not have a great tradition of social strikes. There are many reasons for this, but it is no doubt explained in part by the present statutory framework. The type of trade-union organization we have in Quebec, with the Rand formula,[4] also plays a role in configuring the way in which big social struggles are organized. Notwithstanding, we find some notable exceptions in history.

A. The May 1972 strike of the public sector workers

Although it was within the context of bargaining a collective agreement, the strike of the public and parapublic sector workers in May 1972 in Quebec had many characteristics of a social strike. Its objectives were social in their scope (a minimum weekly wage of $100). The walkout extended to a section of the private sector. And the actions used – for example, occupations of cities or media – went beyond the traditional frameworks.[5]

The general strike of October 14, 1976 was organized on a Canadian scale. It had a clear political objective, the withdrawal of the wage-freeze Law C-73 adopted a year earlier by the federal government under Pierre-Elliott Trudeau, which affected the entire working class. It mobilized workers in private and public sectors, and was supported by many social movements. In all, more than 1 million workers staged a one-day walkout in 150 cities across Canada.

C. The 2004 debate on the general strike against the initial policies of the Charest government

In 2004, a proposal for a one-day general strike to oppose the orientations and laws adopted by the Charest government immediately upon taking office was debated in the local unions affiliated to the major trade-union centrals, and many of these unions adopted strike mandates. A discussion was also begun in the Réseau de vigilance, the erstwhile coalition formed to oppose the direction taken by the Charest government, about the relevance of extending the strike to other sectors, such as the community milieu, and to make it a social strike. The idea of a general strike was abandoned given the requirement posed from the outset of obtaining the participation of all the union centrals, which proved impossible. We might mention, however, that the mandate had been achieved in some centrales. A question for further discussion: Do we all agree on the proposed definition of a social strike? What form might it take in our milieu? […]

Is the social strike feasible in the present context?

A number of conditions must co-exist if a social strike as defined earlier can take place successfully. It is necessary to have the support of the largest possible number of groups in all sectors, including the trade unions. In the case of the latter, the participation of the public sector is essential if it is to have the bandwagon effect on the private sector. The social strike is impossible, however, without the participation of a least a section of the union centrals. The anger must be sufficient to justify the risks that will be taken. The government, or some of the measures it intends to take, must be considered illegitimate by broad segments of the population. The traditional means of struggle must have revealed their limitations; the social struggle must come in the wake of a mounting series of actions or appear to be justified by a breakdown in democracy.

Do we think all of the conditions set out above must exist in order for a social strike to be considered feasible? Do they in fact exist in the present context? If not, can they be assembled within the near future? […] •

3.
For a current list of member organizations, see www.nonauxhausses.org/membres.

4.
A reference to the industrial relations regime established following World War II, in which unions are granted some legal recognition and the automatic dues checkoff in return for abandoning the right to strike during the life of a contract, and the statutory provision of “residual rights” clauses for management, etc.