Quebec public-sector unions organized in the Common Front reached a tentative agreement with the government of Premier Philippe Couillard right before the holidays on December 17. The agreement followed an explosive fall filled with rotating regional public-sector strikes and anti-austerity protests that culminated in the largest general strike in Quebec’s history, when more than 400,000 workers stayed off the job and shut down most government services on December 9. 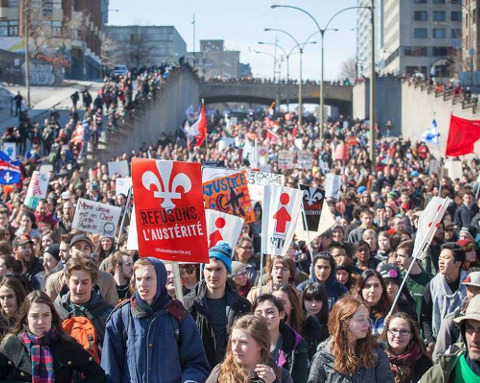 The wave of militancy forced the Liberal Party’s Philippe Couillard to back down from his most extreme demands for concessions in negotiations with the unions. Trumpeting the need for a zero deficit budget, he had offered only a 3 per cent wage increase over a five-year contract, while demanding an increase in the retirement age to 62, along with a long list of givebacks in working conditions.

The Path to the First Agreement

Couillard didn’t help his case when he violated his own supposed principle. He gave doctors, who comprise a significant constituency within the Liberal Party, a 42 per cent wage increase; raised the salaries of ministers of the National Assembly by 31 per cent; and finally bailed out Quebec’s aerospace manufacturer to the tune of $1.3-billion. Clearly, Couillard could find money for his cronies and for big business.

By contrast, the unions had the wind in their sails headed toward the end-of-year showdown. The student movement had already turned Quebec against austerity in 2012 with their Maple Spring strike that shut down the province’s higher education system for months. They brought down the previous Liberal Government of Jean Charest and stopped his attempt to raise tuition.

With that precedent, the unions were in a strong position after their contracts expired last spring. In negotiations, they started by demanding a 13.5 per cent wage increase over a three-year contract, no increase in retirement age and improved working conditions. When talks broke down at one point late last year, Quebec Treasury Board President Martin Coiteux declared the two sides were still “light years apart.”

But in the wake of the general strike and an opinion poll showing that 51 per cent of people in Quebec supported the unions, the government retreated on its worst demands.

The Common Front negotiators therefore settled a tentative agreement that increases wages by a minimum of 9.1 per cent and as high as 10.25 per cent for some workers over the life of a five-year contract. They compromised on the retirement age, agreeing to let it rise to 61 in 2019. Most union federations have also agreed to side agreements that stopped the worst concession demands on working conditions.

Both the government and Common Front negotiators have celebrated the agreement as a victory. “At the end of the day,” Couillard declared, “it’s a good deal for the taxpayers – for the patients in the hospitals, for the kinds in the schools and their parents – and also for our public-sector employees.”

The president of the Fédération des travailleurs du Québec (FTQ), Daniel Boyer, declared, “We succeeded in the course of these negotiations in forcing the employer to abandon most of its demands.” Louise Chabot of the Central des syndicats du Québec (CSQ), stated, “We can announce that the work has been rigorous and fruitful, and that we have an agreement in principle that we will quickly recommend to our members.”

The Fédération interprofessionnelle de la santé du Québec (FIQ), which represents 65,000 nurses and was negotiating with the government separately from the Common Front, has also agreed to a tentative contract, with the same 9.1 per cent raise over five years and an increased retirement age of 61.

They had already reached a tentative agreement on working conditions that included a higher ratio of nurses to patients, bonuses for working critical-care shifts, and more full-time positions. A spokesperson for the union called it an “historic victory.”

Daniel Boyer rightly called attention to how the strikes and demonstrations forced the government to retreat. “It was the mobilization that made the government move,” he stated.

But several unions and a growing number of rank-and-file militants think the Common Front could have won an even better deal.

Seeing Through the Smoke and Mirrors

Many are now agitating for union members to vote down the agreement. Robert Green, a teacher in Montreal, called the agreement “a hollow victory.” In an article for Ricochet, Green shows that the Common Front has exaggerated the size of the wage increases. Contrary to union leaders’ claims, in the first and fifth years of the contract, workers will get not salary increases but lump sums of $250 and $500 respectively, according to Green.

Green also says that the Common Front leaders included separate agreements on step increases in wages, known as “relativity.” He concludes that once inflation is factored in, teachers, for example, “will have suffered a 2.35 per cent reduction to their purchasing power by the end of the contract.” The same will be true for most other workers.

So while the Common Front did beat back the worst concessions demanded by the government, its deal on pay is far from what public-sector workers wanted or deserved, especially considering that wages have shrunk by 4.5 per cent due to inflation since 2004. That’s why the radical teachers union, La Fédération autonome de l’enseignement (FAE), recommended that its members reject a similar deal that the government proposed to them.

Opposition to the Deal Grows

Like the FIQ, FAE is outside the Common Front and represents 34,000 teachers in French schools mainly in Montreal and the western areas of the province.

FAE Union President Sylvain Malette blasted the agreement, declaring, “To suggest that the lump sums are wage increases is demagoguery. On the eve of the New Year, our members are more likely to get rich by buying a lottery ticket.” The FAE has promised to continue the struggle and may vote on more strikes this winter.

An Organized and Discontent Rank-and-File

In perhaps the most important development, the Fédération de la santé et des services sociaux (FSSS), which is inside the Common Front and represents over 110,000 workers, most of them low-wage employees in the health care sector, came out against the agreement after a stormy meeting of over 600 delegates on December 22. The delegates overruled their elected leadership that had come to the meeting recommending approval of the deal.

FSSS is instead proposing 10 more strike days this winter. This rejection of the deal and promise to continue the struggle is significant since the union represents over a quarter of the 400,000 members in the Common Front. In a statement after the meeting, FSSS spokesperson Jeff Begley said, “If there is money for doctors, for Bombardier and for tax dollars to be allowed to escape into tax shelters, there is money for our public services.”

Another union, Syndicat regroupant l’ensemble des professionnels du gouvernement du Québec (SPGQ), which represents white-collar workers, has also has not approved the deal, nor struck a side agreement.

Benoit Renaud, an adult education teacher and member of FAE, underscored the significance of the FSSS joining his union in opposition to the agreement. “Many of us were worried that we would be isolated with just our 34,000 teachers if all the Common Front unions agreed to the deal,” Renaud said. “But now, with FSSS bringing its 110,000 members into an ongoing struggle, we have more confidence for the ongoing fight.”

The newly organized network of rank-and-file militants Lutte Commune, which formed in the run-up to fall’s strikes and protests, is organizing a vote no campaign. They have prepared leaflets to distribute at meetings where union locals and federations will vote on the tentative agreement.

The Response of the Union Leadership

These votes will proceed over the next several weeks. Leaders of the main Common Front unions will push hard for ratification.

Speaking for them, retired CSQ leader Réjean Parent wrote an article titled “Call to Order” for Le Journal de Montreal which predictably argued that this is the best unions can get. Any more strikes, he wrote, risked provoking the government to impose a special law forcing workers back to work and imposing a contract even worse than the one the agreed to by the Common Front. Parent attacked the most militant unions, FAE and FSSS, saying, “They may have appearance of being revolutionary, but their members will pay the price.”

Given this pressure from officials, union members may vote to ratify the tentative agreement. But even in unions that do approve the deal, there will be a sizeable minority of people who think more could have been won. This militant minority will be an important force in continuing to push for all public-sector unions to stand in solidarity with the FAE, FSSS and SPGQ, along with the broader anti-austerity movement.

No Opposition Expected from Elected Officials

That will be essential, because Couillard remains determined to impose further cuts in public services, despite being forced to relent on his worst attacks on public-sector workers. While the confrontation with unions has weakened his position, he has little opposition in the National Assembly and doesn’t face an election until 2018.

The opposition parties, the Parti Quebecois (PQ) and the smaller conservative party Coalition Avenir Québec (CAQ), support Couillard’s austerity measures and are mired in problems of their own. The PQ’s standard-bearer, Karl Péladeau, is a billionaire media mogul who has bungled his first year heading up the party.

The new left party Quebec Solidaire, while it has put itself forward as the main parliamentary voice of the anti-austerity movement, has just three representatives now in the National Assembly, and is therefore not yet able to threaten the Liberals.

So despite its retreat, Couillard’s government will continue to push his austerity agenda, especially as the Quebec economy remains stagnant amidst a slowing global economy. Unions still without an agreement and Lutte Commune will have to agitate for labour to fulfill its stated commitment to continue the struggle against austerity.

Union leaders have made that promise. For example, Louise Chabot, president of the CSQ, said that the “agreement in no way constitutes an approval of the Liberal government austerity policies.” She continued, “We know that the government continues to want to cut back significantly in child care, health and education, and that’s a no-go for the ensemble of Quebec society. If we do not stop it, it will cause considerable damage to our society.”

The first chance to do so will be to build solidarity with FAE, FSSS and any other union that votes down the agreement and continues to struggle for a better deal. If these unions are able to succeed, they can raise expectations for other unions to fight for more.

The unions also have the opportunity to stand behind the struggle against cuts in public education led by parents organized in Je protège mon école publique. As they did on the first of each month throughout the fall, the group has called on parents, students and teachers to form human chains to defend their schools from austerity.

No doubt as the spring approaches, the Red Hand Coalition, which brings together community organizations, students and unions, will continue organizing protests. The student union ASSÉ will also agitate for demonstrations against cuts in the public sector and in higher education. All this will culminate in the annual May Day protests that have played a key role in galvanizing the anti-austerity movement.

However the vote in the union federations turns out, it is clear that the spirit of resistance against austerity born out of the student strike isn’t going away. As Philippe de Grosbois, a CEGEP teacher and elected leader of his union local in Montreal, observed:

“We have to remember what’s been built through the struggle this fall. There’s been a generational turnover among public-sector workers. So the workers who went on strikes and protests were doing so for the first time. They felt their power, and they gained in confidence by fending off the worst attacks, even if this agreement is not that good. That’s very important for the future of the movement.” •

This article first appeared on the Socialist Worker.

Ashley Smith writes for the Socialist Worker. Follow his tweets at @AshleyAreeSmith.