Not content simply to suppress the wages of public workers across the province, Ontario’s Progressive Conservative (OPC) government of Doug Ford has fired a fresh barrage in its ongoing war: it aims to curb the right of education workers to strike. The new front the Conservative Party has opened against Ontario workers occurs at a moment of impasse in a specific contract negotiation. But it may also be understood as an example of a wider crisis in neoliberal public labour management in Ontario.

The year-over-year inflation rate in Ontario hit 6.7 per cent in September, while the provincial budget is currently in a $100-million surplus that the Financial Accountability Office expects to reach $8.5-billion by 2027-28 (despite hundreds of millions of dollars of tax cuts by the province). Despite the strong fiscal position, the province and the Ontario School Board Council of Unions – an umbrella group of Canadian Union of Public Employees (CUPE) education workers in the public, Catholic, English, and French school systems across the province – has negotiated for months over a new contract to no resolution.

The province’s offer includes an annual wage increase of 2.5 per cent for education workers earning less than $25.95 per hour (and 1.5 per cent for those earning more), as well as a cut to sick leave and short-term disability, insufficient job security, and no paid preparation time for workers who work directly with students, in a four-year contract, CUPE has said. At this time, CUPE is seeking annual salary increases of 11.7 per cent. CUPE Ontario President Fred Hahn denounced the province’s offer. “[Education Minister Stephen] Lecce calls this offer a generous one,” Hahn said. “A half percent wage increase to an already-insulting offer isn’t generous. An additional 200 bucks in the pockets of workers earning 39K isn’t generous. It wouldn’t even be generous to accept our proposal – it would be necessary, reasonable, and affordable. It’s simply what’s needed in our schools.”

For its part, the government has couched its messaging in the argument that students in Ontario missed large amounts of school during the COVID-19 pandemic. The province has claimed its offer would raise the wages of the workers in the sector, as well as make changes to benefits contributions, sick leave, training and job stability. Notably, in October, as talks dragged on and education workers voted 96.5 per cent in favour of a strike, Premier Doug Ford warned workers not to “force my hand” in terms of legislative action. 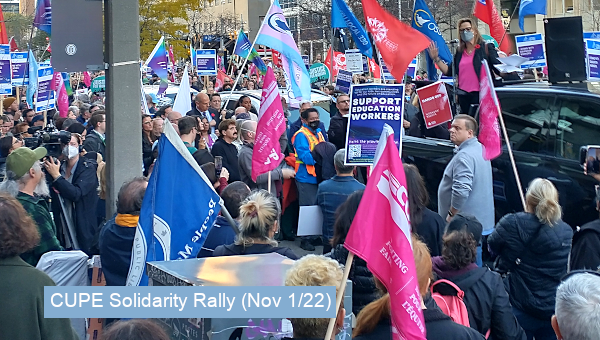 On October 30, the impasse intensified, with CUPE workers issuing a statement that the countdown to job action had begun. In response, Education Minister Stephen Lecce issued a statement of his own, indicating the province would introduce legislation to keep workers on the job. For the most part, the tensions between the government and the workers to that point were somewhat historically unremarkable – however frustrating to the workers as they may have been. What changed all of that was what was contained in the government’s legislation. Bill 28, the bizarrely titled Keeping Students in Class Act, 2022, would not only impose the government’s contract, it would keep employees on the job by invoking the “notwithstanding” clause, or more precisely, Section 33 of the Canadian Charter of Rights and Freedoms to override the fundamental freedoms, rights to life, liberty and security of person, and equality rights of education workers to challenge the province – despite the Human Rights Code. By taking this remarkable step, Lecce claimed the government was merely keeping its promise to parents that it “will do whatever it takes to keep students in class, so they can catch up and get back to the basics of learning.”

Since the introduction of Bill 28, the government has not only attempted to get parents on side with its agenda, but Doug Ford also personally appealed to rank-and-file education workers, claiming the government has no quarrel with the workers themselves – only with union leadership. Ontario’s plan to use the notwithstanding clause as a cudgel in its bargaining was criticized as “wrong” by Prime Minister Justin Trudeau, whose own federal Liberal government imposed back-to-work legislation on postal workers in 2018, and whose father, Prime Minister Pierre Elliott Trudeau, was responsible for introducing the charter – notwithstanding clause and all. The plan has also been decried by education advocates as an authoritarian intervention that suspends collective bargaining in Ontario’s public sector.

But, despite all of this, education workers, who have sought an improvement in their quality of life as well enhancements to education funding in a province becoming increasingly unaffordable, have refused to cower in the face of the province’s escalating threats. On November 1, thousands of workers confronted the government in the streets, demonstrating outside the provincial Ministry of Labour in Toronto. Flying the flags of Ontario’s public sector unions, they were met in solidarity by a number of private sector workers, from industrial unions in the electrical and steel sectors, and retired unionists. “This is not just about education workers,” CUPE Ontario’s Hahn told the crowd gathered on University Avenue. “It is about all workers.” CUPE has said its education workers will walk off the job on Friday, November 4 in spite of the provincial legislation. Teachers were also vocally supportive at the rally. Elementary Teachers’ Federation of Ontario President Karen Brown condemned the government’s proposed use of the notwithstanding clause as trampling workers’ rights. And Karen Littlewood, President of the Ontario Secondary School Teachers Federation (OSSTF) reminded the crowd the Ford government’s legislation moves against a majority-women workforce. “We are ready to fight back,” Littlewood said.

While the battle between education workers and the government is currently front and centre, it is just the most-recent example of a decades-long protracted conflict between the Ontario state and its public sector workers, which reflects wider ideological tendencies during the neoliberal moment of capitalism. This includes government retrenchment through cost-cutting, ‘lean’ workplaces, and attempts to manage labour through increasingly coercive measures over collective bargaining and strikes.

All the parties in Ontario forming governments over the last several decades have contributed to this project of public sector austerity: from the Social Contract under Bob Rae’s New Democratic Party which opened public sector collective bargaining agreements and imposed unpaid days off; to the ‘crisis’ invented by the Conservative Party under neoliberal vanguardists Mike Harris and Ernie Eves, during which funding for education was cut, elected school board representatives were marginalized, and clashes with teachers were provoked; to the tense contract negotiations and accusations by educators complaining of bad-faith bargaining, and the use of back-to-work legislation by the Liberal Party under Dalton McGuinty and Kathleen Wynne – despite that party’s less-confrontational rhetoric (Albo and Evans, 2018). These practices have not only continued during the OPC era of Doug Ford, but have intensified.

Public sector workers have had their wages artificially frozen under Bill 124, misleadingly titled as Protecting a Sustainable Public Sector for Future Generations Act, 2019, and back-to-work legislation has been used to stomp on the rights of university workers. And this was before the repeated openings and closings of schools by the Ford regime during the COVID-19 pandemic, amid accusations by workers that too little was done to protect health and safety.

However, the significance of the plan by the Ford government to impose its contract at the barrel of the notwithstanding clause cannot be understated. This is open class war by a private sector-oriented government using state institutions to enforce its will. In Ontario, it is an unprecedented stage of anti-worker dogma, even for a government that instrumentalized the publicly-funded healthcare system to support repeatedly caving to the demands of the capitalist class for re-openings during the pandemic. It is clear whose interests this government serves, and from whom it takes its inspiration. 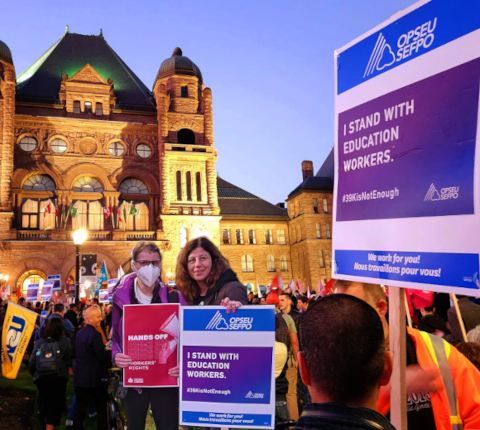 Antonio Gramsci (1971: 219-23) argued that historically opposing forces can reach a catastrophic balance in such a way that conflict can lead to mutual ruin. It is in conditions such as those that numerous outcomes are possible – either progressive or reactionary, and they may involve the development of coalitions and/or the emergence of “heroic” leadership. It seems clear by the government’s messaging that Doug Ford, Stephen Lecce and the Conservative Party want this to be a defining moment of leadership, and that they will inappropriately attempt to impose a constitutional power to take the upper hand in their class war and to reanimate the corpse of neoliberal vanguardism. Indeed, with a majority in the provincial legislature, the government is all but assured the passage of Bill 28. But Doug Ford is no Caesar figure. His government’s confidence in calling on the power of the Canadian constitution is likely to find few allies in the federal government. And despite limited clout in the legislature, opposition parties still have an opportunity to push back against the most regressive of neoliberal policies by using what procedural avenues they have to delay the government’s bill.

As well, the government’s attempts to Frankenstein a coalition in civil society with parents, who are understandably exhausted by the pandemic and frustrated about the education lost by their children, is a cynical ploy. Well-resourced education workers are clearly better-positioned to do their jobs with students. Additionally, the premier’s attempt to fragment the resolve of education workers themselves, who voted almost unanimously in favour of a strike mandate, by splitting them from their leadership is a desperate attempt to convince them to abandon their interests. Such transparent propaganda is insulting to the intelligence of workers across Ontario. These are hardly the foundations of stable state-civil society coalitions, even in as thin a liberal democracy as exists in Canada. And federal leaders admit the notwithstanding clause is not supposed to function as an external force to crush workers when governments are at a bargaining impasse.

Can CUPE Do It? 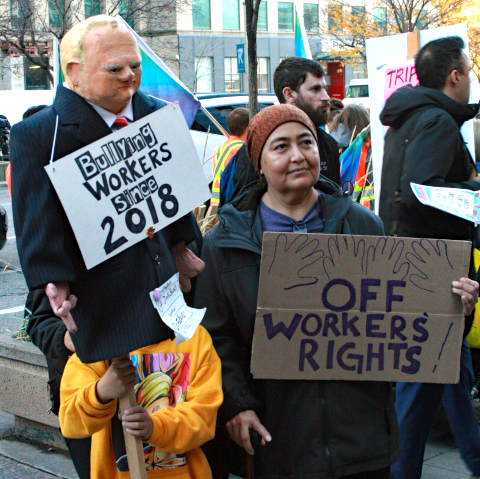 That CUPE has served notice it plans to defy any attempt to suppress a strike by walking off the job is an important burst of militant class consciousness. It elicits memories of Ontario’s Days of Action in the 1990s. But this is not 1995. At this point, public workers in Ontario have endured attacks for decades, and the maneuvers of the Days of Action now seem like they should be a bare-minimum starting point. Yet, as iron-fisted as the OPC government has positioned itself, it has allowed a crack in its foundation to be exposed: the government has clearly shown that it cannot keep the upper hand without resorting to intensified coercion. Its attempts to build consent have been laid bare as mere performance, and its move to overt coercion to maintain the neoliberal policy regime, with its logic of deepening social inequalities and protecting capitalist class interests, screams out its true intentions.

If this is as much a crisis for the government, it bluntly re-poses the crisis that workers and unions have experienced in Ontario and Canada for some time. The neoliberal parties across Canada and the capitalist class, with whom they fit hand-in-glove, should be worried they have revealed that the old ways of organizing cannot continue and unexpected developments may well unfold. The Ontario working class has a chance here to change their circumstances in the struggle with the authoritarian Ford government and change themselves in doing so. With the right counter-moves and a firm militancy, building on progressive coalitions of solidarity between public and private sector workers and between education workers and parents, the fissure now exposed in the class politics of Ontario might be widened and a fightback and a new politics might pour through the cracks. • 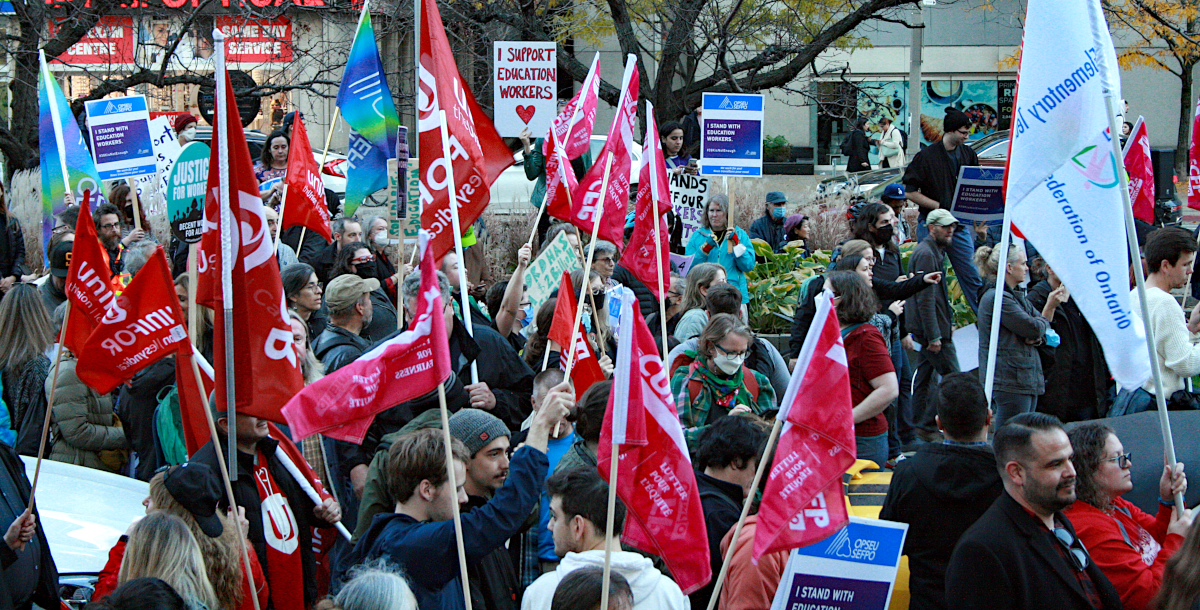 Photos from CUPE solidarity rally outside the Ontario Ministry of Labour offices, and Queen’s Park Legislature, in Toronto, November 1, 2022. Visit dontbeabully.ca for latest news from CUPE.

Joseph Fantauzzi is a PhD student in the Department of Politics at York University and a former newspaper journalist. He studies the political economy of Ontario.