In Support of CUPE Education Workers

Over the past several decades, governments in Canada have intervened in labour disputes on behalf of employers with increasing frequency. In recent years postal workers, teaching assistants, college instructors, pilots, healthcare workers, and others, have had their collective bargaining rights trampled by back-to-work legislation passed at both the provincial and federal levels.

This week, Ontario’s Conservative government added 55,000 education workers, members of CUPE’s Ontario’s School Board Council of Unions to that list. As recent back-to-work laws have been retroactively found to be unconstitutional, the Ontario government took the unprecedented step of invoking the notwithstanding clause, overriding the Charter of Rights and Freedoms. This move is not particularly surprising. However, the response of CUPE is. Rather than continue to work and vow to fight the law in court, CUPE announced that, despite the legislation, its members would begin a job action today, Friday, November 4.

Resistance to the assault on trade union freedoms in Canada is long overdue. CUPE education workers are providing a new and inspiring rallying cry. But for CUPE’s wildcat strike to succeed and for the defence of public and private sector unionized workers in the medium and longer term, will require building a wider, deeper and ultimately, more radical response. The broad support of workers and the labour movement will be required.

There are already encouraging early signs of mobilization: the Elementary Teachers’ Federation of Ontario suspended its own collective bargaining negotiations with the province; OPSEU educational workers are engaging in a solidarity strike and the Ontario Federation of Labour, along with its affiliates (and Unifor), are organizing strategic picketing, rallies and demonstrations in solidarity with CUPE. 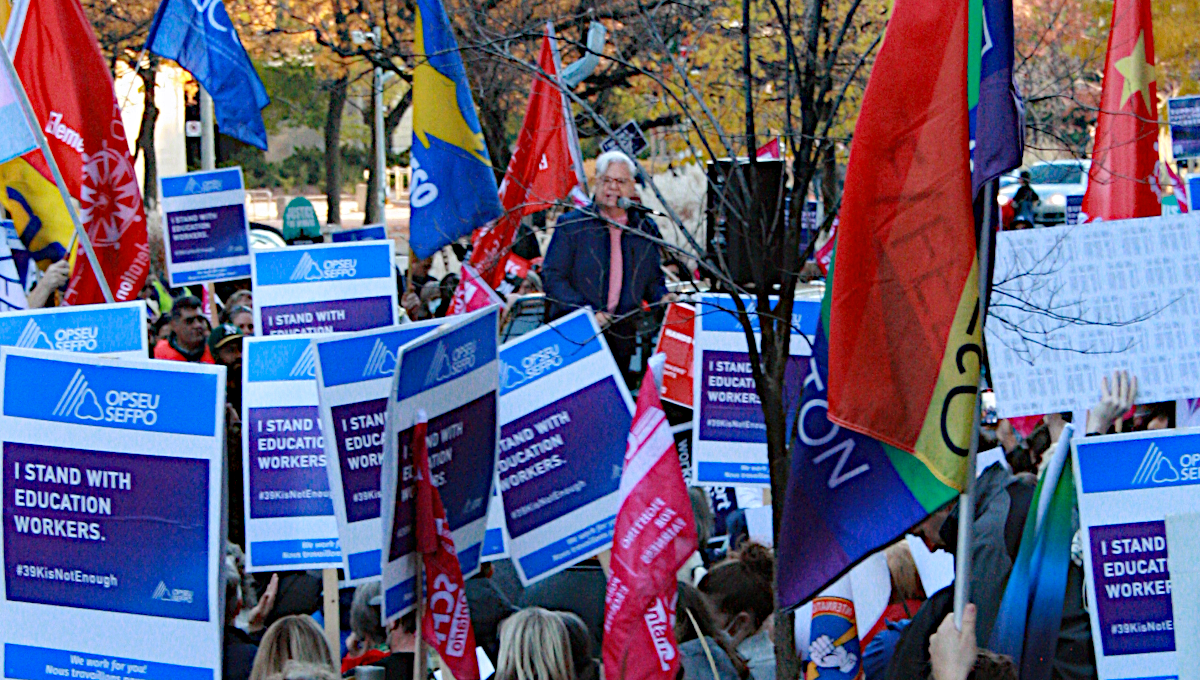 Why is Ford Doing This?

The legislation that was cynically passed will deny CUPE workers the right to strike and impose severe limits on their incomes for four years. The notwithstanding clause will eliminate their right to seek relief in the courts during that period as well. Further, there is a $500,000 daily fine levied against the union for every day on strike and $4,000 per individual striker.

The immediate target of the law are the underpaid and overworked education workers. Their work is essential to the operation of the public school system. They provide the infrastructure for our schools, as teaching assistants, secretaries and custodians.

Their average pay is $39,000 per year and that has lost value due to inflation and the stingy limitations placed on their wages, as part of Ford’s earlier Bill 124 that capped increases for public sector workers.

Premier Ford and his Education Minister Stephen Lecce cynically claim that this is necessary to keep kids in school, after the experience of the COVID pandemic closures, trying to take advantage of the legitimate concerns of working class parents, who have to provide for child care if schools are closed, and students, many of whom have fallen behind during the pandemic period.

But it is Ford and his government who are guaranteeing school closings by refusing to bargain with the CUPE workers – even after their dramatic compromise offer – knowing full well that this will surely cause chaos.

Let’s be honest – the goal of Ford and Co. is not to provide quality education for students (after all, they cut $800 per student in spending and increased class sizes and, all the while they are nursing a budget surplus). They know that their acts will cause disruption and anxiety among parents, teachers and students – just like their predecessors in the mid-1990s in the Conservative government of Mike Harris and Ernie Eves.

They want to make it impossible for public sector workers to bargain collective agreements, and they are seeking to ride a wave of parent anxiety, in order to limit the bargaining rights and lower the wages and benefits of CUPE workers, as a prelude to come after other public sector workers (teachers, nurses, medical workers). As well, they have close ties to private businesses looking to privatize components of and weaken confidence in the public education system as a whole.

And, if they can get away with the precedent of outlawing the right to strike and freely bargain against the CUPE education workers, what’s to stop them from doing the same thing to other public sector unionized workers and, even private sector workers – whom they can deem ‘essential’ to the operation of the economy? The result could be a return to the dark ages of anti-unionism, violence and ultimately, an even lower wage economic environment than we already have.

The CUPE education workers have built a solid base inside their local. They have prepared their members for this kind of an attack and they are refusing to back down in the face of this cowardly and cynical attack on their and all of our rights. They have struck on Friday, November 4th, and OPSEU educational workers, led by their newly elected provincial leader, JP Hornick, have openly joined them in refusing to work until there is a decent settlement.

They have received support from the Ontario Federation of Labour and a number of other unions, for a series of demonstrations, rallies and picketing. This is important and should be celebrated.

This though, is not enough. Successfully beating back Ford requires a response that must be built over time. Like the Ontario Days of Action in 1995 – a series of one day general strikes across the province, led by the OFL – there needs to be some form of wider strike action built over a relatively short period by other public and private sector unions. But this can’t happen by itself – it must be built.

How do we do this?

The labour and community networks need to come to the aid of the CUPE workers, and to keep the momentum going as it continues and what come after. This is not a battle that will end soon – regardless of what the government does in the next few days. Building against Ford and creating a fighting infrastructure of struggle and political understanding in the union movement, inspired by the CUPE fight will take longer, but it needs to happen.

The Socialist Project supports CUPE and all efforts to stand up to Ford and Lecce, and the economic interests behind them and the necessary and welcome campaigns to build further. •