The Petro-War of Chrystia Freeland: Canada's Military Support for Ukraine

According to the Globe and Mail, the Minister of Finance, Chrystia Freeland, is in charge of the campaign of military support for the Ukraine. As Canada’s Vice-Prime Minister, she presides over the committee made up of Canadian military Chief of Staff General Wayne Eyre, Minister of Foreign Affairs Mélanie Joly, Minister of Defence Anita Anad, and Clerk of the Privy Council Janice Charrette.

Once again, Prime Minister Justin Trudeau has been sidelined, the same as he was in the Meng Wanzhou affair, when Freeland rejected all proposed solutions, even one from Jean Chrétien, and displayed a lot of determination to poison Canada’s relations with China.

Warmonger Freeland is the spokesperson of the powerful Ukrainian lobby in the federal cabinet. Born in Alberta of Ukrainian parents, she was noted, even before entering federal politics, for her anti-Russian activism, to the point of being declared persona non grata in Russia.

Canada has given $700-million worth of military aid to Ukraine since 2014 and has just approved a package of “economic” aid worth another $120-million. Retired general Michael Day, who headed Canada’s Special Forces, has stated that this money could allow Ukraine to free up funds to buy arms. We should add that the frigate HMCS Montréal of the Royal Canadian Navy is now headed to the Mediterranean and the Black Sea. 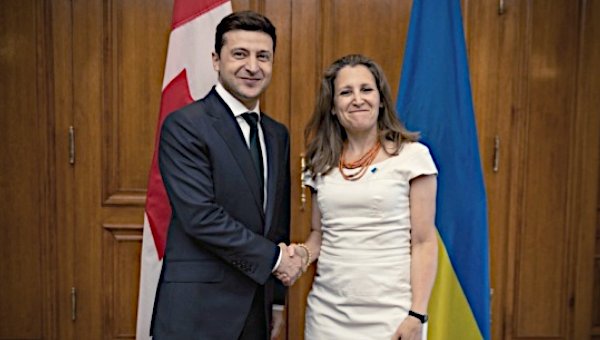 Behind the Ukrainian Lobby and the Oil Lobby

Canada may have the biggest Ukrainian community outside of Ukraine, but the Ukrainian lobby does not explain everything. Behind the Ukrainian lobby is the oil lobby. The geostrategic stake in the confrontation between NATO and Russia, one about which little has been said, is the decoupling of Europe from Russia, an end to European dependence on Russian hydrocarbons. More than 40% of the natural gas and 20% of the gasoline consumed in Europe originates in Russia. The most dependent countries are Germany, Italy, and Turkey.

At the heart of the matter is the Nord Stream II natural gas pipeline, whose construction has just been completed. It would allow Russian exports to double and would reduce to secondary importance the gas pipeline that presently passes through Ukraine and Poland to other European countries. To abandon the gasline would deprive Ukraine of $4-billion in annual fees and a certain degree of control over exports from Russia.

The German government has so far repulsed the pressure that the United States has exercised to get Germany to prevent Nord Stream II from starting to operate, arguing that it is a private enterprise. But in any case, Germany would find it hard to carry out such prevention in the event of a military confrontation involving the US over Ukraine.

The American media are already on the offensive. The Wall Street Journal bluntly accuses Berlin:

“Facing the two most consequential security threats to America and to the post-World War II democratic international order – China and Russia – Germany is no longer a credible ally. For Germany, cheap gas, car exports to China and keeping Mr. Putin calm seem to be more important than allied democratic solidarity.”

It is interesting to note that the three most bellicose countries are the three in the anglosphere – the US, the U.K. and Canada – countries who do not consume Russian hydrocarbons. On the contrary, in the case of the US and Canada, these two want to open the European market to North American liquified gas. A project already exists – the Three Seas Initiative – for modernizing infrastructures to accommodate American liquefied natural gas in twelve Eastern European countries.

In Quebec, the GNL Québec project for exporting Albertan natural gas through the Saguenay had Germany as its target market. A non-binding agreement had been signed at the time between the Belgian firm Fluxys for the construction of a terminal in Hamburg. The project was shelved because of the weak price of natural gas. But the price is rising strongly today, and the abandonment of Nord Stream II could very well unite the conditions for GNL’s renaissance.

One should also not forget that Canada signed an “energy partnership” with Germany for gas that will be transported by a new pipeline that crosses Quebec to a liquifying factory in Nova Scotia. The liquefied natural gas project Goldboro, worth $13-billion, is comparable to the GNL Saguenay project – the two could transport a similar quantity of natural gas.

In the event of a military confrontation between the US and Russia, Russia could close the tap of the gas pipeline that passes through Ukraine, or it could be sabotaged. One can easily imagine the oil industry, the Trudeau government, and their media relay begging to let their pipelines pass through in order that Europe “does not freeze in the dark.” And be assured, the two projects mentioned above will be presented as part of a plan for the “energy transition” that would prevent Germany and other European countries from using coal or nuclear power.

Biden’s comment to the effect that a “minor incursion” by Russia into Ukraine would not provoke a major response from a divided Europe has been much commented upon. His words were said to be “ambiguous,” coming from a “confused” president. But one cannot exclude the possibility that it was a trap being set for Putin. We should recall that the US laid a similar trap for Saddam Hussein, implying that the US would not intervene if he invaded Kuweit. And we know the rest.

Many articles have reminded us that US Secretary of State James Baker promised Mikhail Gorbachev that, in return for a unified Germany in NATO, there would be no expansion to the east of the alliance “by even one inch.” The promise was broken. The alliance moved more than a thousand kilometers east.

The US, whose Monroe Doctrine of 1823 condemns any European interference in the affairs of the American continent, is poorly placed to criticize Russia, a country that was invaded by Napoleon and Hitler across the planes of Ukraine, for wanting to defend its borders.

In an important article in the September-October 2014 issue of the prestigious journal Foreign Affairs entitled “Why the Ukraine Crisis Is the West’s Fault,” John Mearsheimer, professor at the University of Chicago, suggested making Ukraine a buffer state, like Austria was after the Second World War. Austria, one will recall, was not a member of NATO. A recent editorial by the Globe and Mail advocated for the same idea.

We, too, are making that proposal our own and we urge all people who love peace to support it and to demand the dismissal of Chrystia Freeland from the federal cabinet. •

Pierre Dubuc is the editor of L’aut’journal, that identifies itself as independent, worker (ouvrier), and popular.