The Geopolitics Behind Spiraling Gas and Electricity Prices in Europe

The current crisis of spiraling gas prices in Europe, coupled with a cold snap in the region, highlights the fact that the transition to green energy in any part of the world is not going to be easy. The high gas prices in Europe also bring to the forefront the complexity involved in transitioning to clean energy sources: that energy is not simply about choosing the right technology, and that transitioning to green energy has economic and geopolitical dimensions that need to be taken into consideration as well.

Gas wars in Europe are very much a part of the larger geostrategic battle being waged by the US using the North Atlantic Treaty Organization (NATO) and Ukraine. The problem the US and the EU have is that shifting the EU’s energy dependence on Russia will have huge costs for the EU, which is being missed in the current standoff between Russia and NATO. A break with Russia at this point over Ukraine will have huge consequences for the EU’s attempt to transition to cleaner energy sources. 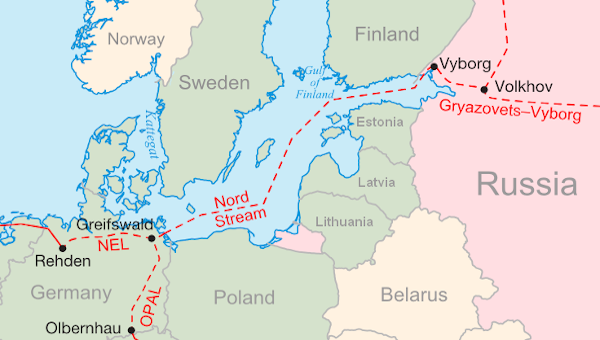 Emissions, Green Transition, and the Market?

The European Union has made its problem of a green transition worse by choosing a completely market-based approach toward gas pricing. The blackouts witnessed by people in Texas in February 2021 as a result of freezing temperatures made it apparent that such market-driven policies fail during vagaries of weather, pushing gas prices to levels where the poor may have to simply turn off their heating. In winter, gas prices tend to skyrocket in the European Union, as they did in 2020 and again in 2021.

For India and its electricity grid, one lesson from this European experience is clear. Markets do not solve the problem of energy pricing, as they require planning, long-term investments and stability in pricing. The electricity sector will face disastrous consequences if it is handed over to private electricity companies, as is being proposed in India. This is what the move to separate wires from the electricity they carry aims to achieve through Indian Prime Minister Narendra Modi’s government’s proposed amendment to the existing Electricity Act of 2003.

In order to understand the issues related to transitioning toward green energy, it is important to take a closer look at the current gas supply-related issues being faced by the European Union. The EU has chosen gas as its choice of fuel for electricity production, as it goes off coal and nuclear while also investing heavily in wind and solar. The argument advanced in favor of this choice is that gas would provide the EU with a transitional fuel for its low carbon emission path, as gas tends to produce less emissions than coal. It is another matter that gas is at best a short-term solution, as it still emits half as much greenhouse gas as coal.

As I have written earlier, the problem with green energy is that it requires a much larger capacity addition to handle seasonal and daily fluctuations that planners have not accounted for while advocating for switching over to clean energy sources. During winter, days are shorter in higher latitudes, and the world therefore gets fewer hours of sunlight. This seasonal problem with solar energy has been compounded in Europe with low winds in 2021 reducing the electricity output of windmills.

The European Union has banked heavily on gas to meet its short- and medium-term goals of cutting down greenhouse emissions. Gas can be stored to meet short-term and seasonal needs, and gas production can even be increased easily from gas fields with requisite pumping capacity. All this, however, requires advance planning and investment in surplus capacity building to meet the requirements of daily or seasonal fluctuations.

Unfortunately, the EU is a strong believer that markets magically solve all problems. It has moved away from long-term price contracts for gas and toward spot and short-term contracts – unlike China, India and Japan, which all have long-term contracts indexed to their oil prices.

Why does the gas price affect the price of electricity in the EU? After all, natural gas accounts only for about 20 percent of the EU’s electricity generation. Unfortunately for the people in the EU region, not only the gas market but also the electricity market has been “liberalized” under the market reforms in the EU. The energy mix in the grid is determined by energy market auctions, in which private electricity producers bid their prices and the quantity they will supply to the electricity grid. These bids are accepted, in order from lowest to highest, until the next day’s predicted demand is fully met. The last bidder’s price then becomes the price for all producers. In the language of Milton Friedman’s followers – who were known as the Chicago Boys – this price offered by the last bidder is its “marginal price” discovered through the market auction of electricity and, therefore, is the “natural” price of electricity.

For readers who might have followed the recently concluded elections in Chile, Augusto Pinochet – who was a military dictator in Chile from 1973 to 1990 – introduced the Constitution of 1980 in Chile and had incorporated the above principle in a constitutional guarantee to the neoliberal reforms in the electricity sector in the country. Hopefully, the victory of the left in the presidential elections in Chile and the earlier referendum on rewriting the Chilean constitution will also address this issue. Interestingly, it was not the former Prime Minister of UK Margaret Thatcher – as is commonly thought – who started the electricity “reforms” but Pinochet’s bloody regime in Chile.

At present in the EU, natural gas is the marginal producer, and that is why the price of gas also determines the price of electricity in Europe. This explains the almost 200 percent rise in electricity price in Europe in 2020. In 2021, according to an October 2021 report by the European Commission, “Gas prices are increasing globally, but more significantly in net importer regional markets like Asia and the EU. So far in 2021, prices tripled in [the] EU and more than doubled in Asia while only doubling in the US” [emphasis added].

The coupling of the gas and the electricity markets by using the marginal price as the price of all producers means that if gas spot prices triple as has been seen recently, so will the electricity prices. No prizes for guessing who gets hit the hardest with such increases. Though there has been criticism from various quarters regarding the use of marginal price as the price of electricity for all suppliers irrespective of their respective costs, the neoliberal belief in the gods of the market has ruled supreme in Europe.

Russia has long-term contracts as well as short-term contracts to supply gas to EU countries. Putin has mocked the EU’s fascination with spot prices and gas prices and said that Russia is willing to supply more gas via long-term contracts to the region. Meanwhile, in October 2021, European Commission President Ursula von der Leyen said that Russia was not doing its part in helping Europe tide over the gas crisis, according to an article in the Economist. The article stated, however, that according to analysts, Russia’s “big continental customers have recently confirmed that it is meeting its contractual obligations,” adding that “[t]here is little hard evidence that Russia is a big factor in Europe’s current gas crisis.”

The question here is that the EU either believes in the efficiency of the markets or it doesn’t. The EU cannot argue markets are best when spot prices are low in summer, and lose that belief in winter, asking Russia to supply more in order to “control” the market price. And if markets indeed are best, why not help the market by expediting the regulatory clearances for the Nord Stream 2 pipeline, which will ship Russian gas to Germany?

This brings us to the knotty question of the EU and Russia. The current Ukraine crisis that is roiling the relationship between the EU and Russia is closely linked to gas as well. Pipelines from Russia through Ukraine and Poland, along with the undersea Nord Stream 1, currently supply the bulk of Russian gas to the EU. Russia also has additional capacity via the newly commissioned Nord Stream 2 to supply more gas to Europe if it receives the financial regulatory clearance.

There is little doubt that Nord Stream 2 is caught not simply in regulatory issues but also in the geopolitics of gas in Europe. The United States pressured Germany not to allow Nord Stream 2 to be commissioned, and also threatened to impose sanctions on companies involved with the pipeline project. Before stepping down as the chancellor of Germany in September 2021, Angela Merkel, however, resisted pressure from Washington to halt the work on the pipeline and forced the United States to concede to a “compromise deal.” The Ukraine crisis has created further pressure on Germany to postpone Nord Stream 2 even if it means worsening its twin crises of gas and electricity prices.

The net gainer in all of this is the United States, which will get the EU as a buyer for its more expensive fracking gas. Russia currently supplies about 40 percent of the EU’s gas. If this stalls, the United States, which supplies about 5 percent of the EU’s gas demand (according to 2020 figures), could be a big gainer. The United States’ interest in sanctioning Russian gas supply and not allowing the commissioning of Nord Stream 2 has as much to do with its support to Ukraine as seeing that Russia does not become too important to the EU. 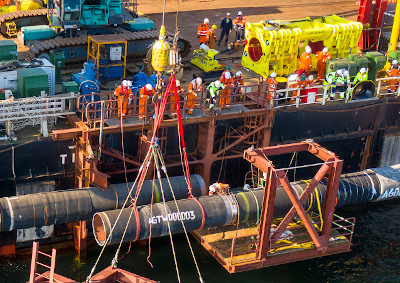 Nord Stream 2 could help form a common pan-European market and a larger Eurasian consolidation. Just as it did in East and Southeast Asia, the United States has a vested interest in stopping trade following geography instead of politics. Interestingly, gas pipelines from the Soviet Union to Western Europe were built during the Cold War as geography and trade got priority over Cold War politics.

The United States wants to focus on NATO and the Indo-Pacific region, as its focus is on the oceans. In geographical terms, the oceans are not separate but a continuous body covering more than 70 percent of the world’s surface with three major islands: Eurasia, Africa and the Americas. (Although in the formulation of British geographer Halford Mackinder, the originator of the world island idea, Africa was seen as a part of Eurasia.) Eurasia alone is by far the bigger island, with 70 percent of the world’s population. That is why the United States does not want such a consolidation.

The world is passing through perhaps the greatest transition that human civilization has known in meeting the current challenges posed by climate change. To address these challenges, an energy transition is required that cannot be achieved through markets that prioritize immediate profits over long-term societal gains. If gas is indeed the transitional fuel, at least for Europe, it needs long-term policies of integrating its gas grid with gas fields, which have adequate storage. And Europe needs to stop playing games with its energy and the world’s climate future for the benefit of the United States.

For India, the lessons are clear. Markets do not work for infrastructure. Long-term planning with state leadership is what India needs to ensure supply of electricity to all Indians and ensure the country’s green transition – instead of dependence on electricity markets created artificially by a few regulators framing rules to favor the private monopoly of electricity companies. •