At the 2015 Paris COP 21 climate conference Justin Trudeau pledged his newly-elected government would help “to limit global average temperature rise to well below 2 degrees Celsius as well as pursue efforts to limit the increase to 1.5 degrees.”

The strategy adopted was two-pronged and contradictory on its face: implementing gradual carbon price increases through carbon taxes or cap-and-trade mechanisms while building more pipeline capacity to boost exports of fossil-fuel resources, especially the products of Alberta’s tar sands.

As environmentalists noted, the approach was inherently futile. Carbon taxes – contingent on provincial government consent – assumed higher costs would induce businesses to introduce less climate-destroying technology and practices. And provincial consent was dependent on the federal commitment to pipeline development, which inevitably would promote further fossil fuel exploration and production.

From the outset, Ottawa has faced opposition to carbon taxes from some provinces, which fear such market-based mechanisms will discourage private business investment. And mass popular opposition accompanied by the global downturn in resource prices has already led to TransCanada’s cancellation of its $15.7-billion Energy East project and Ottawa’s nixing of Enbridge’s Northern Gateway pipeline. Although U.S. President Donald Trump has now reversed Obama’s stop to Keystone XL, its future is still in doubt in the face of opposition from U.S. environmental activists.

That leaves Kinder Morgan’s plan to duplicate its existing Trans Mountain pipeline. It entails a $7.4-billion duplication of an existing pipeline from Alberta, with a three-fold increase in capacity, that would carry tar sands bitumen to a refinery in the Vancouver suburb of Burnaby. From there tanker traffic to hoped-for Asian markets would increase from a current five boats per month to an estimated 34 threading their way through coastal tidal straits. The plan has become the linchpin of the Trudeau government’s hope to win support for its approach from an Alberta government eager to get its petroleum to tidewater, and which has hinged its carbon tax on completion of the Trans Mountain project.1

The economic prospects behind the Kinder Morgan project are suspect, given the declining prospects globally for new fossil-fuel export markets.2 More importantly, it is facing mounting protests from environmental and First Nations activists. In recent weeks, dozens of demonstrators at the Burnaby refinery have been arrested on trespassing charges. The newly-elected minority NDP government, dependent on support from the Green party, which opposes Kinder Morgan, has joined in legal challenges to the project. This has brought the B.C. government into conflict with Alberta’s, likewise held by the New Democratic Party.

However, both governments have been boosting fossil-fuel exports.

B.C. premier John Horgan says he will limit the province’s carbon tax rules applying to a $40-billion Shell Canada-led LNG project in Kitimat. He prepared the way for that project when he recently gave the go-ahead to completion of the $10.7-billion Site C dam in northern B.C., which the NDP had campaigned against prior to its election last year. The dam will provide electricity to the Kitimat project.

Alberta premier Rachel Notley has been negotiating with Ottawa to exempt tar-sands projects from federal climate reviews. B.C.’s support of the Kitimat LNG project while opposing Trans Mountain as environmentally unsafe is “hypocrisy,” she notes, because it will be processing shale gas extracted in Alberta.

Meanwhile, the OECD warned in December that “without a drastic decrease in the emissions intensity of the oilsands industry, the projected increase in oil production may seriously risk the achievement of Canada’s climate mitigation targets.” The report noted that Canada has the fourth largest greenhouse gas emissions of the OECD’s 35 developed national economies. As for carbon taxes, it said, Canada’s regime “is far below that of other OECD member countries.”

Then, on April 8 Texas-based Kinder Morgan announced it was suspending “non-essential” spending on the Trans Mountain project and would cancel it altogether if by May 31 it was not “guaranteed” the project could proceed despite the B.C. opposition.

The announcement produced a flurry of panic-stricken reaction from Canadian business elites, their media, and the Alberta and federal governments. Surely, it was exclaimed, Ottawa has the constitutional authority to override B.C.’s opposition – especially in a matter so eminently in the “national interest,” as Trudeau and Notley constantly reiterate. To ensure the project proceeds, both governments have even indicated interest in buying a stake in Kinder Morgan, if not the entire company, investing billions of taxpayer dollars in this climate-destroying enterprise.

However, their dilemma is that even federal “guarantees” of the project will not insulate it from popular protest. In fact, it will only generate more opposition. The fight over Kinder Morgan’s Trans Mountain project is far from over.

And there are some huge stakes involved, much greater than the fate of governments and their supposed “climate change” strategies. The broader issues are eloquently set out in a powerful statement authored by two First Nations chiefs and reproduced below. Their promise of militant direct action is redolent of the “blockadia” advocated by Naomi Klein in her best-selling book This Changes Everything: Capitalism vs. The Climate. And it echoes the Leap Manifesto, co-authored by Klein, which proclaims: This leap to “a country powered entirely by renewable energy… must begin by respecting the inherent rights and title of the original caretakers of this land,” the Indigenous communities that “have been at the forefront of protecting rivers, coasts, forests and lands from out-of-control industrial activity.” •

If Ottawa Rams Through Trans Mountain, It Could Setup an Oka-like Crisis

As the federal and Alberta governments continue to pull their hair out over the B.C. government’s stand against Kinder Morgan’s Trans Mountain pipeline expansion and tanker project, it’s important to point out, as we’ve been doing for years, that the pipeline company doesn’t have the consent of all First Nations along the route. In fact, many of them are strongly opposed to the project.

Kinder Morgan’s recent announcement that it is stopping all but essential spending proves that its shareholders are starting to understand the degree and depth of the Indigenous-led opposition movement to this pipeline project.

The Treaty Alliance Against Tar Sands Expansion is made up of 150 Indigenous Nations in Canada and the United States, dozens of which are located along the Kinder Morgan pipeline route, with many of them having launched legal actions against the Kinder Morgan project.

Further, Indigenous Nations are supported by a quickly growing and broad-based network of support from allied Canadians who understand the existential threat that humanity faces from climate change and who are ready to stand up against the injustices still carried out today against Indigenous people.

More than 20,000 people have signed the Coast Protectors pledge to do whatever it takes to stop the pipeline. Thousands took part in a March 10 solidarity rally at the Kinder Morgan gates on Burnaby mountain.

Prime Minister Justin Trudeau’s government has a decision to make. It can cut its losses and realize it simply made a mistake in approving the project. Or the Trudeau government can double down on its current path. But Canadians should be very clear-eyed about what that represents. It represents more than a failure of climate leadership. It means going back to the Stephen Harper days when Canada’s reputation on the climate file was mud.

Importantly, it also means going back to colonial-era relations with Indigenous people. In fact, if the federal government tries to ram through this pipeline, it could mean going back to one of the darkest times in modern Canadian history: the Oka standoff with the Mohawk Nation.

We just witnessed the ugly and shameful crackdown in the United States on the peaceful anti-pipeline protests at Standing Rock.

We don’t believe that’s the Canada that most Canadians want to live in. It would be a cruel joke indeed if, in this era of “reconciliation,” Canada instead repeats the mistakes of the past. 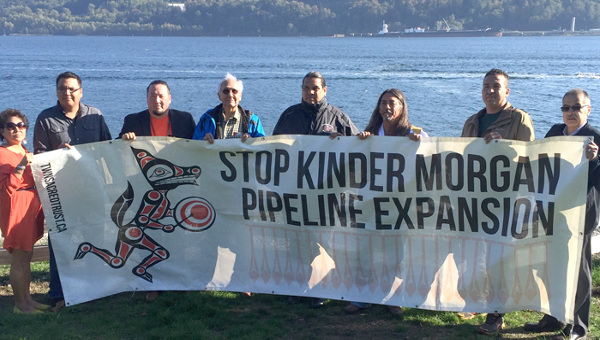 This is a learning moment for Canada. For far too long, governments and industry thought they could ignore Indigenous people by paying lip service to consulting us all the while doing what they wanted to do anyway.

Canadians are starting to grasp that there are governments and jurisdictions on this great land besides the provinces and the federal government. Indigenous peoples possess the inherent right to govern our territories. Pursuant to that inherent right, you need our free, prior and informed consent to develop our lands, especially when we are talking about a high-risk project such as Kinder Morgan that poses a real risk to those lands and waters and climate.

This is something the Supreme Court of Canada recognized in the historic 2014 Tsilhqot’in decision and it is the foundation of the United Nations Declaration on the Rights of Indigenous Peoples, which the federal government has agreed to implement.

The other learning moment is that this beleaguered pipeline is forcing Canadians of all ages from all walks of life to begin to imagine a world that is not so reliant on oil. We should be racing as fast as we can to get off oil instead of producing even more of the dirtiest, most polluting kind from the Alberta oil sands.

This is not some typical debate with many sides to it – there’s really just two: right and wrong. Collective survival or collective suicide.

Finally, no one should see this as a constitutional crisis. On the contrary, this is our Constitution3 working, at least in practice, with Indigenous people acting as real decision makers on their territory. At the same time, you’re seeing beautiful acts of real reconciliation with Canadians standing up for our rights and trying to make this country a more just place. And we are finally seeing the kind of climate action that Canada needs and that the Trudeau government refused to take when it approved this pipeline.

The real constitutional crisis will occur if Mr. Trudeau chooses to ignore our constitutionally protected Aboriginal Title and Rights and Treaty Rights, and tries to ram through the pipeline – putting a lie to all his promises of reconciliation and setting Canada up for another catastrophic crisis on the same level as Oka. •

This statement by Stewart Phillip and Serge Simon published on the Globe and Mail website.

Stewart Phillip is Grand Chief of Okanagan Nation and president of the Union of B.C. Indian Chiefs.

Serge ‘Otsi’ Simon is Grand Chief of the Mohawk Council of Kanesatake.