For several weeks and until very recently, Western media have sounded the alarm about a threatened Russian invasion of Ukraine. The stationing of Russian troops on Ukraine’s border, now ended, appears, in fact, to have been a response to increasing belligerent activity in the area on the part of Kiev’s armed forces. Kiev was using the ‘threat of invasion’, unquestioningly parroted by the main Western media, to pressure NATO into accepting it into the pact, an unlikely event that would have had dire consequences for world peace. Failing that, Kiev was hoping at least for fresh loans and grants and increased arms from its Western patrons.

There is now some very tentative hope that Germany and France may start pushing a little bit harder within their ‘cluster’ approach to the Minsk Protocol to make Ukraine finally implement at least some of the political provisions that all parties signed in 2015.1 This is happening after six years of ignoring Ukraine’s practical sabotage of the Minsk accords and only after Russia’s recent ‘saber-rattling’.2

I am not even sure that is anything more than rumors and wishful thinking stand behind those hopes. However, talk has begun suggesting that pushing Ukraine to implement the ‘Russia-imposed’ Minsk accords may cause a ‘civil war’ in Ukraine. That talk repeats the tropes of the right-wing nationalists’ ‘anti-capitulation’ campaign of 2019, organized after President Volodymyr Zelenski achieved some major successes in the ceasefire, and in the exchange of the PoWs and political prisoners, as well as agreeing to the ‘Steinmeier formula’.3 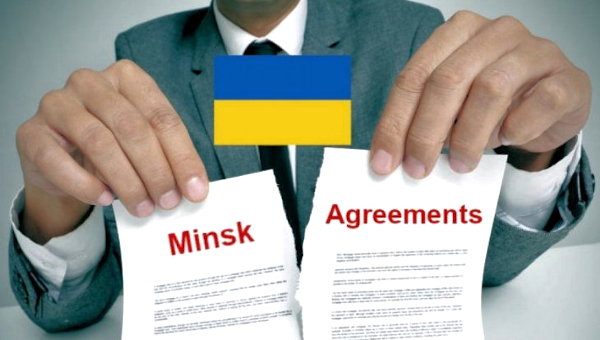 Two highly problematic issues arise with this talk. First, it ignores the fact that any stable solution to the war requires either massive disenfranchisement, political cleansing, and deportation of the ‘collaborationist’ population from the breakaway Donbass region or, alternatively, the transformation of Ukraine into a radically more culturally, ideologically, and politically pluralistic country.

The latter requires recognition and acceptance of the ‘wrong Ukrainians’ (who are roughly half of the population of pre-war Ukraine) as a legitimate part of the Ukrainian nation with a legitimate right to be represented in the public sphere and in politics. Reduction of the Minsk accords by the ultra-nationalists to ‘capitulation’ to the ‘Russia-imposed’ demands typically ignores the need for the pluralistic transformation of Ukraine, for which the Minsk accords are a step forward and a political tool.

Second, not even touching on the discussion as to whether what is going on in the country is already a civil war, the talk about some inevitable ‘civil war’ escalation is a sort of joke in-itself. On the one hand, it implies that there are indeed deep contradictions within Ukrainian society, so deep that it is on the brink of civil war and disintegration because of the international obligations of the Ukrainian state.

On the other hand, this talk always reminds me of how the extreme right discusses LGBT issues and public events. Quite often, they do not articulate any direct threats but say that, since LGBT issues are so unpopular, they may ‘provoke’ society, and ‘society’ may respond with violence. So, better not to ‘provoke’ society in order to avoid the ‘inevitable’ violence.

These rhetorical strategies are also, quite ironically, reminders of the defense of Russian annexation of Crimea, the sadly famous Putin-verstehen (more or less “sympathetic understanding”). Putin warned that if Ukraine joins NATO, it joins it without Crimea. So now it is allegedly not Russia’s fault.

I think we should stop this verstehen’ism of Ukrainian nationalist ‘civil society’. This is a numerically minor, although well-organized, group that dominates the Ukrainian public sphere. It has achieved monopoly status in the international representation of the whole society with the complicit help of much of the Western media. However, the ideas of the dominant political group are not really popular within Ukrainian society at large.

A nationalist revolt is a nationalist revolt. It won’t lead to any ‘inevitable’ civil war escalation if it is dealt with in a timely and proper manner, like other countries that now finally recognize the emerging right-wing threats have done. This can be prevented, especially if it is not fueled but clearly opposed and condemned by the foreign powers upon which Ukraine as a whole and its ‘civil society’ are now so very dependent. •

Volodymyr Ishchenko is a political activist in Ukraine and editor of the review Spiln’ya. He is a research associate at the Institute of East European Studies, Freie Universität Berlin.