Delivery Workers Rising Up Against Exploitation

On February 22, 2019, at 6 p.m., a car crashed into Servio Hernández’s motorcycle. Hernández, a Venezuelan migrant in Chile, was hit while he was in the middle of making a delivery for PedidosYa, a branch of the German multinational company Delivery Hero. When Hernández arrived at the hospital, the first thing he did was ask the medical staff to let his supervisor know about the accident. “There is nothing we can do for him,” the supervisor told the doctor. The supervisor turned off his phone and blocked Hernández from being able to access the PedidosYa app.

Servio Hernández is one of the millions of workers around the world, from Chile to South Korea, who hustle to deliver food and other products to people’s homes. If conditions for these delivery workers were terrible before the pandemic, they have only become worse during the ongoing pandemic. A study by Friedrich-Ebert Stiftung, a nonprofit German foundation, titled “Global Labour Unrest on Platforms” shows an increase in protests by workers like Hernández across the world. “[S]trikes have been sector-wide across countries,” the study reports. “The pandemic provided the impetus and platform for workers to raise their voices against underlying structural injustices of their platform work.”

In Latin America, companies – including Delivery Hero – have registered a 400 per cent increase in home delivery food sales from 2014 to 2019, according to a report by Euromonitor International, a market research company. Profits for these firms have skyrocketed, but working conditions for the delivery workers have plummeted. Hernández is one of these workers, and – like others in Latin America – he is agitating for more rights and for unionization. 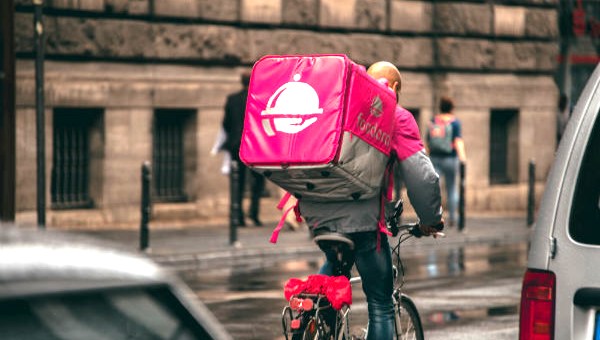 Logging In, and Logging Out

When the supervisor blocked Hernández’s access to the PedidosYa app, he cut off his ability to work. He could not be assigned orders for delivery or for pickup, and so he effectively “disappeared as a worker,” he told me. When a gig worker is logged out from a delivery app, which provides a steady stream of employment and income for the worker, it means the worker can no longer earn money from the platform. If a worker suffers an accident while returning home after delivering their last order for the day, the company does not consider it as an accident at work because the worker had disconnected from the app. If the worker has to stop to use the bathroom on the way to making a delivery or has to take a break from the job to tend to a family member, then the worker can ask the supervisor to log them off from the app for that duration; the worker has to log in on the app to show they are back at work again. Supervisors can block the worker at will, which is tantamount to being fired. They can even erase the worker’s entire history from the system, erasing their existence as a worker. This is exactly what they did with Hernández on the day of the accident in 2019.

After 10 hours in the hospital, Hernández returned home at 5 a.m. on February 23, 2019. He could not leave his bed for two months because of the nature of his injuries. The company did not contact him. He received no benefits. In April 2019, he asked the company if he could return to work. The supervisor on duty logged Hernández back into the system. When a worker becomes part of the system, they are required to buy and use company-branded products, such as a uniform and the delivery box that is attached to their own personal bicycle or motorcycle. In what was supposed to be a goodwill gesture, the supervisor told the employee in charge of this equipment to “give [them] to him for free” since “he is returning after an accident.”

A few months later, in December 2019, Hernández saw that his income was lowered. He realized that for the same number of deliveries he had been doing a month earlier, he was now making 20 per cent less. This was despite the fact that some of the distances he was now covering were longer. The company – it turned out – had changed the conditions of work without any consultation with the workers and without giving them any notification regarding these changes. After the accident and this change of terms of service, Hernández knew that he had to do something.

Like food delivery workers around the world, Hernández decided to help build a union. Along with others, Hernández began to build Riders Unidos Ya Chile, a community of delivery workers who want to have their rights recognized by multinational companies.

Hernández recognizes it is a good thing that Riders Unidos Ya was already established when the pandemic was just beginning. Working conditions during the pandemic have worsened. A recent report by the International Labour Organization, “World Employment and Social Outlook,” acknowledged that the COVID-19 pandemic is “exposing the risks and inequalities for workers, particularly for those engaged on location-based platforms.”

Meanwhile, Hernández described these conditions to me in a way that would sound familiar to food delivery workers anywhere in the world. “These delivery companies play with the workers’ sense of stability of working conditions,” he told me. “They find ways to ‘change the rules of the game’ and modify contracts at will, always to the advantage of [these companies] and to our detriment. In short, they make us work more and earn less. Before the pandemic, we had guaranteed working hours: the hours you were connected to the application, even if there were no orders during that time. [But as] demand increases [especially during the pandemic], instead of improving workers’ conditions, [the delivery companies] make them worse: they suspend the guaranteed hours and only pay you for delivered orders. That makes us modern slaves, who depend on being connected [24-7] to an application. Distances increase, [workers’ hourly] rates decrease and, in addition, you are tied to the mood of the customer.”

He emphasized how time-sensitive their work is, adding, “If a person does not come down immediately to receive their order, that time is not considered by anyone. It becomes a matter of respect, of consideration for the other person. We are workers, human beings; and some customers, and the owners of these companies, feel entitled to treat us like dogs.”

The abrupt pandemic growth of delivery services keeps these workers in legal limbo. Hernández told me that to date, none of these companies has been audited in Chile. He knows this because his organization – Riders Unidos Ya – has two lawsuits in progress against PedidosYa. The complaints have been filed by individuals since legally the workers do not have an employment relationship with the company; they are “self-employed” or freelance workers, which means that they cannot form a union.

Delivery workers across the planet face the same problem of being off the books as workers, but on the books as those who labour for the company. Workers are fighting back by filing individual court cases against these multinational companies. In Spain, in 2020, Isaac Cuende won a lawsuit against Glovo, another multinational food delivery app company. The Supreme Court used the term “false self-employed” (falsos autónomos), which refers to the practice of not recognizing delivery workers as workers who are entitled to labour rights, including the right to form unions.

Delivery workers in Argentina have organized themselves in a wide range of groups such as Agrupación de Trabajadores de Reparto, Glovers Unidos Argentina and Redapps Unidos Argentina, and many of these groups called for an international strike of food delivery workers on April 22, 2020. They were joined by organizations from across Latin America and in Spain. In October 2020, many of these groups held their fourth strike, in which workers joined from Latin America and Spain as well as Europe, Asia, and North America. The goal of this process is to push against the delivery app employers – to force them to put workers’ safety and interests before profit margins and accept labour standards and labour rights.

Hernández is part of this process. As an active delivery worker and a leader of his organization, he recognizes that it will not be easy. “We workers are seen as disposable,” he tells me. “We always bear the brunt, and the companies always get the impunity.” •