Twenty Years of US Occupation Was Brutal in Afghanistan: And So Will Be the Exit

When a reporter in early July asked Joe Biden a question about the war in Afghanistan, the US president sniped back, saying, “I want to talk about happy things, man.” Biden revealed, perhaps unintentionally, that the situation in Afghanistan is anything but a happy topic. It might have been one of the most revealing responses from a sitting president about the longest-running war in modern United States history.

The president shifted focus, saying, “The economy is growing faster than anytime in 40 years, we’ve got a record number of new jobs, COVID deaths are down 90 per cent, wages are up faster than any time in 15 years, we’re bringing our troops home.” The war’s end is merely the icing on the cake he is seemingly gifting the American public: an end to a war in addition to peace, prosperity, and health at home (even if such achievements are more marketing than reality).

At the very least, one can give Biden credit for formally ending the US role in the war, even if he had nothing substantive to say about the devastation we have wrought over the years. Members of the Congressional Progressive Caucus said they “commend President Biden for fulfilling his commitment to ending the longest war in American history” and took his withdrawal of troops to mean that “there is no military solution in Afghanistan.” (They made no mention of Biden’s role during the Obama presidency in prolonging the war.) 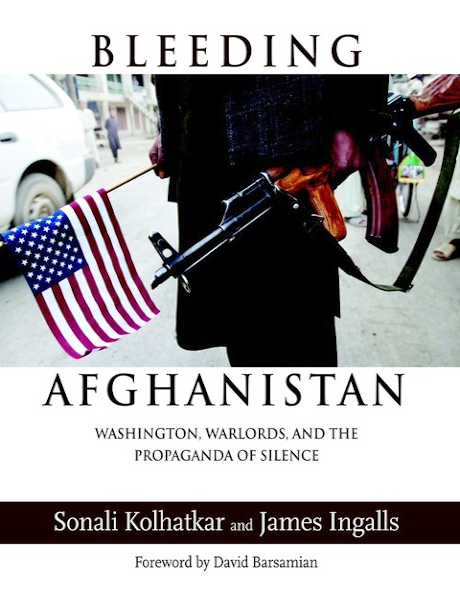 Opponents of the war have known since 2001 that there is no military solution to the US-sponsored fundamentalist violence that had plagued Afghanistan at the time. More such violence – which is largely what the US offered for nearly 20 years – only made things worse.

In announcing the war’s end and pivoting to what he deemed were “happy” topics, Biden fed the “propaganda of silence” that my co-author James Ingalls and I referred to in the subtitle of our 2006 book Bleeding Afghanistan: Washington, Warlords, and the Propaganda of Silence. There has long been a deliberate effort to downplay the US’s failures and paint a rosy picture of a war whose victory has always been just around the corner. But there is no happy ending for Afghans, and there was never meant to be.

Afghans, already weary of never-ending war in 2001, were promised democracy, women’s rights, and peace. But instead, the US offered elections, a theoretical liberation of women, and an absence of justice while championing corrupt armed warlords and their militias. In trying to end the debacle, American diplomats refused to involve the (admittedly flawed) Afghan government that they had helped to build as a bulwark against fundamentalism, and instead engaged in peace talks with the Taliban – the same “enemy” of democracy, women, and peace that the US had spent nearly two decades fighting. Now, as the fundamentalist fighters claim more territory than they have controlled in decades, and the Taliban have predictably begun reimposing medieval-era restrictions on women, ordinary Afghans, including women, are taking up arms to fight them. Was this the liberation that the US promised Afghan women?

Even the manner of withdrawing American troops was as shameful as the mess the US is leaving behind. The Associated Press reported that the US military abandoned Bagram Airfield in early July in the dead of night, failing to properly coordinate with the Afghan army commanders who were expecting to take over. After they left, a “small army of looters” rifled through the millions of taxpayer-funded items left behind by American troops including small weapons and ammunition. Later on, one Afghan soldier bitterly told the AP, “In one night, they lost all the goodwill of 20 years by leaving the way they did, in the night, without telling the Afghan soldiers who were outside patrolling the area.”

Afghans have every reason to be cynical. “The Americans leave a legacy of failure, they’ve failed in containing the Taliban or corruption,” said one shopkeeper in Bagram. Another auto mechanic told Reuters, “They came with bombing the Taliban and got rid of their regime – but now they have left when the Taliban are so empowered that they will take over any time soon.”

Phyllis Bennis, director of the New Internationalism Project at the Institute for Policy Studies, explained to me in an interview that there is a likelihood of civil war breaking out but warned, “I think it would be a mistake to see it as a new civil war.” Bennis, who is the author of several books including Understanding ISIS and the New Global War on Terror and Ending the US War in Afghanistan, added, “This would be in a sense a continuation of the existing civil war.”

By that, she meant that for the past 20 years, the US has essentially been inserting itself into an existing civil war between the Taliban and fundamentalist Northern Alliance warlords who had enjoyed previous US support. The Taliban had won that war in 1996, “not because of the extremism of their definitions of religious law, but despite that,” said Bennis. But in 2001, after the September 11 attacks, the US restarted that civil war by bombing Afghanistan and bringing the Northern Alliance warlords back into power along with a puppet government in Kabul.

More than 200,000 lives and $2-trillion later, the US is leaving the same basic dynamic largely in place. Most wars are a farce. But if ever there was a textbook case to be made about the futility of war, the 20 years of US militarism in Afghanistan offers a shining example.

Former Defense Secretary Leon Panetta in an opinion piece on CNN.com repeated the same list of tired and empty achievements that other defenders of the war have made: “the establishment of a democratic government, expanded rights for women, improved education, and successful operations to decimate core Al Qaeda and bring Osama Bin Laden to justice.” But then he went on to cite all the ways in which these seeming successes have unraveled and that the only way to prevent the Taliban from fomenting future violence is to “continue counter terrorism operations.”

Afghans Will Find Own Way

The narrow spectrum of actions that American elites have offered on Afghanistan ranges from Biden’s idea to withdraw forces (while pretending everything is happy), to an unending military presence as per Panetta. In other words, Afghans were never meant to have their happy ending. War and militarism do not offer such a solution. One cannot bomb a nation into democracy, women’s rights, and peace. Those things are built internally by civil-society-led institutions and networks free from violence, and that are engaged, supported, funded, and nurtured. Over 20 years, the US cared little for such things.

To its credit, the Congressional Progressive Caucus demanded from Biden that in addition to withdrawing troops, “The US must support peace and reconstruction efforts in Afghanistan.” In their statement, lawmakers said, “we encourage the Biden administration to quickly put in place a multilateral diplomatic strategy for an inclusive, intra-Afghan process to bring about a sustainable peace.” But there appears to be little appetite for such solutions within the Biden administration. And Americans remain largely blissfully ambivalent either way.

If only Biden, Panetta, and others had the courage to admit that the war in Afghanistan was ultimately an exercise in American imperialist hubris. It was an expensive and deadly smackdown of a poor nation that dared to host a terrorist faction that attacked the US, a costly message to the world that an attack on the US will not go unpunished. That is all it was designed to do, and when histories of the war are written, one can only hope that this stark fact is made crystal clear.

Most ordinary Afghans understand this even if Americans don’t. “We have to solve our problem. We have to secure our country and once again build our country with our own hands,” said Gen. Mir Asadullah Kohistani, the new commander of Bagram Airfield. Sayed Naqibullah, the shopkeeper by interviewed Reuters, echoed this claim, saying, “In a way, we’re happy they’ve gone… We’re Afghans and we’ll find our way.” •