Ending the Afghanistan War? Almost Everything Biden Said Was a Lie

President Joe Biden, in announcing an ostensible end to the US war in Afghanistan, is continuing his streak of paying eloquent lip service to progressive causes while maintaining the implied status quo. In a televised address from the White House on April 14, Biden said, “it’s time to end America’s longest war. It’s time for American troops to come home.” But just a day later, the New York Times reported without a hint of irony that “the Pentagon, American spy agencies and Western allies are refining plans to deploy a less visible but still potent force in the region.” This means we are ending the war, but not really.

US military leaders and generals gave a much more accurate assessment of the war’s future in the days following Biden’s speech. Former CIA officer and counterterrorism expert Marc Polymeropoulos explained to the Times, “What we are really talking about are how to collect intelligence and then act against terrorist targets without any infrastructure or personnel in the country other than essentially the embassy in Kabul.” In other words, the US wants to wage a remotely run war against Afghanistan, as it has done in other nations like Yemen, Syria, and Somalia. 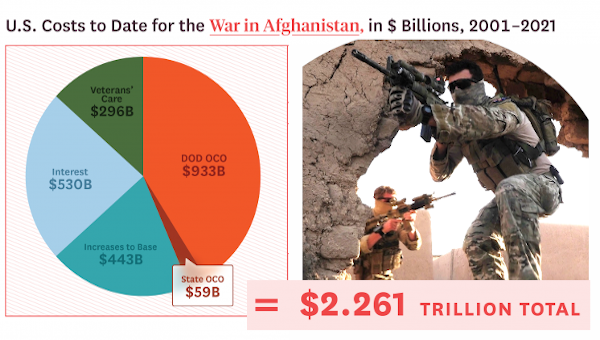 Defense Secretary Lloyd Austin added his two cents, underscoring the US’s ability to wage war without troops on the ground, saying, “There’s probably not a space on the globe that the United States and its allies can’t reach.” Marine Corps Gen. Kenneth McKenzie Jr. echoed this sentiment in ominous terms on April 20 at a House Armed Services Committee hearing, saying, “if we’re going to strike something [in Afghanistan], we’re going to strike it in concert with the law of armed conflict and the American way of war.”

One may suppose that this “American way of war” is unlike a traditional war where troops occupy a country – a type of war that is generally deeply unpopular with the US public. By publicly promising a withdrawal of troops while quietly continuing airstrikes, Biden ensures that US violence against Afghanistan remains invisible to the American people.

Biden also failed to mention in his speech that there are tens of thousands of private military contractors employed in Afghanistan. According to the Times, “[m]ore than 16,000 civilian contractors, including over 6,000 Americans, now provide security, logistics and other support in Afghanistan.” The Times did not see fit to ask how the war can be declared over if mercenaries remain on the ground, nor how Biden can declare the war as ending if airstrikes will continue.

Dr. Hakeem Naim is an Afghan-American lecturer in the Department of History at the University of California, Berkeley; he was raised in Afghanistan and has lived in multiple countries as a refugee and immigrant before moving to the US. In an interview, he explained what Biden refused to mention: that “the US created chaos by supporting the most corrupt elite groups and created a mafia-system of economy run by the drug lords, warlords and contractors.” Worst of all, “the Taliban is back in power,” he said, implying that Afghanistan is essentially back where it started in 2001.

Fahima Gaheez, the director of the Afghan Women’s Fund, concurred with Naim, saying that “the US made a bigger mess in Afghanistan and lost too many opportunities to help Afghans to fix the problems that the US itself created 40 years ago.” She was referring to the CIA arming of Afghan mujahideen warlords against the Soviet Union, which invaded and occupied Afghanistan in the late 1970s.

In other words, our destructive involvement in Afghanistan predates by decades the post-9/11 invasion and occupation that continues to this day. Instead of owning up to the havoc we have wreaked in Afghanistan, Biden wants credit for withdrawing US troops from a war we have been involved in since the 1970s (not 2001), and that will most certainly not end by September 11, 2021.

Today, according to Dr. Naim, “the CIA has thousands of militias operating in Afghanistan, and there are still thousands of contractors whose objective Afghans don’t even know.” He summarized, “It’s going to be very naive and simplistic to think that the war will end.” Gaheez, who has traveled to Afghanistan numerous times to oversee humanitarian aid projects, has seen firsthand what the private contractors represent. She said, “they have CIA clearance and weapons, and they can be used as a partial military force.” In fact, the private military contractors outnumber US troops by so much that more contractors than soldiers have died. The special inspector general for Afghanistan reconstruction (SIGAR), a watchdog agency, warned that the pullout of contractors could have worse consequences than the withdrawal of troops.

The most disingenuous aspect of Biden’s speech was his insistence that the US had a simple goal in Afghanistan and met it. He said, “We went to Afghanistan in 2001 to root out al Qaeda, to prevent future terrorist attacks against the United States planned from Afghanistan,” and that “[o]ur objective was clear.” But the US did far more than that. It cobbled together a puppet government, foisted its idea of democracy onto a people struggling with US-backed armed warlords and thus ensured that secular democratic movements remained weak. It poured billions into fighting a drug war, only to end up encouraging drug production. It defeated the Taliban only to choose the rebel group as a partner for peace. Along the way, it killed more than 40,000 Afghan civilians – most likely an underestimate.

Today, although there is an Afghan government in power headed by President Ashraf Ghani, it is entirely dependent on the US for legitimacy and remains at the mercy of Taliban-led violence as well as armed fundamentalist warlords that successive American administrations and the government itself have legitimized.

But none of that was important enough for Biden to mention. Instead, the president claimed that in 2001, “The cause was just… And I supported that military action.” Then, encompassing the disastrous war into a single simplistic sentence, Biden claimed, “We delivered justice to bin Laden a decade ago, and we’ve stayed in Afghanistan for a decade since.”

With these words, the president offered a tantalizing characterization of the Afghan war: that the US intended to root out terrorism, that the task was achieved, and that we should have left soon after. It is a comforting thought to reimagine the Afghanistan war through such a benevolent lens – as if our only gaffe was that we stayed too long. Biden also made absolutely no mention of the fact that bin Laden was captured and killed in Pakistan, not Afghanistan.

Missing from the political dialogue over the war is just how obscenely we have paid to fight this futile 20-year battle that will leave Afghanistan in the hands of a corrupt and ineffectual government and a newly empowered Taliban force and other warlords and militias. According to the Costs of War project run by Brown University, American taxpayers forked over more than $2.2-trillion for a war in Afghanistan that Biden wants us to believe achieved its objective by assassinating bin Laden a decade ago in Pakistan.

At a time when inequality continues to rise in the US and politicians claim there is no money to fund infrastructure projects or a Green New Deal or Medicare for All, the costs of the Afghan war will continue to rise in both economic and human terms. Taxpayers will continue to foot the bill for airstrikes and private contractors with no end in sight. Afghans will continue to suffer and die.

Seen through such a lens, Dr. Naim gave an accurate impression of Biden’s speech as simply, “a colonialist and orientalist justification of an intervention.” •