The Geopolitics of Vaccine Apartheid

On 22 April, Earth Day, US President Joe Biden convened a summit on the climate crisis with the heads of several important countries. While this was an attempt to bring the US back into the climate crisis multilateral game and to lead from the front on a global challenge, the hypocrisy of this move was not lost on the global public. At the time of the convening of this summit, 223.6 million vaccine doses covering 35.2% of the US population were rolled out. Whereas in contrast, Nigeria with a population of 201 million had only 1.2 million people vaccinated. The Biden Administration cannot be asking the world to act collectively on the climate crisis when it is failing to ensure vaccine intellectual property is not made available to countries in the global south.

The US is not alone in prioritizing its own population for vaccines and defending profit making by pharmaceutical companies. The UK has also stockpiled 400 million vaccines, 6 doses for nearly each person living in the UK, with a population of 67.61 million. Together with the US, the UK also refuses to accept the need for a TRIPS-waiver (Trade-Related Aspects of Intellectual Property Rights) in the WTO to ensure vaccine intellectual property and knowhow is transferred to countries in the global south to boost manufacturing for safe and effective vaccines for all. Leading Western countries are essentially turning their back on a just and global problem-solving approach to a common challenge. 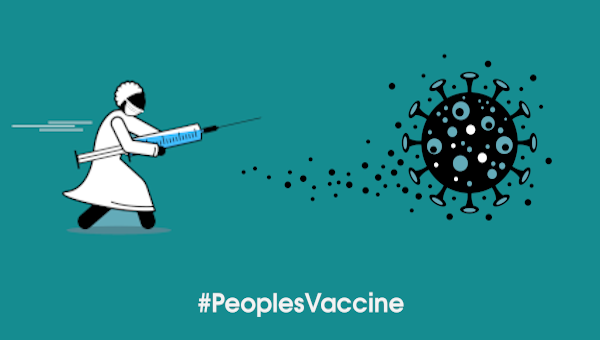 For Russia and China, the COVID-19 crisis is being used to boost political legitimacy through their vaccine diplomacy efforts. They also are not willing to share intellectual property with the global south and neither have they publicly committed to make their vaccines open source. In the African context, China has pushed its Sinopharm vaccine on to the agenda with several African countries. However, up to this moment not a single African country has a serious vaccine rollout campaign. At the end of December, 2020, Oxfam estimated that 70 poor countries will only be able to vaccinate one in ten inhabitants in 2021. In Africa 25% of vaccine supply will be covered by COVAX, 11% by the African Union while the vast majority of 64% will not have vaccinations in 2021. This is vaccine apartheid with Africa reflecting the moral and political crisis of such disparities.

At the same time, leading pharmaceutical companies are warning the US administration that overriding patents will handover sensitive mRNA (messenger ribonucleic acid) technology to Russia and China. This argument merely entrenches geopolitical game-playing to protect the profits of pharmaceutical corporations. Moreover, if the US is committed to a just recovery from COVID-19 for the entire world, it has to take the TRIPS waiver seriously in the WTO. Thus far Biden’s top trade official, Katherine Tai, has signaled strongly to pharmaceutical companies and the WTO that their top priority is ‘saving lives’ and that the US was serious about boosting production and equitable distribution of vaccines. However, this rhetoric has not translated into the TRIPS waiver actually being secured.

It is in this context the victories of the HIV/AIDS struggles in achieving a TRIPS waiver are crucial for progressive civil society. Activists and movements in India, Brazil and South Africa achieved such a breakthrough in the context of the HIV/AIDS struggle for generics of essential HIV/AIDS drugs to be produced. This resonates with the many initiatives calling for vaccine justice: calls for a #PeoplesVacccine, calls by former political leaders and Nobel Laureates for the US to scrap intellectual property on COVID-19 vaccines, Bernie Sanders’ support for a global petition with over 2 million signatures calling for a TRIPS waiver, and initiatives by Africans themselves.

On 14 March, 2021, Global Union Federations, leading transnational movements like La Via Campesina, African movements such as WOMIN, the African Food Sovereignty Alliance, and all progressive civil society forces in South Africa convened a Global Assembly (Stand With Africa/Safe and Effective Vaccines for All/Healthcare and Frontline Workers of the World Unite). This assembly affirmed the need for global solidarity to achieve a safe and effective #PeoplesVaccine. The tenor was that the world must rally to Africa’s support, for us all to ensure public healthcare is central to a just recovery from the pandemic and to build an internationalist approach based on the ethics of care of health and other frontline workers. This was based on the conviction that we form a human community and share a common global challenge and therefore need to unite. This struggle needs to be intensified across borders, in our communities, in our workplaces and in our movements.

The outcomes from this Global Assembly have been shared with the leaders of the rich countries, WHO and the WTO. The latter organization has responded recognising the call of the Global Assembly. It has also confirmed that high level engagements are happening in the WTO on the need for a TRIPS waiver for COVID-19 vaccines. However, this decision has still not been made and therefore the struggle continues.

Peoples’ power is clearly the only way to overcome the geopolitics of vaccine apartheid. It was the same in the struggle against apartheid in South Africa: mass resistance and international solidarity worked effectively together. If we succeed in overcoming vaccine apartheid many lives will be saved and the ‘end of the pandemic’ will be a reality for all.  Moreover, a defeat for big pharmaceutical companies also provides momentum to deepen transformative global solutions for the worsening climate crisis. There will be momentum to shift the world to choose earth, not carbon capitalism. Trade unions have to be at the frontline of the struggle for a safe and effective #PeoplesVaccine but also for climate justice. This challenge and opportunity lies before us all. •

This article first published on the RLS Geneva website.