Public transport is a vital service relied upon by millions of people all over the world. It is strategically important in the economic and social life of cities. Public transport unions must contest power not only in workplaces but also in the public sphere where decision-making about ownership, control, organisation and financing takes place.

This relationship between the political and industrial gives public transport unions an important strategic position. We are united in the ITF’s Our Public Transport programme. We are strengthening our industrial power in targeted cities and transport modes, and positioning ourselves politically to fight for a people’s public transport system that meets the needs of everyone. 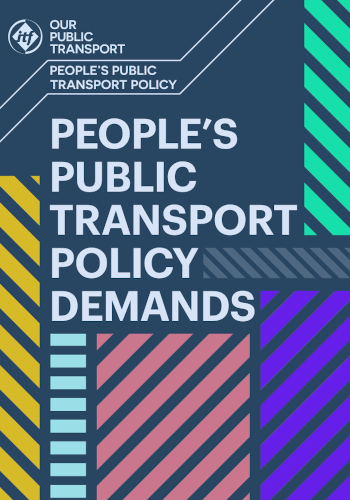 Our public transport belongs to:

Corporate globalisation and neoliberal economic policies have changed the way transport operates and led to increasing privatisation, deregulation and competition. With the consolidation of corporate power, we have seen the decline of human, worker and trade union rights as well as increased environmental degradation.

Public-private partnerships (PPPs) have introduced requirements for profit, entail higher borrowing, transaction and competition costs and often result in higher prices for those using the service. Operation of public transport has been outsourced to the private sector through competitive tendering, but it is still subsidised by local, municipal or central governments. Under these circumstances, private companies try to increase their profits by reducing operating costs through cuts in workers’ wages, working conditions and pensions, and inadequate levels of investment in infrastructure and safety systems. The needs of the public, workers and the environment are given little consideration when profit is the primary objective. A number of large multinational companies operate these public service contracts in transport around the world.

Why is there Privatisation in Transport?

There is the perception that governments have limited financial capacity and therefore need to mobilise private sector investment. For the private sector, the public sector represents the greatest potential for market expansion. Financial capital, hunting for profitable investments, is the most important driving force behind the increased pressure for privatisation of public infrastructure and public services. Privatisation of public services is often promoted by international financial institutions, such as the World Bank.

Arguments for privatisation are many. The large debt of many traditional transport companies is used to argue that government-owned companies are badly run. The reality in most countries is that the government has underinvested for many years and the transport system has become outdated.

For passengers privatisation often has negative effects on the quality of, and access to, public transport. If the private operator goes bankrupt, the government has to take over responsibilities. Privatisation can pose a risk to safety. A high safety level requires constant investment, with well-trained and experienced workers.

For transport workers privatisation often reduces wages, pensions and other benefits, increases working hours and provides less training – as the private company tries to increase its profit. Many transport functions are outsourced, and workers lose the ability to influence the decisions of the public transport authority. For women workers and informal workers, privatisation can exacerbate inequality in the transport workplace.

Many unions continue to campaign to prevent or reverse privatisation. Fighting government decisions is a challenging task and requires great effort and political support from the public. Unions also face the challenge of organising transport workers in the private and informal sectors. This often requires them to amend their constitutions and develop new organising methods. We fully support the organising of transport workers in public and private companies to win rights and decent standards.

As transport unions we can champion the expansion and improvement of public transport, while pursuing a wider set of aims to advance social equity, sustainability, and quality of life in our communities and cities.

We stand for a social model of public transport, a public transport system that is pro-public and non-profit. We believe OUR public transport should be accessible, affordable, efficient, reliable, safe, clean and integrated with a city-wide network of buses, trains, metro, ferries, taxis and trams, including cycling and walking options. For public transport to be equitable, it must be publicly owned, democratically controlled with passenger and worker involvement, good working conditions and trade union rights.

Investment in public transport is a solution to the climate crisis. By providing a high-quality service we can shift people from their cars into public transport. OUR public transport can reduce congestion and greenhouse gas emissions, improve air quality and safety, and create millions of climate jobs.

Transport workers are essential to ensuring the safe and efficient running of OUR public transport. Our knowledge, as workers, of transport operations and infrastructure means we should be involved in early and regular consultations and decision-making with local and national policymakers.

In order to win these demands, we will:

Affordable public transport is the only real alternative to the private car. All of this makes the following demands an urgent priority:

We demand that governments guarantee a ‘just transition’ for workers in the existing transport sector and ensure that the transport workers of the future enjoy decent pay and conditions as well as employment stability. If transport-related emissions are to be reduced, many new jobs need to be created. Furthermore, the creation of new, green jobs in transport must be linked to national employment policies, in line with ILO convention 122 and recommendation 169. Governments and employers must fully engage transport workers in both the formal and informal transport workforce in the planning and implementation of these expanded public transport systems. Workers who drive taxis and minibuses today have the knowledge, skills and experience to help design and staff the new public mobility services of the future.

Reducing emissions from transport will only be part of a successful energy transition if emissions in other key sectors (electrical power generation, industry, buildings, food and agriculture, and more) are also reduced. It also allows us to ask questions about the role of transport in our lives, how transport systems take shape, and how they are controlled. Therefore, we demand that government policy is based on solutions that take effect at the very heart of the global economy and will have a major impact on our way of life.

Support the Electrification of Public Transport

There has been an unjustified and unrealistic emphasis on electric cars providing the solution to decarbonisation, while there has not been enough investment in the electrification of public transport. Electric cars charged using renewable energy can help meet transport needs in the future, but much greater emissions gains are possible from the electrification of public transport fleets, including bus rapid transit (BRT) services.

The shift to cleaner, greener, electric public transport will require a considerable increase in power generation. We demand that the electrification of rail and buses is a top priority for governments and employers, as is expanding their use. There is also a role for electric taxis (including on-demand taxis) for first and last mile connections to public transport hubs. When electrification is applied with the decarbonisation of the electricity supply, through a massive expansion of renewable energy, big gains in emissions reductions can be achieved.

Work for Energy and Transport Democracy

While renewable energy generating capacity is increasing each year, overall energy demand continues to grow even faster, and therefore the use of fossil fuels continues to rise. Market-focused approaches are impeding further advances and breakthroughs. We demand that governments guarantee the faster development of renewable energy sources to support the decarbonisation of transport.

Transport unions have a visible stake in the struggle for energy democracy and public renewable power. We demand that governments subject both the power sector and the transport sector to more democratic participation and public ownership, so that the decarbonisation of both sectors can proceed unhindered in a planned and coordinated way, with a guaranteed ‘just transition’ for workers.

Developing the infrastructure and services needed to develop public transport will create jobs. For example, large numbers of charging stations will be needed, and these should be public. Their deployment could be under community-level control. We demand an integrated, ‘public goods’ approach, which is essential to the future of both sectors. •

This full report is available at ITF Global website.

The International Transport Workers’ Federation (ITF) is a democratic, voluntary and affiliate-led federation of 670 trade unions, in 140 countries, representing 19.7 million working men and women in all transport sectors.