Solidarity with Kshama Sawant: Against the Seattle Elite’s Recall Campaign

A recall election allows citizens to vote out an elected official, after a process of garnering a certain percentage of names on a petition and clearing legal challenges. Recall elections can be used by the Left to take aim at and take down corrupt or dishonest officials. But nowadays, they are also being employed by Right-wing politicians and business lobbies to challenge the legitimacy and position of elected socialists.

Over the past few months, Seattle’s political and business elites have launched a campaign to recall Seattle City Council member Kshama Sawant, a tireless community organizer and democratically elected socialist who has served her constituents since 2014. They have depicted Sawant as guilty of malfeasance for acts that do not warrant this high smear, such as spending $2,000 of city monies to support a “Tax Amazon” campaign, participating in a City Hall protest, and giving a speech at a public rally outside of Seattle Mayor Jenny Durkan’s home. 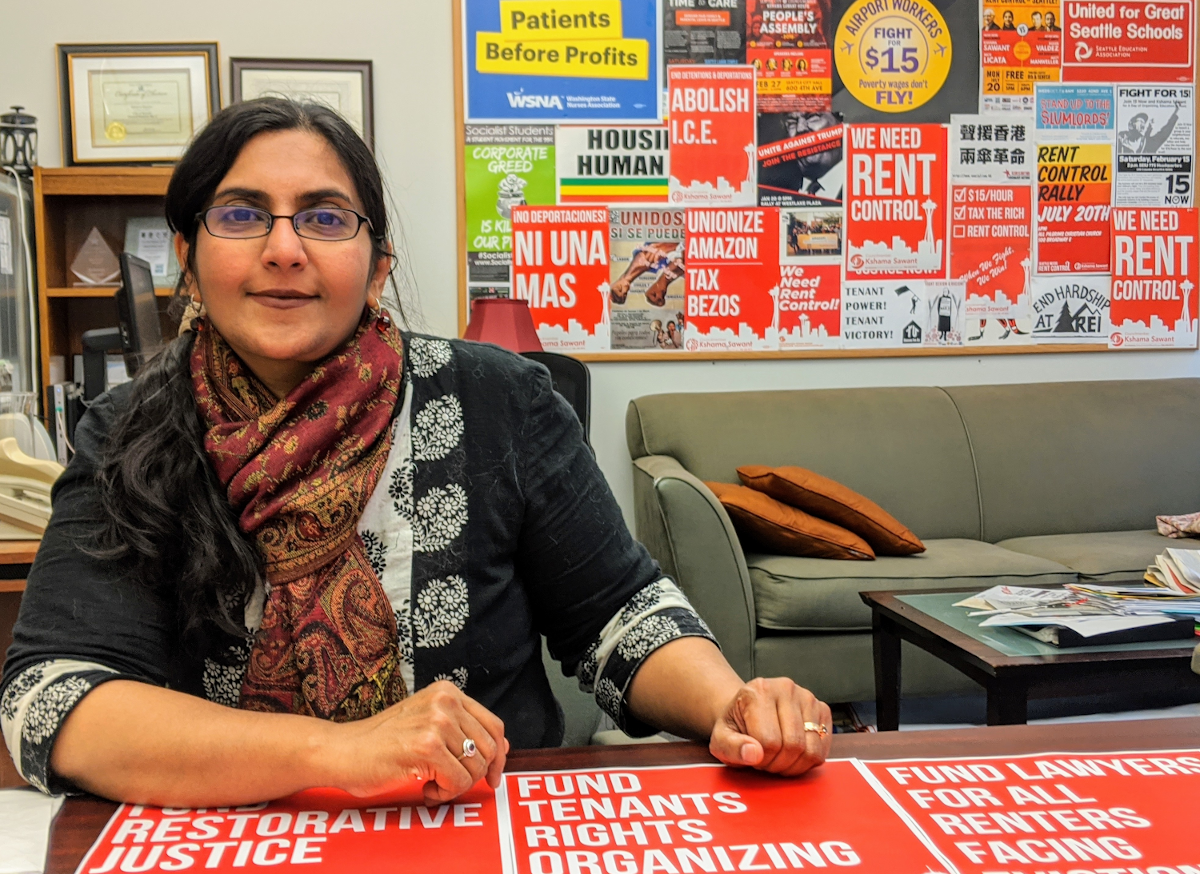 That the current campaign to recall Sawant was fronted and funded by individuals with close ties to Seattle’s establishment is not surprising, for it is these individuals whose class interests and corrupting influence Sawant boldly challenges. Indeed, Sawant has achieved much in a short period of time. Sawant has worked to raise the minimum wage for working people; brought a tax on Amazon and channeled the funds into affordable housing; supported anti-racist actions to stop police violence against people of colour and, pushed back against the power that private developers wield over municipal government.

Shamefully, the Washington State Supreme Court has ruled in favour of allowing the recall of Sawant to proceed. In this regard, the effort to recall Sawant is a brazen attempt to silence Sawant and stymie the socialist renewal she has inspired and led in Seattle for many years. And beyond Seattle, the campaign to recall Sawant is an effort to discredit and weaken the new and emerging socialist movement across the United States. In this context, the recall is an instrument of both municipal and national class power, wielded by elites to not only subvert Sawant, but also, to erode and create a negative public image of the steady gains made by socialists in both electoral and extra-parliamentary politics.

The Socialist Project and socialists across Canada strongly support all efforts to stop this odious recall of Kshama Sawant. •

We’re almost getting used to seeing socialists win public office, a silver lining that has appeared every election cycle since 2018. But Kshama Sawant was elected to Seattle’s City Council in 2013, five years before this was so. Now, she’s at the cutting edge of the ruling class backlash that all socialists will likely face, if they’re effective.

Sawant’s accomplishments – like any socialist in this position, not hers alone, but also those of the activists she works with and her party, Socialist Alternative – are impressive. She got Seattle to raise the minimum wage to $15, which the national Democrats are still struggling to do, even though the value of $15 has considerably depreciated since she took it up. In the wake of the uprisings last summer in response to the ruthless murders of George Floyd and Breonna Taylor by cops, she led a successful local struggle to ban the police use of choke holds, as well as chemical weapons and other violent means of crowd control. Like Julia Salazar in the New York State Senate, Sawant has also succeeded in expanding renters’ rights.

Sawant has also led a three-year, ultimately victorious battle to pass legislation taxing large companies to pay for crucial social needs. That bill, which became law last summer and goes into effect this year, will initially fund coronavirus relief but will later fund affordable housing, help address homelessness, and support a local Green New Deal. The legislation, which passed the city council by an enthusiastic 7-2, grew out of Sawant’s “Tax Amazon” campaign and was a major political defeat for Amazon and the rest of the city’s ruling class, which has been fighting her efforts hard for the last three years.

That’s why, although Sawant won reelection in 2019, the elites are not accepting the results. Instead, they’re waging a well-funded recall campaign against the socialist public servant. The pretext is pathetically thin: the recall petition accuses Sawant of illegally using city resources for the Tax Amazon campaign and revealing the mayor’s confidential home address to protesters, among other charges. Sawant denies those allegations and in general, denies breaking the law. Last week the Washington State Supreme Court ruled that the recall could go forward, which means Amazon (um, I mean the grassroots efforts supporting Jeff Bezos in his struggle against one socialist city councilor) can begin petitioning. The recall election is expected either to be held on this November’s usual Election Day or early next year.

Centrist Democrats like Seattle mayor Jenny Durkan, who don’t like Sawant’s successful redistributive politics or her efforts to reform the police, are working with Amazon to shut down democracy, as the Nation magazine reported in February. Durkan, who has been strenuously calling for Sawant’s “investigation” and removal, was elected in 2017 after being the lucky recipient of $350,000 from Amazon, which was at the time the company’s biggest political donation ever, through a Seattle Metropolitan Chamber of Commerce–sponsored organization called Civic Alliance for a Sound Economy, which then gave the money to another shadowy PAC called People for Jenny Durkan. (Quite a loose definition of “People” seems to be at work here.)

The recall campaign against Sawant shows that although corporations will sometimes stand up for democracy under public pressure and when it benefits centrist Democrats, they’re more than happy to jettison its formal niceties to stop serious multiracial socialism.

The episode finds a parallel in an earlier era of American socialist electoralism. More than a century ago, Anna Louise Strong, a young Communist and a journalist, was elected to the Seattle school board with strong union support. Because of her pro-labor, anti-capitalist politics, including support for the Bolshevik Revolution and opposition to US involvement in World War I, she, too, was targeted for recall, and ousted in 1918. (The following year, she was one of the leaders of the 1919 Seattle General Strike.) Like Sawant, she used the recall campaign against her as an opportunity to educate the public about the evils of capitalism and big business – but let’s hope the outcome of Sawant’s battle is a better one. 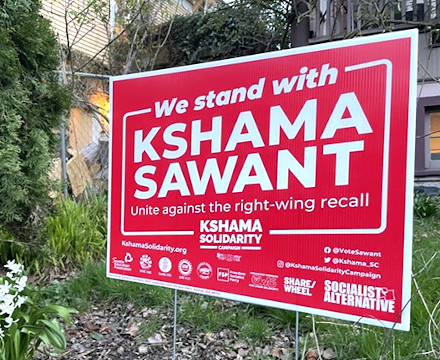 The recall organizers have absurdly posed as ordinary folks – “no billionaires” – but that’s absurd given how hard Amazon has been fighting Sawant for years. Top donors to the recall effort do include retirees you’ve never heard of – you can see where the issue would attract a mix of Fox News–watching Trumpy and Bernie-hating Resistance 1 percenters – but as the Capitol Hill Seattle Blog has reported, higher-end contributors include Jeannie Nordstrom, an heiress to the Nordstrom department store fortune. More significantly, the Stranger, Seattle’s venerable alternative weekly, has documented extensive coordination on the recall campaign among the city’s real estate industry and local ruling class. Clearly, Amazon doesn’t want to appear to be funding the recall, but their support for the effort is easy to trace in the person of their bought-and-paid-for mayor, Jenny Durkan. Curiously, the Recall Sawant campaign’s grievances against Sawant are exactly the same as Mayor Durkan’s!

It’s been revealing recently – as it was in the aftermath of January 6 – to see capitalists forced to take a position on democracy itself, as, in response to threatened boycotts from civil rights groups, Atlanta companies like Coca-Cola have been forced to oppose Georgia’s racist voter suppression law. Major League Baseball moved the All-Star Game out of Atlanta. Texas companies are now quickly caving to pressure to oppose similar proposed voter suppression laws there. Capitalists know that democracy is pretty popular, so they’ll stick up for it when forced to do so. They know that without voting, our system would have no popular legitimation and would be vulnerable to takeover by unpredictable strongmen.

Every now and then, though, they expose their own hostility to popular self-rule, as they’re doing in Seattle. No one asked what Seattle’s ruling class thought of democracy, yet their position turns out to be a resounding thumbs-down.

Capitalism is bad, but a capitalism without minimal respect for democratic processes would be even more dystopic. It’s always tempting for the elite to turn against democracy because, by definition, they’re in the minority. When they try, as they’re doing in Seattle, they need to be discouraged not only by fierce opposition but humiliating defeat.

Every socialist should be defending Kshama Sawant right now. We can’t let the plutocracy win this one. •

Stand with Kshama Sawant Against the Right-Wing Recall!

Big business and the right-wing are using the courts and their deep pockets to try to silence Seattle City Councilmember Kshama Sawant with a recall campaign. They are furious about her consistent support for the Black Lives Matter movement and the victories she has spearheaded with her socialist council office, including the Amazon Tax, the $15 minimum wage, and landmark legislation for renters’ rights.

During our 2019 re-election campaign, Amazon, big real-estate developers, and even Trump donors unleashed a record-breaking onslaught of corporate cash in a failed attempt to unseat Kshama. This time they have already amassed a quarter million in dark money, including from corporate backers like billionaire Trump donor Martin Selig, Merrill Lynch Senior VP Matt Westphal and the billionaire Nordstrom family.

As ordinary people face a historic pandemic and recession, we need Kshama’s voice in City Hall more than ever. Take the pledge to stand with Kshama!

As We Defend Against The Right Wing Recall, We Also Campaign For: