In so far as participating in bourgeois democracy remains a component of socialist strategy in Canada, voters on the Left are largely limited electorally to the New Democratic Party (NDP). As with many western socialist and social democratic parties, however, the federal NDP has been following a steady course of neoliberalization over the past decades. The party’s commitment to the workers’ movement and its own foundational labour-centred principles have been jettisoned in favour of a far more moderate political project.

The central drift of the NDP has yielded a party that broadly prefers means-testing to universalism, prioritizes the votes of marginal left-leaning Liberals over socialists and labour, and has seemingly abandoned any serious efforts to bring marginalized non-voters into the political process through bold mobilizing policies.

Even as Canada’s ostensible left party has become the ‘left Liberals’ (in the vein of the ‘Third Way’ that took hold of social democracy in the 1990s), socialist voters are severely limited in their search for other options. This past fall, there was a brief hope that the Green Party might develop into a viable socialist alternative to the NDP, as eco-socialist Dimitri Lascaris launched a credible bid for the party leadership, but, unfortunately, he was defeated by centrist candidate Annamie Paul. Given the absence of left electoral alternatives, there is no lack of debate about whether the NDP can ever be shaped into a useful vehicle for the left, either organizationally or electorally. 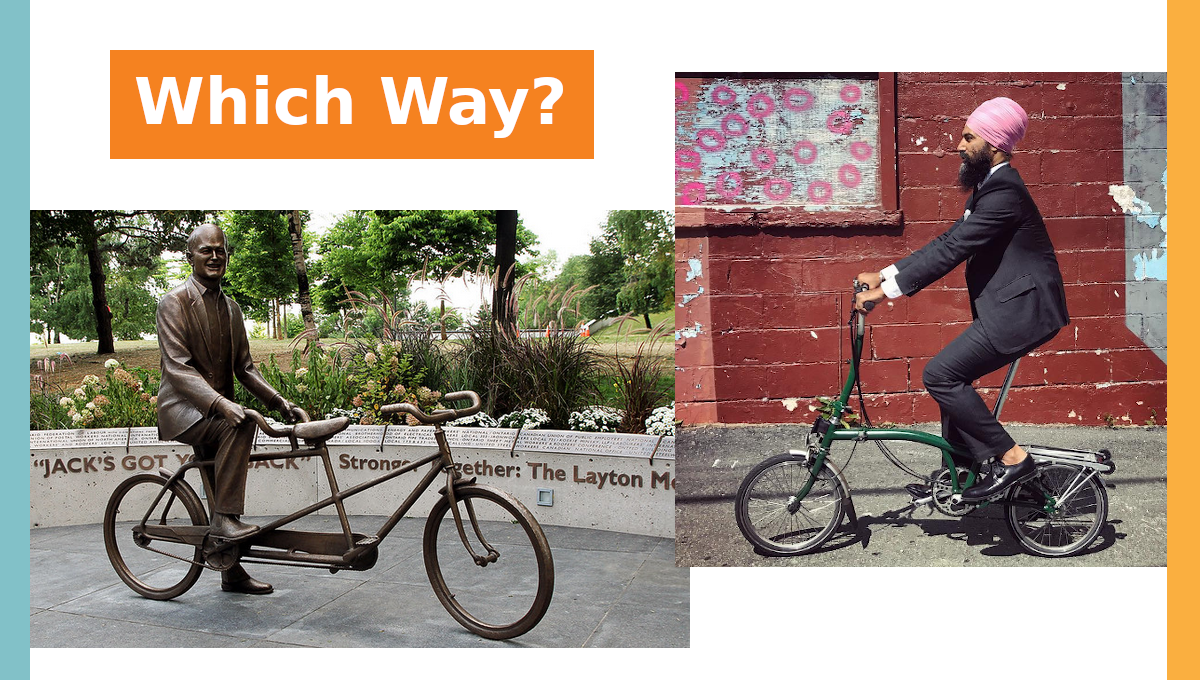 The recently published 2021 NDP Resolutions provides a useful barometer of where the energy of the NDP membership is currently focused. The Resolution Book is a collection of proposals from NDP members, either related to policy or to internal party organization and strategy, that will be voted on at the upcoming party convention running from April 9 to April 11. Resolutions are submitted by party members to their respective Electoral District Associations (EDA), where they are debated after which each EDA decides which resolutions will be submitted to the convention. The 2021 Resolution Book contains 480 such resolutions divided among seven categories. These resolutions are then ranked in a prioritization vote prior to the beginning of the Convention. At the convention, the resolutions will be put to a vote, and those that pass are added, in theory, to the party’s Policy Book and platform.

The Resolution Book is a mixed bag, with some solidly progressive proposals on the table, along with the predictable unimaginative liberal pablum. Regardless of which resolutions are supported at the convention, there is significant cause to be sceptical of the internal democratic structure of the NDP. The withered processes of the NDP’s internal party democracy should limit any excitement about the potential radical implications of the 2021 Resolution Book. The Resolution Book captures some of the left-wing energy within segments of the party membership but is far from what can realistically be achieved within the existing structure of the party in the near future.

In the 2021 Resolution Book are several proposals that, if adopted by the NDP, would have the potential to shift the party back to a long-abandoned worker-centred orientation.

Among the resolutions, one will find calls to abolish billionaires by way of a 100% tax on wealth over $1-billion (01-01-20) [Eds. resolutions are divided into 7 sections, and then numbered sequentially, followed by -20], proposals to nationalize Canada’s five major private banks (01-84-20), and to re-establish Connaught Labs as a public institution (01-02-20). There are also several resolutions targeted at enhancement of working-class organization and protections through increased union density and supports, greater access to unions for part-time and contract workers (01-05-20), an amendment to the Canada Labour Code to ban replacement workers during strikes and lockouts (01-12-20), and an extension of the right to strike (01-10-20). A few of the resolutions also support popular ongoing progressive projects like the struggle for a $15 minimum wage (01-03-20), free public transit (02-01-20), and indigenous Land back campaigns like 1492 Land Back Lane (05-36-20).

There are also several principled anti-imperialist foreign policy resolutions, an area that the NDP has been particularly absent from in political debate in recent years. For instance, resolution 04-33-20 calls for Canada to oppose any foreign intervention in Venezuela, and for Canada’s withdrawal from the Lima Group. Similarly, resolution 04-41-20 calls for Canada to withdraw from NATO, while resolution 04-42-20 proposes the elimination of the Canadian Armed Forces as an institution. A number of proposed resolutions would also see the party take a much firmer anti-apartheid stance on the subject of Israel-Palestine. As well, several resolutions appear with the aim to make structural changes to the party itself. Most notable are resolution 07-01-20 calling for the establishment of an NDP workers’ caucus, and resolution 07-12-20, which supports the reassertion of the NDP as an explicitly socialist party with the goal of public ownership and democratic control of the major means of production, distribution, and exchange spelled out in the party constitution.

Given that each EDA can submit their own list of proposals to the book, unsurprisingly, a significant amount of overlap – even redundancy – can be seen among many of the 480 resolutions. For instance, resolution 02-07-20, calls for the support of the Green New Deal, as well as resolution 02-20-20, which calls for investment in a Green New Deal. This also means that for every radical policy resolution, a number of related resolutions propose a far more timid left-liberal approach to the same problem.

Take, for example, the issue of police violence. The Resolution Book contains several bold proposals on this issue, for example, resolution 06–24–20, which calls for the defunding, disarming, and disbanding of police forces across Canada, and resolution 06-16-20 proposing the defunding of the RCMP with the goal of abolition. These proposals, however, sit alongside far weaker managerialist resolutions, like 06–01–20, which proposes to combat racism by “increased education and training of the RCMP and all police forces regarding the realities of systemic racism,” or 06–05–20, which seeks to prevent racially motivated police violence by establishing more stringent hiring criteria for RCMP officers.

It will be telling to see which versions of these resolutions are supported at the convention, and make their way into the party’s Policy Book, fitting neatly within the NDP’s strategy of courting Liberal voters.

The Challenge of Party ‘Democracy’

The presence of many promising progressive – even a few socialist – proposals in this year’s Resolution Book could be taken as an encouraging sign of the NDP remaining a vehicle for a re-emergence of socialist politics in Canada. It reflects, in part, an appetite among a block of the party’s membership, especially among younger members, for a more radical political direction. In theory, if these resolutions pass at the upcoming convention, they will be added to the party’s Policy Book and become components of the next NDP electoral platform. This is the pitch for how the NDP can be democratically transformed into the labour-centric party that socialists have been hoping for.

There are, however, significant reasons to question this reasoning and to be sceptical of the ability to fashion a socialist political turn of the NDP through the formal means of party democracy. For one, not all members are eligible to attend the convention and cast votes on resolutions. Each EDA is assigned a certain number of delegates. The EDA then must select delegates from within their membership pool to attend the convention and cast votes. Even putting aside the question of direct vs delegated voting, the ability to democratically participate is further limited by the steep registration fees for the virtual convention. The standard delegate registration fee is $150, and $99 for unwaged and youth delegates. These fees are likely to prove prohibitively expensive for some members wishing to attend, especially the younger members who are also more likely to support the more radical resolutions. But past policy conventions also point to more substantive blockages.

Lessons from the 2018 Convention

The party’s Policy Book is supposed to contain all policy-related resolutions that have been passed at previous conventions. However, a recent report by the Courage Coalition has found that of the 29 policy-related resolutions that were passed at the 2018 party convention, only 13 were actually added to the Policy Book (Courage 2021). The remaining 16 resolutions appear to have been abandoned either by simple error or by intent through the exercised discretion of the party leadership. As pointed out in the Courage report, such discretion is a breach of the NDP’s constitution, which establishes the convention as the highest decision-making body within the party. 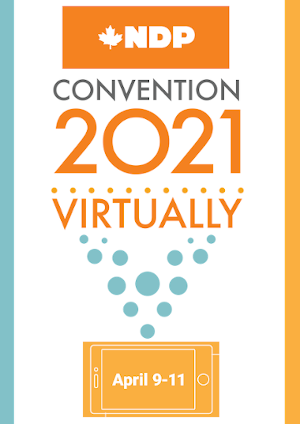 These omissions from the Policy Book are, in formal terms, egregious trespasses of the party’s ‘democratic’ structure. It is especially troubling that among the omissions are several of the more left-wing resolutions passed at the 2018 convention, like resolutions against airport privatization, for worker inclusion in the creation of national food policy, demands for paid sick leave for all workers, calls for full drug decriminalization, support for the findings of the human rights tribunal on First Nations child welfare, banning police ‘carding’, and committing to closing the gender wage gap. Additionally, the resolution in support of implementing a universal dental care program, which was nearly unanimously supported at the 2018 convention “is nowhere to be found in the Policy Book, and was substituted with a much weaker means-tested dental care proposal in the NDP’s 2019 election platform” (Courage 2021).

This history undermines the credibility of the NDP’s internal party democracy and the ability of a grassroots socialist movement to broker a political shift within the framework of the party. Regardless of how promising some of the ideas put forth in the Resolution Book appear, or a successful convention vote, the resolution may be rendered moot by the party executive if determined to be politically inconvenient.

The 2021 Convention and Beyond

The 2021 NDP Policy Convention has re-sparked a longstanding debate on the Canadian left (given new life by the experiences of Jeremy Corbyn in the British Labour Party and Bernie Sanders and the US Democratic Party): can the NDP be leveraged through grassroots organizing into an instrument of democratic socialism or will the entrenched leadership succeed in continuing to push the party to the political center? The Resolution Book, and its fate at the Convention and beyond, is another test of the viability of the NDP as an electoral vehicle for socialism or, at least, a space where socialist ideas might make it into an electoral manifesto. A number of radical policy positions have been put forth by members for consideration, and their success or failure at the convention will serve as a survey on the political sensibilities of the party membership (or, at least, of those who were chosen to attend and could afford to do so).

An even bigger test will be seeing what happens after the convention. Which of the successful resolutions will actually appear in the Policy Book? The party constitution prescribes that they all should, but recent history has shown that, in convenient fashion for the party leadership, more progressive proposals may be jettisoned entirely or, as in the case of dentalcare, replaced by more moderate, means-tested policies.

The Canadian left has been at an impasse since the 1990s with the defeats of the fight against NAFTA, the turn to the Third Way by NDP provincial governments, and the steady decline of national coalitions and movements (with Quebec on its own but not dissimilar course). The NDP has not proven to be fertile ground for an exit from the impasse, despite major efforts like the New Politics Initiative of the early 2000s or the more recent Leap Manifesto calls for a green left turn of the party. These both resulted in more disarray on the left than renewed energy and ecology of lasting institutions. One can certainly hope for a good run for the slate of progressive resolutions at the convention and a left that is more organized and stronger as a result. But the challenge of finding points of convergence and new organizational capacities for a left of struggle and vision will still be far from resolved. •

Bruce Kecskes is a Toronto-based writer and researcher concerned with issues pertaining to labour and political economy. He is a co-host of The Scarlet Standard podcast.